A change of boss is just the tonic for Regent 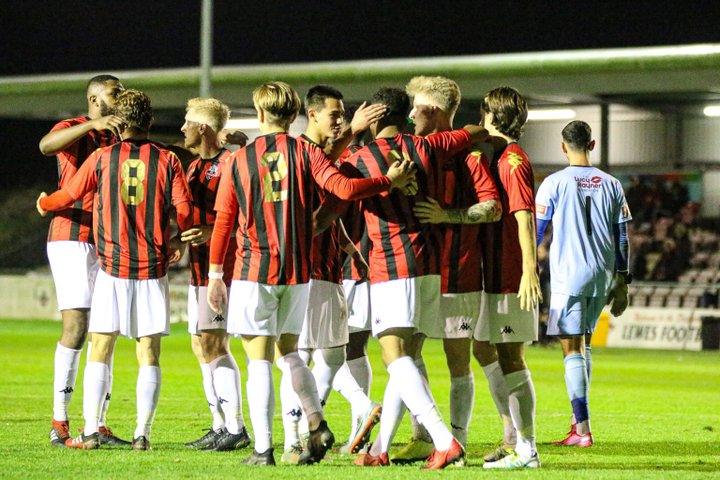 We had a number of highly entertaining matches in Premier, South Central and South East last night- and plenty of drama! Here's our round up.

Brightlingsea Regent changed their manager this week, and the new management team of Tom Austin and Ryan Salter couldn’t have had a better start to their tenure as they saw their charges wallop Leatherhead by three goals to nil. Regent had lost five of their seven matches prior to last night, picking up only one victory, but by half time it was clear they had already secured victory number two as Zach Birse and Jake Clowley- who got two- had already put them out of sight. Regent climb out of the relegation places and up to nineteenth.

East Thurrock United are still in the bottom two, but will be feeling much more positive about the world this morning after a three-two win over Horsham, their first win of the campaign. They were made to work for it, as two goals from Charlie Harris ensured the Hornets were continually in touching distance, but in the end the opening goal from Luke Illsley and two more from Zenon Stylianides were enough for the Rocks to take a valuable three points.

The side replacing United at the bottom are Merstham, who lost one-nil at Lewes. The match hinged on a disputed penalty, a foul on Aaron Cosgrave- or not, depending on your point of view- leading to a penalty kick which Cosgrave coolly fired home after a lengthy stoppage during which Merstham talisman Calvin Ekpiteta received a second yellow card for his protests. The Rooks are up to sixteenth, Cosgrave is up to five for the season, and the home fans got to celebrate an unprecedented second home victory in a row! Our images, from James Boyes, shows a Rooks celebration- and you can see the rest of the pictures from last night here.

Wingate and Finchley climbed up the table by recording the biggest win of the evening, as they defeated Corinthian-Casuals four-one helped enormously by a hat trick from Ahmet Rifat. With only thirteen minutes to go the match was poised at one-one, Rifat’s opener cancelled out by Jack Strange for the visitors- and then two goals in six minutes from the Blues number six and a last minute effort from Duane Ofori-Acheampong gave the result a rathe positive look for the home side. Casuals end the night one place behind their hosts in fourteenth.

Hornchurch have finally begun to click, and they demolished Cheshunt to record a second successive win against a top five club. The visiting Urchins did most of the hard work in the first half, George Purcell and Chris Dickson giving them a two goal cushion by the break, and Charlie Ruff made sure midway through the second half to seal a three-nil victory.

Finally, Enfield Town climbed to second, with Josh McLeod Urquhart getting the only goal of the game against Margate just after the hour mark. That’s the Towners third one-nil win of the season so far. Gate are down to twentieth.

The North Division had no fixtures last night but does have one this evening, as Cambridge City host Felixstowe and Walton United.

Into the South Central Division then, and Waltham Abbey are three points clear at the top- but could have extended that lead to six if they’d been able to hold on and defeat Chipstead. Billy Holland got his third of the season to put the Abbotts ahead on the half hour, but exactly thirty minutes later James Dickson equalised for the Chips, and that’s how it remained. Chipstead are sixteenth.

Hanwell Town could have gone into second place with victory over Northwood, but instead became one of four clubs to end the night on ten points after they were held one-one. It goes almost without saying that Ogo Obi got the Geordies goal, his eleventh of the campaign, and it put them ahead on the stroke of half time; but an equaliser from George Isaac ten minutes after the restart earned Woods a point whch lifted them to fifteenth.

Ware are up to sixth. The Blues inflicted another defeat on another set of Blues, struggling Barking, who remain in last place. Leigh Rose for the hosts and Junior Luke for the visitors saw the sides go in level at the break, But a goal from Marcus Milner just after the restart and one from Reece Crowther with twenty minutes remaining saw Ware take a three-one win.

Hertford Town are up to seventh following an impressive win at Westfield. Aidan King put the hosts ahead just before the break, but Luke Theo Gymer levelled for the visitors two minutes later, the same player put them ahead twelve minutes after that, and David Ogbonna made it three sixteen minutes from time.

Chertsey Town slipped down the table, whilst Marlow moved upwards, courtesy of a hat trick from James Clark as they won three-nil at Alwyns Lane. That takes Clark up to nine goals for the season, and two hat tricks so far, as he also got one against Westfield ten days previously. Marlow climb to ninth.

Bedfont Sports, aided by Sonic the Hedgehog (see Twitter for details), are up to twelfth with a two-one win over Chalfont St Peter. Daniel Opoku-Boateng put Sports ahead after half an hour, and although Sydney Ibie soon equalised from the spot, a second half goal from Scott Weight saw the hosts take the points.

In the South East Division, and Hastings United climbed ominously into second place with victory over Three Bridges. Ben Pope kicked things off in the tenth minute, opening the scoring, and Pope got the second, too, from the spot after sixty eight minutes. By that point there were only nineteen men on the pitch, as United defender Ollie Black had received his marching orders, as had Brannon O’Neill and Steve Smith for the visitors- and the hopes of nine-man Bridges were finally extinguished as Davide Rodari, welcomed back after a long injury lay off, made it three with eight minutes to go.

Ashford United got back to winning ways after three games without a victory as they defeated Whyteleafe two-nil at Homelands. Both goals came in the first half, Jack Steventon and Johan Ter Horst lifting the Nuts and Bolts up to ninth, below their visitors only on goal difference.

Witham bid to borrow Braintree's fans- and pay them a hire charge!  Innovative Witham Town offer to pay Braintree Town for every Iron fan who heads to the Simarco Stadium