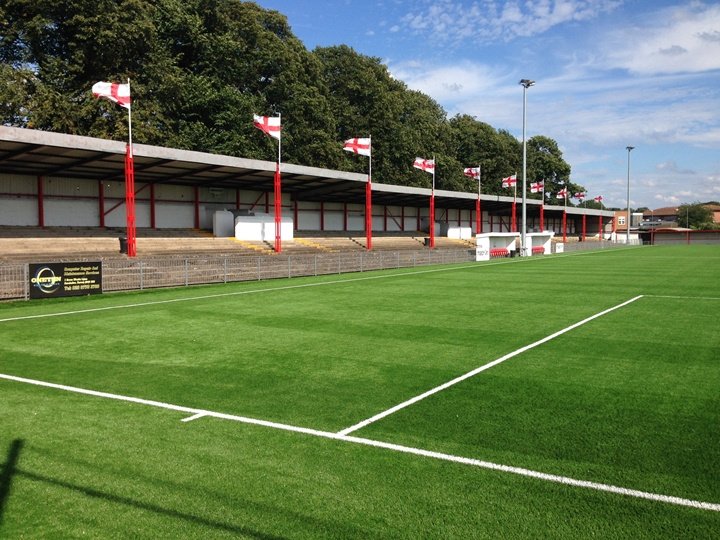 Pre-season friendlies are often thought of as rather meaningless, yet despite that victory over a higher-ranked side can give teams a psychological boost going into the new campaign, and on that basis there will be a great deal of positivity at Hullbridge Sports and Cray Valley PM this morning.

Sports entertained Bishop's Stortford, who had got off to a flyer at the weekend scoring ten goals. Well last night the Premier Division Blues were on the receiving end of a drubbing, as Kieran Bishop, Lewis Watson and Liam Nash- with two- sent the sadly invisible home crowd home happy.

Cray Valley also took on Premier Division opposition, and another side in blue, as Margate arrived at Badgers. The result was identical to that at Hullbridge, as they struck four goals without reply- Ade Yusuff, Matt Warren, Hassan Ibrahiym and Francis Babalola gave the Millers a night to remember.

Elsewhere, and in no particular order, Carshalton Athletic defeated Ramsgate by three goals to two- and we won't spoil it entirely by giving away the scorers, as you can watch it here.

Leatherhead went down 2-1 at home to AFC Wimbledon. We don't know who scored the Tanners goal, but you can watch some of the match courtesy of Mick Sullivan and Gary Pascoe by heading here.

Cray Wanderers took on SCEFL side Hollands and Blair, and played out a two-all draw with both of Wands goals coming from trialists.

Canvey Island defeated Hashtag United two-one, and you can read a report of the match by heading here. Gulls goals came from Albert Levett and a trialist.

Burgess Hill Town took on neighbours Hassocks, and came away with a three-two victory. Nathan Cooper, Alex Laing and Josh Short got their goals.

Waltham Abbey played a four-four draw at New Salamis of the Spartan South Midlands League. We don't know who got the Abbotts goals, but we do know that Appiah and Koranteng were on the scoresheet.

Staines Town went down four-one at home to Welling United of National League South, with Sebastien Osei-Obengo getting the Swans goal from the spot.

Northwood travelled to Hayes and Yeading United, and the home side won by five goals to three. Woods goals came from a trialist, Diogo Da Silva and Lucas Toti.

Folkestone Invicta were two one winners against Deal Town. We believe that Paxman and Smith got the goals.

Hornchurch defeated Chelmsford City one-nil, but we've no idea who scored it!

Herne Bay won two-nil at Fisher, Grant and Fagan with the goals.

Finally, Whyteleafe defeated neighbours from just up the road, as SCEFL side Croydon travelled to Church Road. Leafe won two-nil with goals from Andrew Sesay and Ryan Gondoh. You can read a report of the match here.