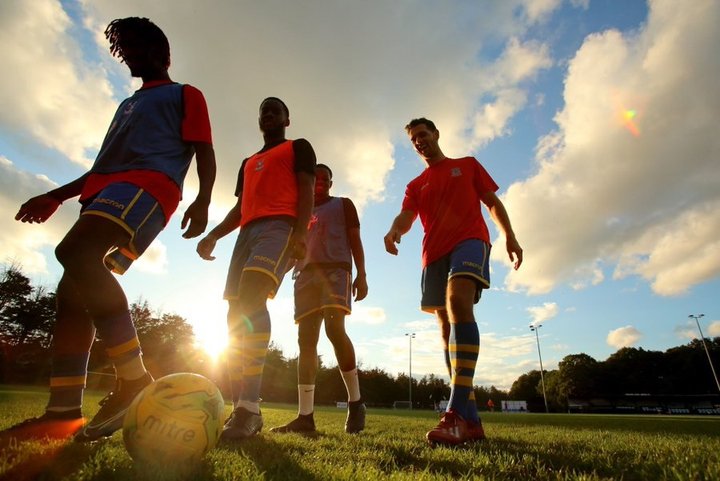 We had a number of pre-season friendlies last night. Here's a- perhaps not entirely comprehensive- round up.

It was a rather busy Tuesday evening, as many of our clubs took part in behind-closed-doors pre season friendlies. Who knows, perhaps we might be able to open those closed doors in the near future? News on that when we have it.

We've taken a quick trawl of social media, and here are last night's results. If we've missed any, please let us know.

Kingstonian took a trip down to South London to take on Colliers Wood United, and left with an eight-one victory. Buchanan and Coker both notched hat tricks, Lawson and Sow got the others. Our image above is from Simon Roe, and you can see many more by heading here. By the way, over in the K's club shop you will find Simon's book documenting last season's FA Cup run, and it looks fabulous.

Raheem Sterling-Parker, Omar Koroma and Dan Bennett gave Carshalton Athletic a three-one win over Beckenham Town, a match which has hit the headlines this morning after the Robins Twitter feed described a moment of madness from an opposition player. We'll let you read about that for yourselves!

Grays Athletic picked up a victory at Ware. Tony Stokes and Darrell Russell scored for the visitors, Dam Rumens for the hosts, as the match ended 1-2.

Tom Wood scored for Cambridge City, but it wasn't enough to stop Mildenhall Town, who got two- whilst Manny Ogunrinde scored the only goal of the game as Aveley defeated Waltham Abbey.

Westfield hosted Hartley Wintney and the visitors won by four goals to two. We don't know who scored.

Whitstable Town travelled to Deal Town and left with a two-one victory. Etumnu and Millbank struck for the Oysterboys.

Dereham Town travelled to Fakenham Town and came away with a four-one win. All the Magpies goals came in the first half, through Frary, Hipperson (2) and Quantrell.

Uxbridge fell to a two-nil defeat against Chesham United.

East Grinstead Town took on Walton Casuals, but we've no idea how it ended! Let us know if you happen to know the result.

Herne Bay travelled to Rusthall, and won by four goals to two. Johnson, Walters, Bewick and Cooper scored for Bay. Cray Wanderers had a similar result, but reversed, as their opponents Corinthian got the four. Wands two came from Taylor and Allen.

Haringey Borough defeated New Salamis by one goal to nil. We don't know who scored it, but we do know that it came very late indeed.

Tooting and Mitcham United defeated Tooting Bec by two goals to one to win the Pride of Tooting Award (yes, we just made that up). Cani and Rose scored for the Terrors.

Faversham Town hosted Folkestone Invicta, and the visitors won by three goals to one. Heard got two for the visitors, and we're not sure of the third. We don't know who scored for the Lilywhites, only that it came before the break!

Abs Seymour got the only goal of the game as Barking defeated Walthamstow.

Bury Town won four-nil at Saffron Walden Town. Will Gardner got a hat trick, and the other goal came from Cemal Ramadan.

Eastbourne Town and Hastings United played out a goalless draw.

Fitzer, Baxter, Watson and Scarborough scored for Hullbridge Sports as they defeated Stansted by four goals to one.

Ashford Town won three-one at Cobham. French and Fitzgerald scored for the Tangerines, we're not sure on the third one.

Basildon United went down five-one at Needham Market, whilst Corinthian-Casuals played out a one-one draw at Abbey Rangers, scorer unknown. Felixstowe and Walton United fell to the only goal of the game at Brantham Athletic.

Horsham won three-nil further up the A264 at Three Bridges. Lavery got two, and O'Toole got the third.

And we think that's your lot- unless you know different!

FA Cup early rounds- draw released  Here's the news you've been waiting for, as we announce the draws for the FA Cup Extra-Preliminary and Preliminary Rounds 2020-21