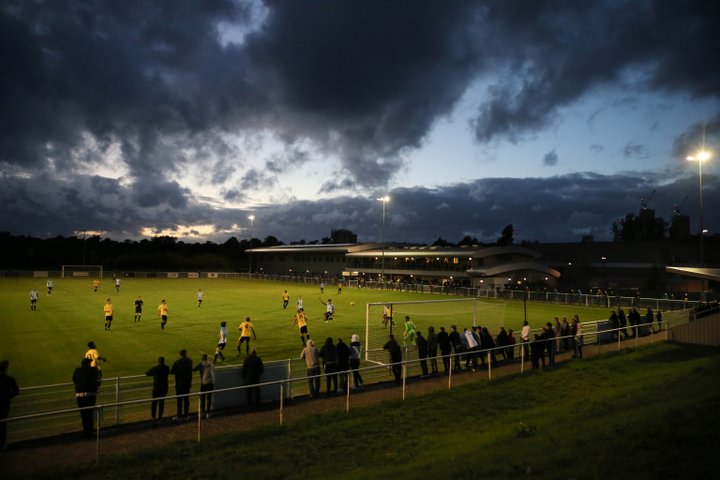 We had rather a lot of friendly fixtures last night- and a couple of postponements. Here's a round up of the action.

We're going to start with an actual competitive match- the first one of those we've had to write about since March. Wingate and Finchley travelled to Hendon to compete in the Semi Final of the London Senior Cup, and fell to a three-one defeat. Goldy Capela put the visiting Blues ahead only for the Greens of Hendon to equalise and take the match to extra time, where home advantage finally counted.

Now, on with the friendlies, after going through social media division by division in an attempt- probably futile- not to miss anything!

Boachie, Baker and Trialist scored for Bishop's Stortford in a victory at Saffron Waldon Town, whilst Bowers & Pitsea defeated Maldon & Tiptree by five goals to three at the Len Salmon. McKenzie, Trendall, Cornhill and Purcell scored for the hosts, we don't know who got the Jammers three replies.

Brightlingsea Regent's match at Clapton was postponed, whilst Corinthian-Casuals travelled to Corinthian and fell to a five-one defeat, scorer unrecorded.

East Thurrock United fell to a three-two home defeat against Concord Rangers, with both Rocks goals scored by trialists, whilst Enfield Town also had a trialist on the scoresheet for their draw with Royston Town.

Goals from Sam Hasler, Dave Smith and a Trialist gave Folkestone Invicta a three-nil win at Herne Bay, whilst Haringey Borough held National League side Aldershot Town to a one-one draw, Jamie O’Donoghue with the goal.

Lewes travelled to the seaside and won six-two at Eastbourne United. Cosgrave got a hat trick, and an own goal, Barclay and a trialist found the net. Also at the seaside, only this time in Kent, Whitstable Town saw an Aaron Millbank goal defeat Margate at the Belmont.

Coggeshall Town and Ipswich Town U23's played out a goalless draw, whilst Soham Town Rangers won 1-0 away to Stowmarket Town, with Toby Andrews scoring the only goal early in the second half.

Ashford Town went down five-one at home to Hampton and Richmond Borough, Brown with a Tangerine goal, whilst we believe that Bedfont Sports defeated Met Police by two goals to nil.

Hanwell Town won two-nil at Welwyn Garden City, scorers unknown, whilst Harlow Town also got two against Woodford Town, Kayembe with both of them in a two-one win.

Westfield hosted local rivals Woking and fell to a narrow two-one defeat. Our headline picture comes from Andy Nunn, and you can see all of his work here.

Burgess Hill Town travelled to Horley Town, winning four-nil. Cooper got two, Laing and Harding got the others. Hythe Town fell one-nil at home to Deal Town, whilst Ramsgate lost three-one against Sheppey United, Ryan Johnson scoring for the Rams.

And that's your lot! More tomorrow.

Isthmian Supporters Predictions 2020-21:Maldon and Tiptree  We're off to Maldon, where Dave Garwood takes us through the delight and pain of last season, and looks forward to the next one