A midweek festival of football! 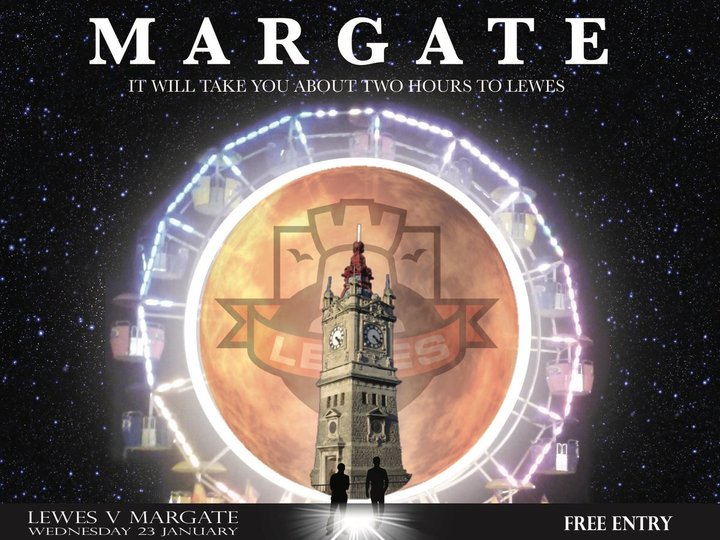 We've some big midweek matches to look forward to- including a free match on Wednesday. Here's our guide.

Our midweek festival of football began last night, as first half goals from Taofiq Olomowewe and Michael Dixon gave Carshalton Athletic victory over AFC Hornchurch despite a late reply from Sean Marks. That result left Athletic in fourteenth place, but tonight- and then Wednesday- we look to the higher echelons of the table for our Premier Division excitement.

Eleventh placed Brightlingsea Regent host tenth place Worthing tonight having picked up nineteen points from their last twenty one- and, of course, having walloped the Mackerel Men's closest rivals Bognor Regis Town on the Essex coast a fortnight ago. Tom Rothery's men must go into the match as favourites, particularly given that Worthing have lost three matches in a row- but victory for either side could see them enter the top five.

Worthing, of course, have loanee Zack Newton in the squad for their long trip, but will be missing forward Jasper Pattenden after his head injury in the defeat at Leatherhead.

Second place Dorking Wanderers will look to close the gap on leaders Haringey Borough to two points with victory over Enfield Town- but the Towners themselves will climb back into the top five with victory. Wanderers seem to have rediscovered their form, unbeaten in five since losing to Merstham just before Christmas; whilst the Towners are having a mini-slump, losing to the Moatsiders and then, on Saturday, conceding two goals in the last eight minutes at home to Corinthian-Casuals to fall to defeat. The first twenty people through the turnstile tonight will get a free programme (and the programme is very good indeed).

Wingate & Finchley have been in freefall of late, and perhaps have picked the wrong time to face a Tonbridge Angels side who seem to be finding their early season form once more. Steve McKimm's side followed a draw with Brightlingsea Regent with impressive victories over Kingstonian and Bishop's Stortford, so should travel to North London with confidence- particularly given their hosts have lost five of their last six league games. Postponed- snow.

Tomorrow, Lewes will have the chance to close to within five points of Haringey as they host Margate. This match, which was started and then abandoned ten days prior to Christmas, will consequently be free entry to all- and given the Rooks will be searching for a third successive victory and scored four goals in each of their previous two matches, surely the locals won't need much persuading to head to the Dripping Pan?

Gate haven't managed a victory since 1st December, but surely with the amount of quality in their squad their upsurgence can't be far away?

Will it begin in Sussex? There's only one way to find out.

We have critical matches at the top and bottom of the South Central Division tonight. First, a newly resurgent South Park travel to the side who are still the top scorers in the country, Hayes & Yeading United. A few weeks ago a match between the sides would have looked a definite home banker, but although United have continued to win their goals scored tally has got a little smaller, whilst the Sparks have won their last two matches and fallen to very narrow defeats against Bracknell Town and Marlow recently. A win tonight could take Jay Lovett's men as many as seven points clear of the bottom two, and whilst you wouldn't get good odds on them succeeding at the Skyex those odds must be far better than they were a month ago. . Postponed- snow.

Molesey will be hoping for a turnaround of their recent fortunes as they host Tooting & Mitcham United. The Moles have fallen into the bottom two having not picked up a point since 1st December, whilst the Terrors- apart from a loss against Hayes- have been in very good form indeed. Three points tonight would take them to within four points of a playoff place. Postponed- frozen pitch.

In the South East Division tonight, Sittingbourne will be looking for a first victory in five weeks as they entertain VCD Athletic. With a squad in transition it might be a challenge for the Brickies to break that sequence, particularly against a VCD side who will move to within a point of the playoffs if they can pick up three this evening. Athletic lost to Cray Wanderers last time out- but to be fair, so does everyone (Horsham fans don't need to write in and complain at this point, we know you were the exception to that rule!).

We have two matches in the North Division to look forward to, the first of these on Wednesday evening, when the tenants host the landlords as Grays Athletic take on Aveley. That's ninth versus fourth, but two sides who have been searching for consistency of late, the Millers having won only two of their last six whilst Athletic have managed only one victory during that same period to fall towards mid table from the fringes of the playoffs. Victory for Aveley would take them second, four points behind leaders Bowers & Pitsea with a match in hand remaining.

Then we have some Friday night football, as Brentwood Town take on current second place side Maldon & Tiptree (although of course the Jammers could be third by then). Brentwood are still looking for consistency, having followed a four match unbeaten run with only one win in their last five, whilst Maldon have only one defeat in ten. The outcome might depend on which Brentwood Town turns up, as they can be brlliant on their day- as Mildenhall Town, Romford and Felixstowe & Walton United have found out recently.

If we haven't mentioned your club, they might still have a match! There are a large number of County Cup ties this week- and you can see the entire list of fixtures here.

 Wanderers close the gap on a night of snowmageddon! We had some big matches scheduled for last night. Some of them went ahead...