A- mostly- successful night in the Cup 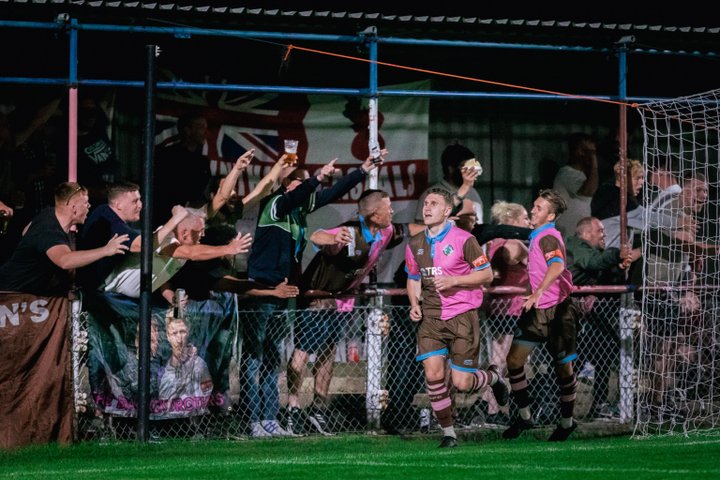 Our round up of a night when Wingate got six, Margate and Hornchurch got four, and Casuals removed Worthing.

We had some glorious cup replay successes last night, and a few results of a rather different kind.

We'll start at Basildon United. The Bees held Pitching In Isthmian Premier Wingate and Finchley to a draw in North London on Saturday, so must have been confident- but that confidence was crushed in thirty seven minutes last night- that being the time between the Blues second and sixth goals. Sam Hatton gave the visitors an early lead from the spot, but the hosts equalised on ten minutes through Fahad Nyanja and then, just before the half hour, the roof began to fall in. Ibrahim Meite made it one-two, and it was three ten minutes before the break, Darnell Goather-Braithwaite giving Wingate a cushion. After the break three goals in nine minutes turned a comfortable win into a rout, Alphanso Kennedy, Meite again and Bilal Sayoud ensuring there was no way back.

We were rather surprised when Hornchurch were taken to a replay on Saturday, but they put that right at Barton Rovers, a hat trick from Sam Higgins and a fourth from Charlie Ruff making quite sure of victory, despite Rovers getting one back from the spot.

Margate also had a hat trick hero at Thame United, Jake Embery getting three and Lewis Knight the other in a four-two win.

Over in Tolworth, Worthing's uncertain start to the campaign continued at the hands of Corinthian-Casuals. Warren Mfula midway through the first half and Bobby Mills early in the second made it two-nil to the side in pink and brown, and although Aarran Racine got one back on the hour, Mills wrapped up the win two minutes from time. Our headline image shows a Casuals celebration, and comes courtesy of Stuart Tree. See all of Stuart's shots here.

Horsham eased to a two-nil win over previously-unbeaten Haywards Heath Town, an own goal in the first half and a goal from Charlie Harris in the second making sure of progression- whilst up the A25 Cameron Black was getting the only goal of the game as Leatherhead defeated Whitstable Town.

Barking and Aveley, meeting for the first time in this round, will need a replay. Barney Williams gave the Blues the lead on the hour, Jon Nzengo equalised for the Millers seven minutes later, and that was that.

Programme and images can be found here.

And now the news we can't take any comfort from. Matt Price got a double for last season's cup heroes Canvey Island, but a late, late goal for Bedford Town saw them depart two-three. Tony Mendy scored again for Uxbridge, but Chesham United got two to progress.

South Park departed against Broadfields United, and as that was our featured match you can read about it here.

Sparks put out  South Park hosted Broadfields United, and the visitors gave them the Blues