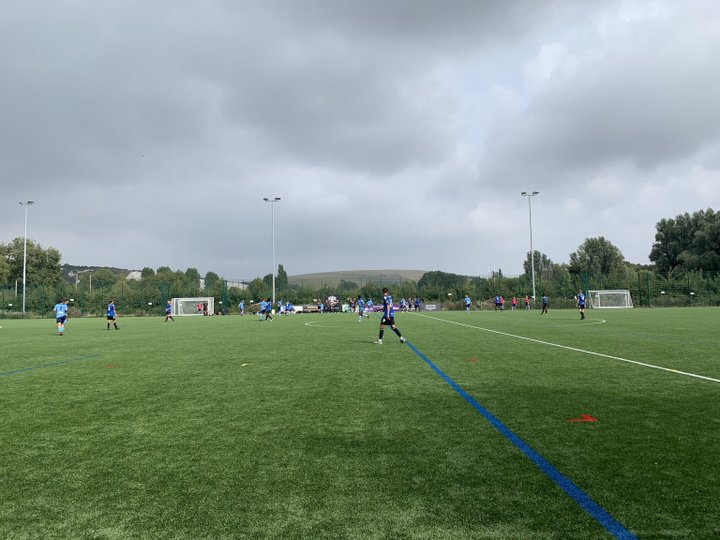 Here's a round up of today's friendly matches

We had a collection of pre-season friendly matches as our sides continue their preparation for the new season. In no particular order- and perhaps with a few missing given we're relying entirely on social media- here are the details of today's action.

AFC Sudbury entertained Cheshunt, and so far as we're aware won by one goal to nil. Who scored that goal is not apparent.

Aveley took on newly-solvent FC Romania, and goals from Ogunrinde and Gibbs gave them a two-nil win.

Basildon United hosted a Billericay Town Under 23 side, and defeated them by three goals to one. Stanley, Nash and a trialist got the Bees goals.

Bowers and Pitsea eased to victory over Hullbridge Sports. The hosts got three, and Mckenzie, Monville and Dicks found themselves on the scoresheet.

Grays Athletic fought against Burgess Hill Town in Sussex and against the chaos on the M25 to come away with a one-one draw. We know that new signing Pat Ahern scored for Athletic, we have no details of the Hillians scorer.

Cambridge City won at AFC Dunstable. Ryan Ingrey and Mike Davis got the goals in a two-one victory.

Canvey Island and Hornchurch played out a one-one draw. Connor Hubble scored from the spot for the Gulls, Winn got the opener for the Urchins.

Chichester City travelled to Brockenhurst- the only ground with its own cattle grid, unless you know different- and left with a four-nil victory. Jones, Clack, Pennery and Rowlatt got the goals. Or one of them might have come from Penny, but we don't know which one!

Cray Valley PM hosted Folkestone Invicta, and the hosts celebrated a second half goal from Gayle. Scott Heard and Jordan Wright had scored for the visitors in the first half, however. Take a look at some images of the game courtesy of Dave Cumberbatch by heading here.

Cray Wanderers didn't have far to travel, as they went to face Beckenham Town. Parker and Taylor put Wands two-nil up, and although the hosts got two in the second half a trialist got number three for the visitors.

East Thurrock United lasted Witham Town and came away with a three-one victory. Affie Cue got two in the first half, Hafeez Sanusi got their third after the break, and Jack West got the visitors consolation.

Enfield Town welcomed Brentwood Town to Donkey Lane, and the visitors took the plaudits with a three-two victory. We know that Hatton and A Trialist scored for the hosts, and that Rob Swaine got one for the visitors, but otherwise our knowledge remains incomplete!

Faversham Town won three-two at Rochester United. We believe that Harding got one of the Faversham goals, but don't know who got the others.

Felixstowe and Walton United went to Whitton United, and Kerridge, Powell and Canfer scored for them. Sadly Whitton got four.

It was North v South Central just outside Southend as Great Wakering Rovers went down three-one at home to Waltham Abbey. Nathan Koranteng, Jason Hallett and Rob Clark scored for the Abbotts, Sotoyinbo had earlier put the hosts ahead.

Guernsey travelled to the Isle of Man, and fell to a one-nil defeat.

Hastings United travelled to Alresford- home of the Watercress Line- and defeated Alresford Town by four goals to nil. Ben Pope got a hat trick, whilst Kenny Pogue got the other.

Herne Bay took on Tower Hamlets and emerged victorious. Grant, Bola and Ramadan scored for Bay in a three-two win.

Horsham welcomed Saltdean United from the seaside, and won three-nil. The goals came from Day, Miles and Harris.

Kingstonian travelled to Horley Town, and left with a one-one draw. Corie Andrews got the K's goal.

Lewes went to AFC Porchester, and came away with a two-one victory courtesy of Aaron Cosgrave and C Trialist. Rooks Chairman Stuart Fuller took the above photograph of tham thar hills and a terrible kit clash.

Margate hosted Hythe Town, and former Gate favourite Frannie Collin came back and scored two to give the South East side victory.

Sevenoaks Town ran out two-one winers over Canterbury City. We know no more!

Tilbury travelled to Burnham Ramblers and left with a one-one draw. David Knight got the Dockers goal.

Tooting and Mitcham United started life without Charlton Athletic's Hady Gandour, and managed fine as they won six-nil at Chessington and Hook. Williams, Culley (2), Brissett, Cani and Christie got the goals.

VCD Athletic entertained Leatherhead in an all-green clash. Great Evans scored the only goal of the game for the Tanners in the nineteenth minute.

Ware went to Arlesey Town and started their pre-season with a decent win, McCollin with a brace and Hope with the other in a three-one win.

Westfield defeated Banstead by five goals to three, and Knaphill by two goals to nil. They have now gone home for a rest!

We had a South East v South Central clash as Whyteleafe hosted Northwood, and it was a seven goal thriller, all of the goals coming in the first half! We believe Gondoh and Archer were amongst the home scorers, whilst Stefanoaica, Toti and Trialist scored for Woods.

Wingate and Finchley went down three-two at Beaconsfield. We've no idea of their goalscorers.

Worthing faced Whitehawk in a Sussex derby. The Mackerel Men took the lead through Marvin Armstrong, and then a trialist got a goal at each end- probably two different trialists, but who knows- as the match ended two-one to the Premier Division side.

We think that's your lot! Let us know if we missed anything!