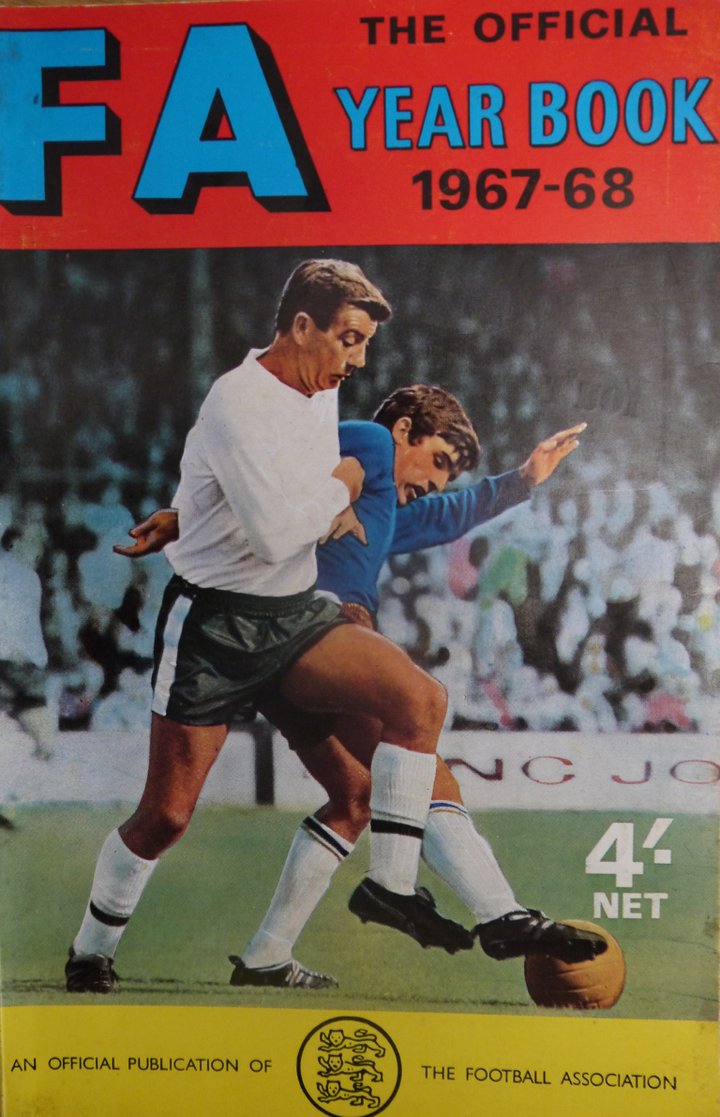 The series of FA Yearbooks were a statistician’s dream. Find out why, and remember the season (1966-67) when Enfield took the FA Amateur Cup and Sutton United won the Isthmian League

Amongst purists, perhaps the Official FA Yearbook of 1967-68 isn’t an annual at all; after all, the Association also had their “Annual Book for Boys” out at the same time. But FA Yearbooks were released on an annual basis, and, like the more regular football annuals, always tended to look back at a season just finished rather than a calendar year. The main difference between the two is that the Yearbook tends to be focused particularly on statistics, and also features all of the Non League- or “Other Leagues” final tables, so we can look at the outcomes for many of our sides who weren’t at that point in the Isthmian League.

Unlike annuals, the Yearbooks carried a fair share of advertisements, albeit some of them for the FA’s own products, like the aforementioned Book for Boys, the monthly FA News (“subscription twenty shillings”) and the FA Guide to Training and Coaching by Allen Wade, cost twenty five shillings. But you are also urged to buy your kit from Umbro or Sereena Sportswear, your boots from either Adidas, Gola, Surridge and Co or Hungaria, your floodlights from Christy Bros Ltd and your footballs from Webber Bros, all the while slurping Pepsi and smearing yourself in Elliman’s Rub, the latter endorsed by World Cup winner George Cohen. 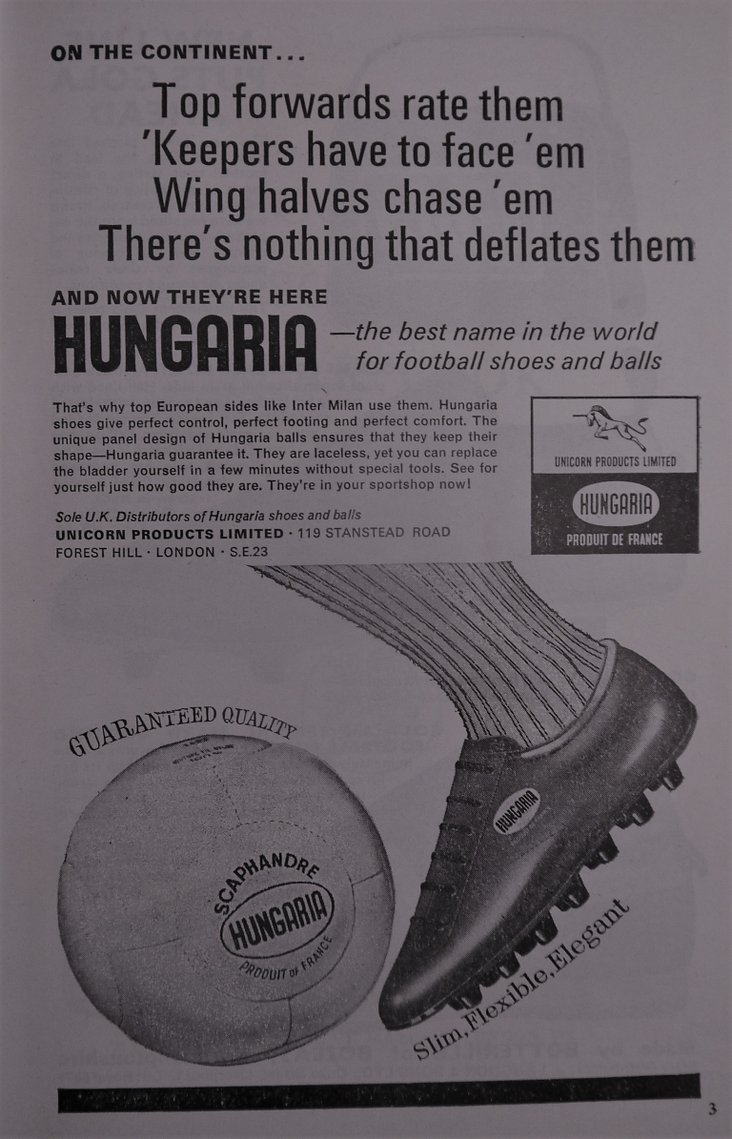 Does anyone remember Hungaria boots?

The list of FA Officials which starts the book could have been taken directly from the pages of Debrett’s. The Earl of Harewood is joined by the Marquis of Blandford, the Rt Hon Earl of Derby, Air Vice-Marshal B. Ball (sadly B doesn’t stand for Bowling, we checked), Lieut.-General Sir Anthony Read, Admiral Sir Varyl Begg, Field Marshall Montgomery of Alamein and Sir Stanley Rous. The Honourable Treasurer, S. A. Donaldson also deserves a mention, as he was an Isthmian Official from Clapton FC.

Secretary D Follows CBE opens with the first feature, which looks at the ongoing Government Inquiry into the State of Football. This, as usual, stems from a discussion started by the FA on finance- in short, on whether football should receive a larger amount of the money received by the treasury from football related gambling. It seems that arguments at high level regarding the societal worth of football aren’t at all new.

The actual football action then starts with an in depth look at the 1966-67 FA Cup; yes, please note, not the First Division or the Football League, the FA Cup. These were the days when our premier cup competition was still treated with reverence, and its winners- despite the year not ending in one- were Tottenham Hotspur, who defeated Chelsea in the Final. Isthmian interest in the competition ended in the Second Round, when Enfield fell to a four-two home defeat against Watford. Ashford Town (Kent), then of the Southern League First Division, also departed at that stage against Swindon Town.

A three-quarters of a million pound facelift of Wembley Stadium was celebrated (those who attended the stadium during the 70’s and 80’s will wonder where that money was spent- although given that’s the equivalent of ‘only’ £11,466,826.74 in today’s money perhaps it wasn’t all that much at all), whilst the results of the FA Sunday Cup- won by Carlton United with a two-nil victory over Stoke Works at Hendon FC’s Claremont Road- were printed from the Third Round stage. And then we go stat-mad, with page after page featuring all the results of England’s international matches from 1987-1967, Unofficial International Matches, B Internationals, Under 23 Internationals, Amateur International Matches, and Representative Matches played by an FA XI against the services or University sides from 1934 to 1967. 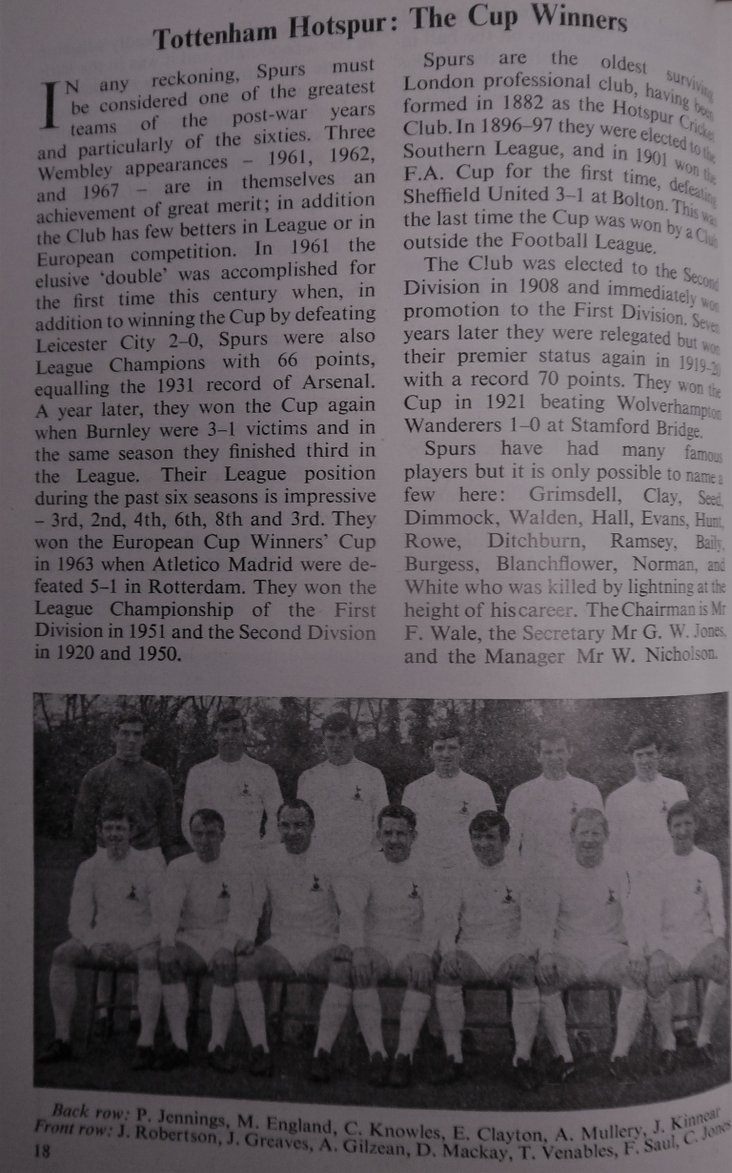 The World Cup of 1966- or at least England’s part of it- is covered in depth along with every England match of the period, but we’re more interested in the Amateur Cups awarded during the season, which included honours for the following Isthmians- five for Sutton United, five from Leytonstone, three from Hendon, two from Enfield and Wealdstone, and one each from Tooting & Mitcham United and Kingstonian:

Glasgow Rangers lost in the Final of the European Cup Winners Cup, whilst their green and white rivals did much better, the Lisbon Lions defeating Inter Milan to win the European Cup- but the FA Yearbook gives less space to their triumphs than it does to explaining the flight of a football using scientific theorem involving treacle. No, we’re not sure why, either, but it might have been useful for a few of our teams last winter, particularly Brentwood Town!

We briefly celebrate Manchester United’s title triumph, before we get back to stats, with tables and results galore. But that brings us to the Non League tables section, much of which we’ve reproduced here. 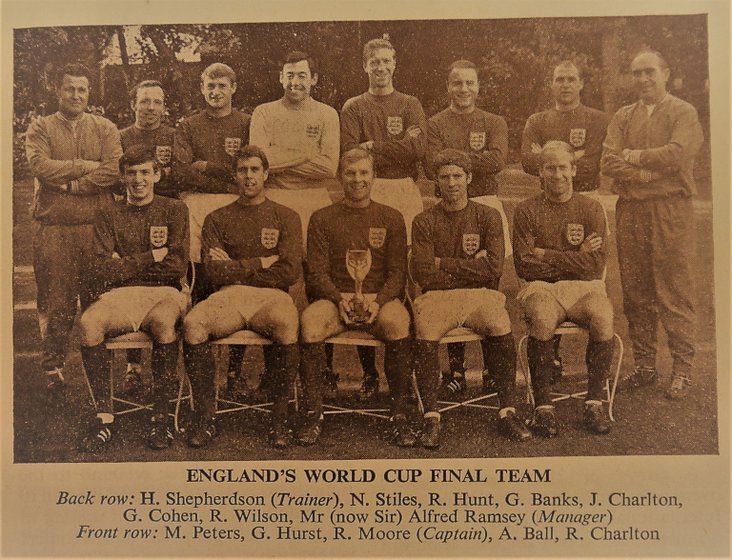 The Isthmian League was won, as you can see, by Sutton United, with Dulwich Hamlet propping up the rest. But many of our sides of today were spread out across different leagues. The Spartan League had Chalfont St Peter in seventh, five places above Staines Town, whilst Brentwood Town were third in the Metropolitan League, just behind Tottenham Hotspur and Arsenal but ahead of Bury Town, in fourth, and Cray Wanderers in ninth. The Greater London League somehow featured Chertsey Town and Canvey Island, whilst the Southern League had a number of our clubs. Romford were Southern League champions, Cambridge City having to settle for mid table two points behind their city neighbours, whilst the Southern League First Division had Margate as runners up, Hastings United in fourth, and honourable mentions for Ramsgate (Athletic), Ashford Town and Sittingbourne. Actually it wasn’t quite so honourable for the Brickies, they came last!

The Eastern Counties League featured Sudbury Town, Soham Town Rangers and Histon, whilst the Athenian League has a cluster of our clubs, with Bishop’s Stortford in second place, with Finchley (not yet merged with Wingate) close behind, as are Leatherhead,. Grays Athletic are further down the table, with Worthing just off the bottom. Hornchurch were Division One champions, with Hertford Town, Harlow Town, Carshalton Athletic, Tilbury, Cheshunt and Uxbridge following below.

Three of the four clubs in the FA Amateur Cup Semi-Finals were ours. Enfield defeated Walthamstow Avenue one-nil at Selhurst Park, whilst Hendon played at the Baseball Ground, St Andrews and The Hawthorns before finally falling to defeat against Skelmersdale United in a Second Replay, three-one after nil-nil and two-two draws. The Final also went to a replay after the original match at Wembley, in front of seventy thousand people, ended goalless. Enfield keeper Wolstenholme was the hero, saving a last-minute penalty to secure the draw, and in the Replay at Maine Road, Manchester, fifty five thousand people saw our club defeat Skelmersdale by three goals to one- Connell and Hill (2) scoring the goals.

The book then ends with a full day by day fixture list for the professional 1967-68 season, and an advert for the football Pools, promoted by Littlewoods, Vernons, Cope’s, Zetters, Empire and Soccer- the six established pools companies at that point. Who needed the National Lottery or Ray Winstone growling “Bet in play, naa?” 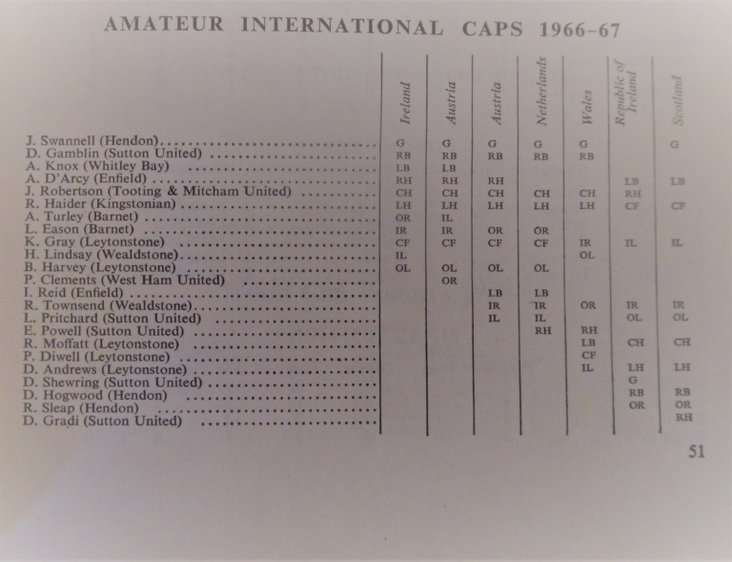 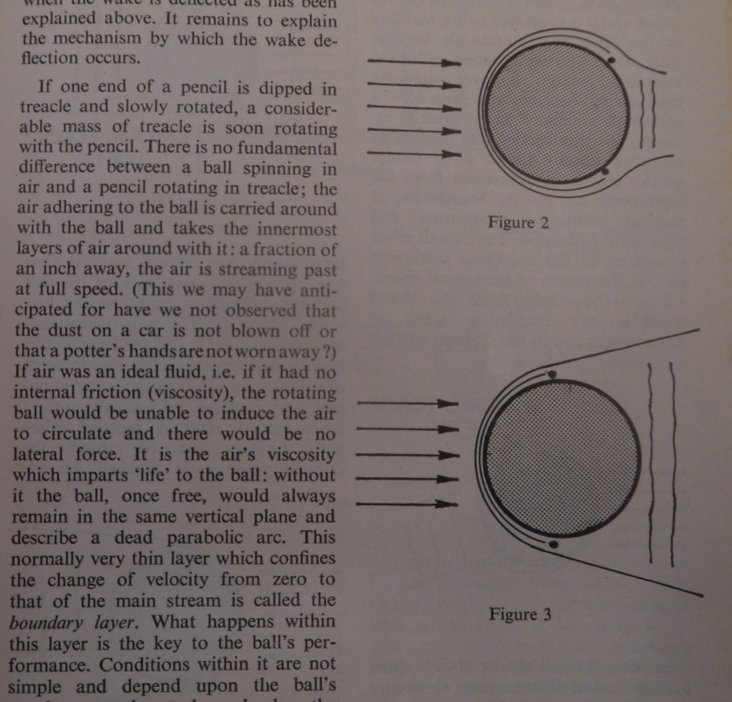 The flight of a football- treacle optional 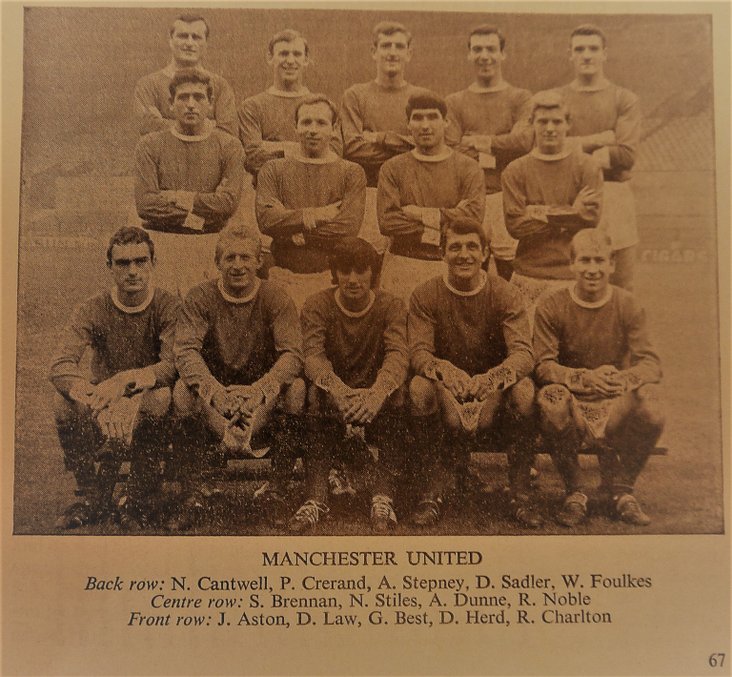 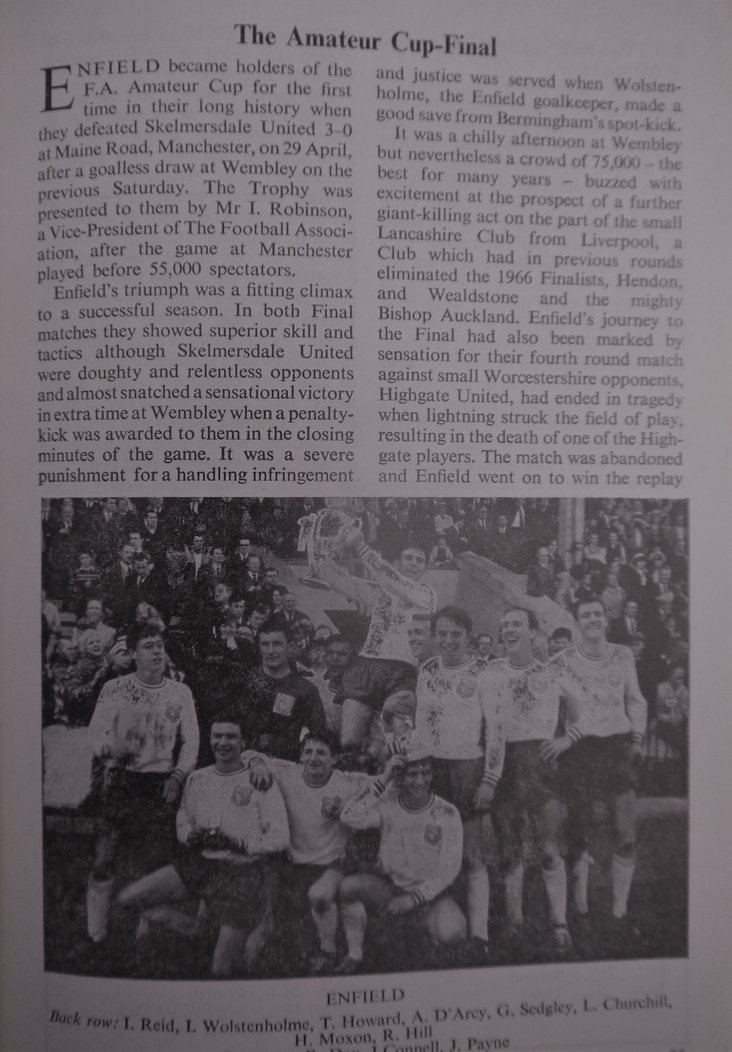 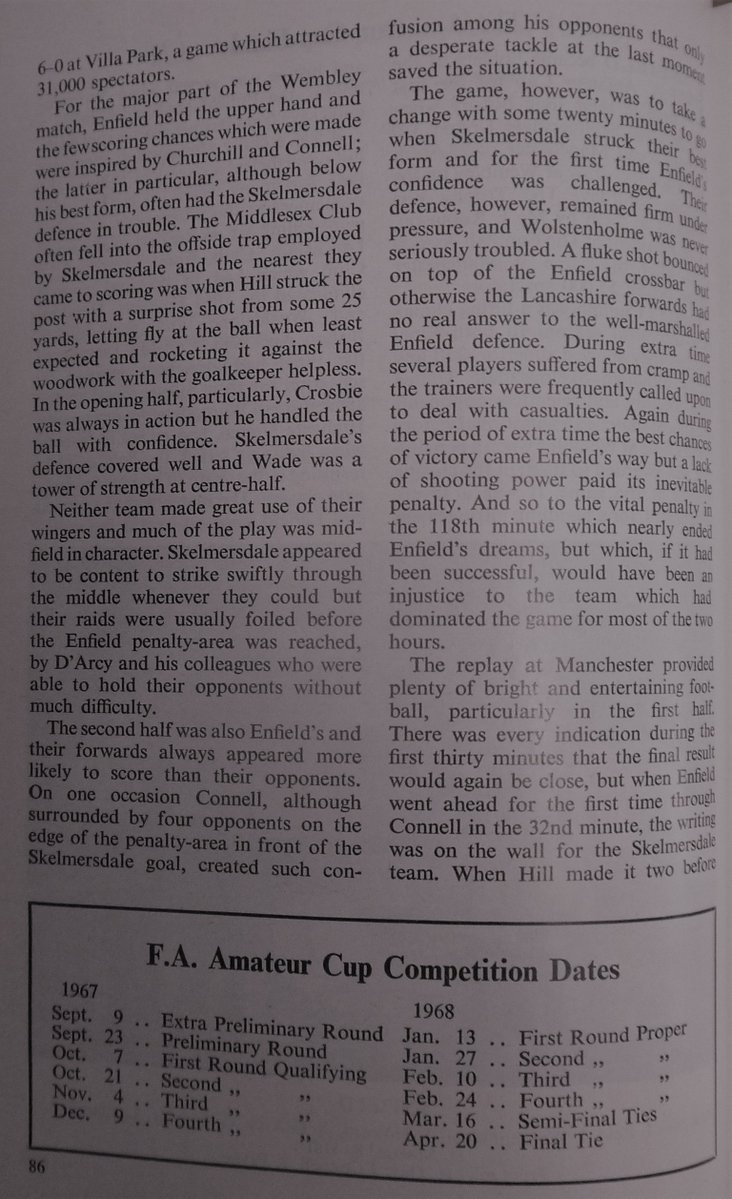 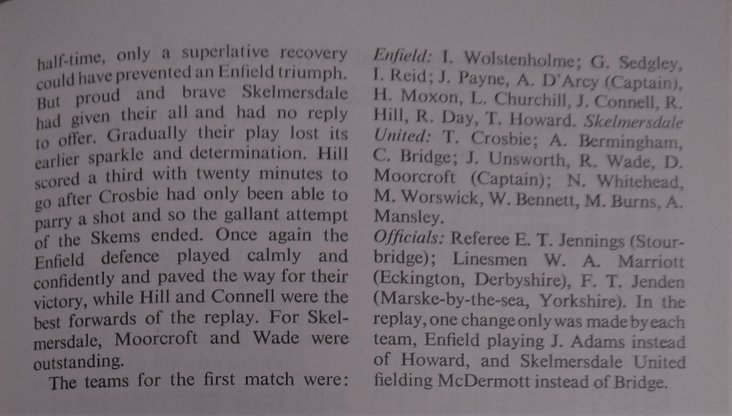 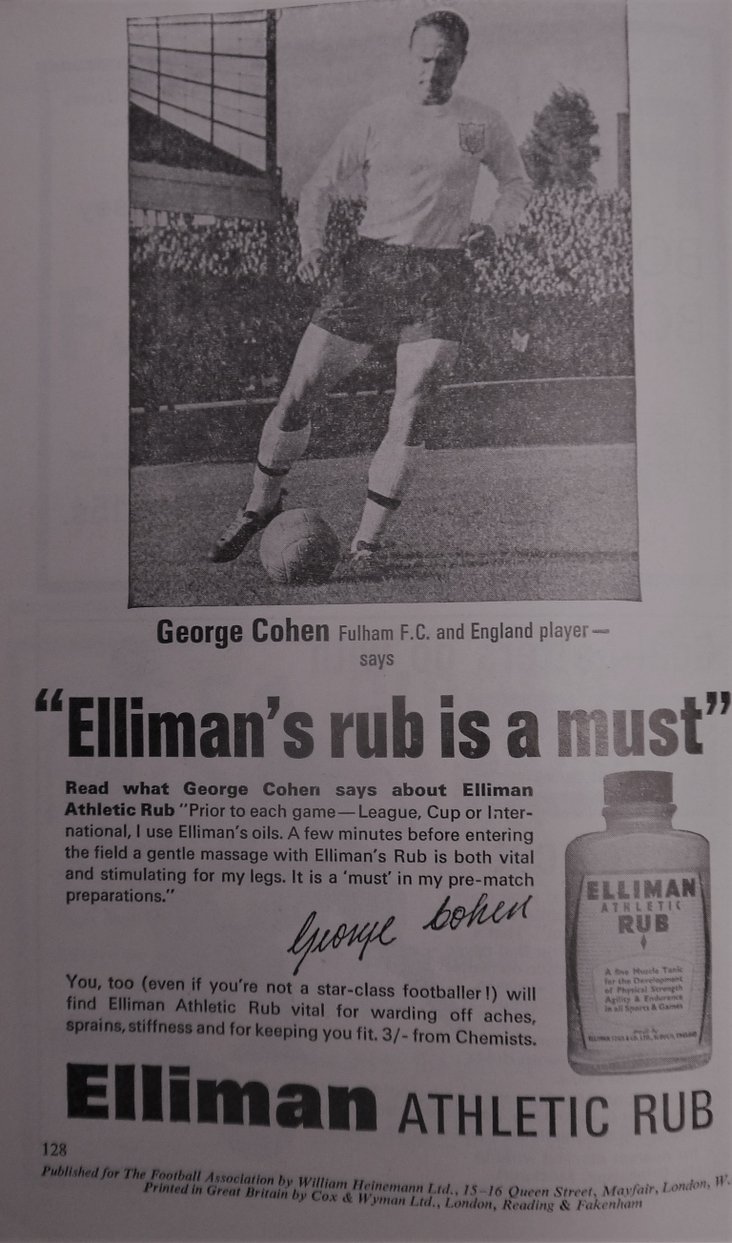 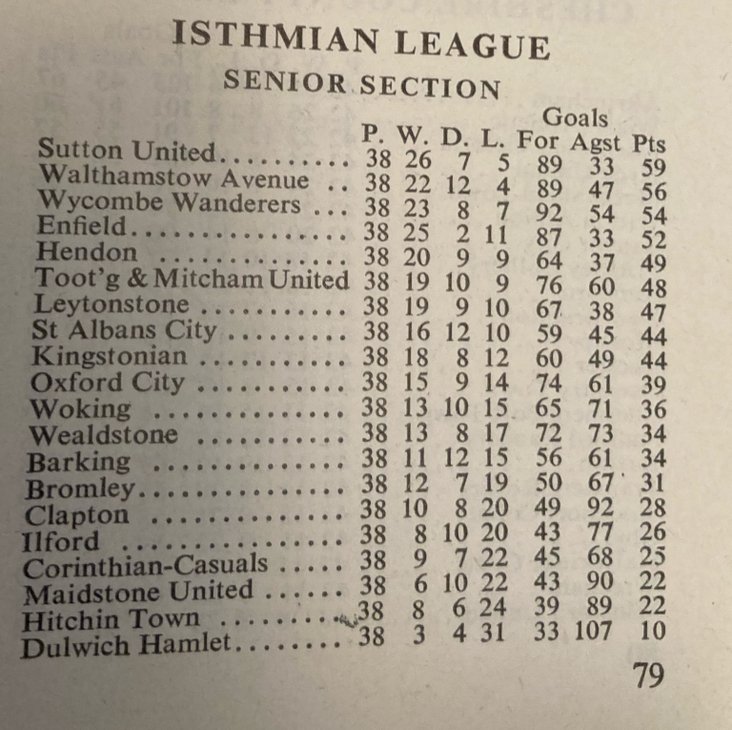 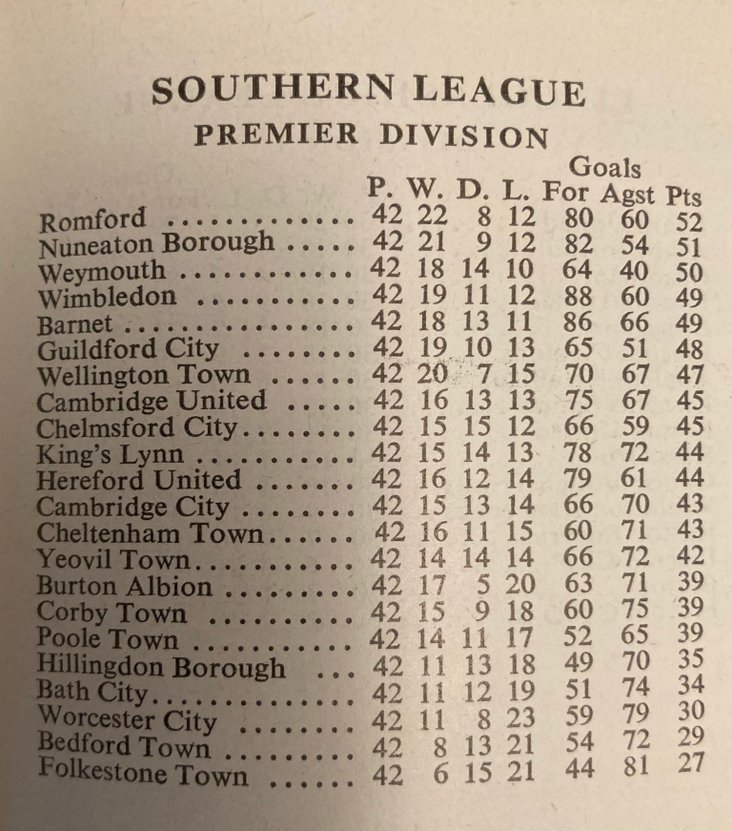 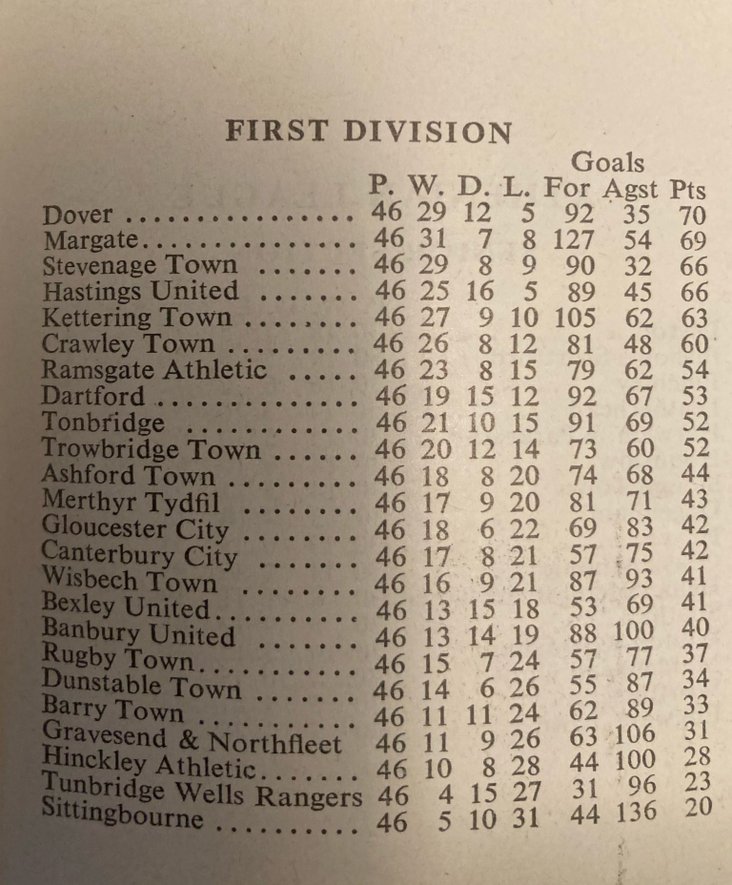 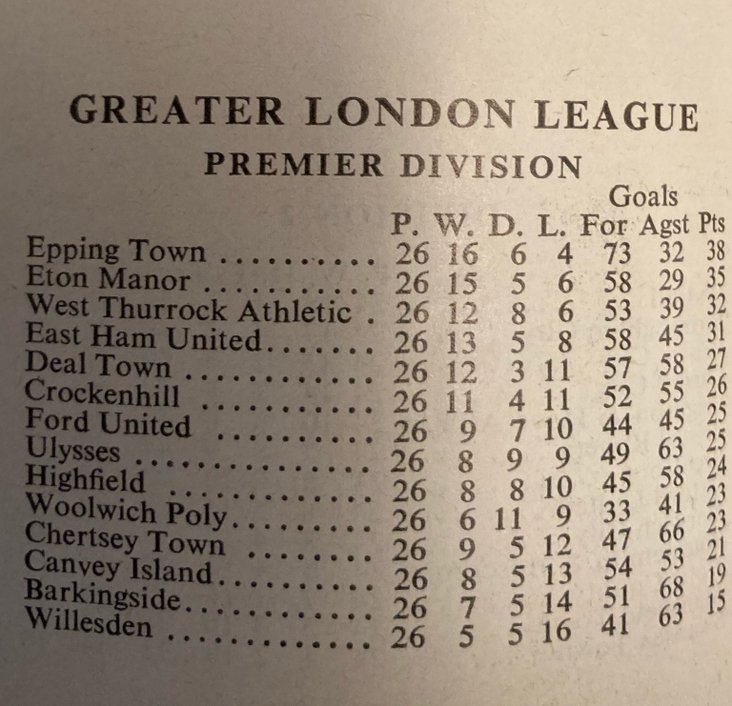 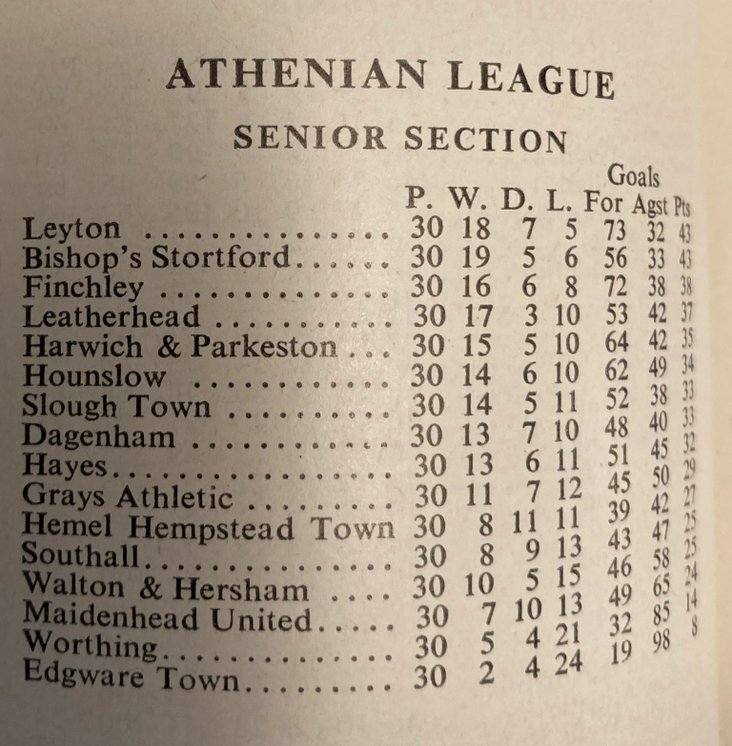 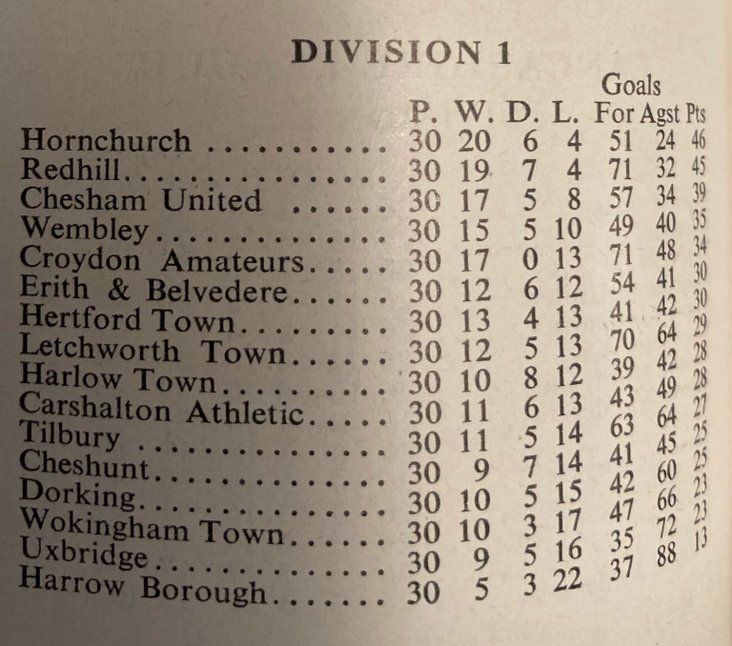 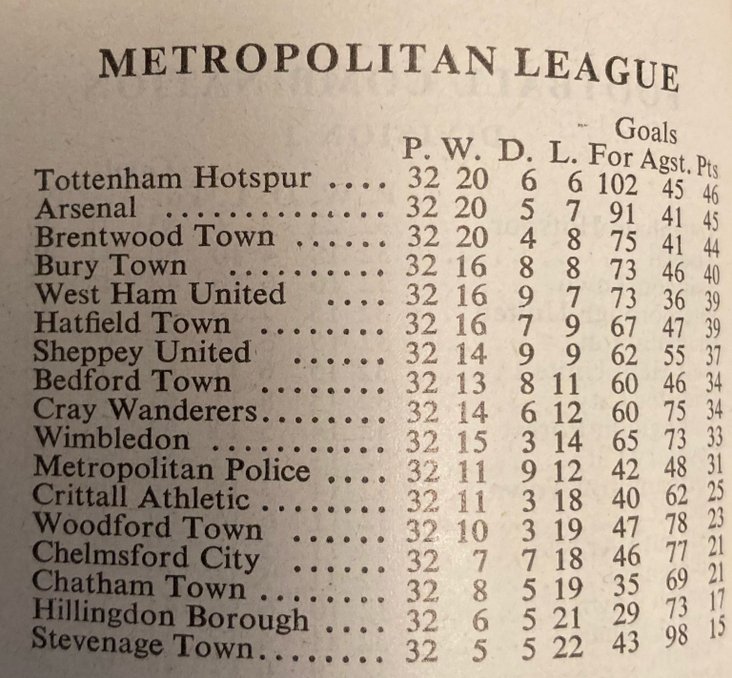 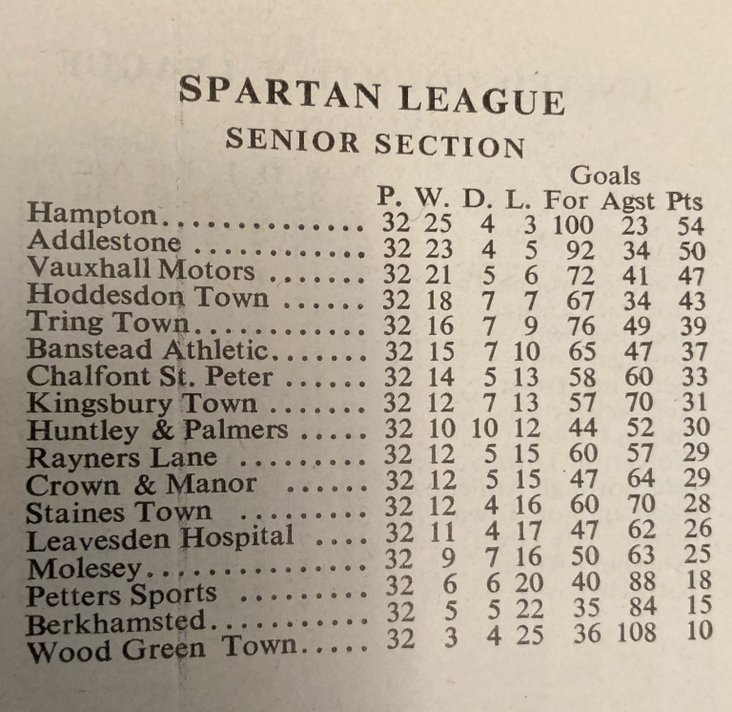