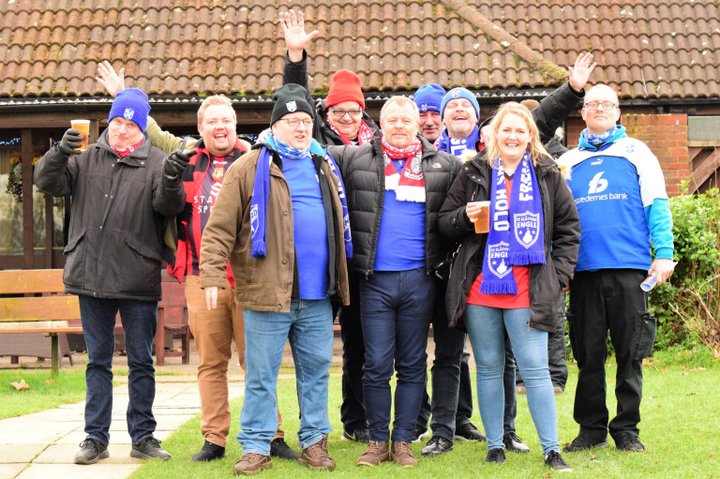 Sittingbourne are one of many clubs currently receiving financial assistance from their supporters- but almost a third of their donations have come from Denmark. We look into their unique friendship with Danish First Division side Fremad Amager.

Mark Chapman was born in South London and, like the rest of his family on his fathers side, became a fan of Charlton Athletic. When he was still small his parents decided they needed more space for their growing family and moved away from the capital, ending up in Kent, and, in a tale which will be familiar to many supporters of Isthmian League clubs, he and his father adopted their local Non-League side, Sittingbourne, as their second club. These days he is the Chairman of the Brickies Supporters Club- a role he carries out from a distance of seven hundred miles- and the instigator of a relationship which sees supporters of Copenhagen side Fremad Amager, who currently sit in sixth placed in the Danish First Division, actively following the fortunes of the Isthmian South East side.

Career and marriage took Mark to Denmark, via New Zealand, but he continued to follow the fortunes of the Addicks and the Brickies, watching both when he had the opportunity; but as he admits, not as often as he would have liked. Now settled with his family in Copenhagen- he’s lived in the Danish capital for fourteen years- and working for the British Embassy, soon after his arrival he began to watch his local side, Fremad Amager. The ‘Blue & White Angels’ are a professional outfit who include amongst their alumni the Danish international midfielder Soren Lerby, who started his career there before going on to win seven Dutch titles with Ajax and PSV Eindhoven, the European Cup with PSV, lift the Dutch Cup three times, and also win two Bundesliga titles with Bayern Munich; as well as former Ajax and Denmark midfielder Frank Arnesen, who Spurs and Chelsea fans might remember was their Director of Football in recent years. But he never lost his affection for the Brickies, and on a trip back to the UK just before Christmas 2017 he and his father went along to Woodstock Park to watch a match against Lewes. Defeat didn’t spoil their enjoyment.

“During the match I got talking to the Brickies chairman, Mo, (Maurice Dunk), and he was really interested in the football I was watching in Denmark, and we had a nice chat. Afterwards, when I was back home in Copenhagen, I wondered whether we could set up some kind of twinning arrangement, or fan friendship, between the Brickies and Amager. I mentioned it to Mo without acting on it at first, and then when I had some time on my hands a few months later- April 2018- I began talking about the idea with both sets of fans on social media, and to my surprise they were all for it, despite neither group having heard of the other club involved. I contacted Sittingbourne FC via board members John and Peter Pitts at Woodstock Park and in June of that year they joined me and two or three members of the Amager supporters club on a Conference call to discuss a way forward. Anyway not too long after that call one of the Sittingbourne fans, Mark Broad, drove all the way over to Copenhagen with a big bag of club merchandise in the back of his van, came to a Fremad Amager home game, and went round the home end handing it out- scarves, flags, all sorts of stuff. He made lots of new friends, quite a lot of beer was consumed, and not only was a great time had but new relationships were formed. One of those relationships was with Amager fan Rene Weiss, a larger-than-life character with a personality to match and a heart of gold, who was the head of the Amager Loyalists (a kind of ‘Ultras’ group) and who was particularly enthusiastic about the idea that the two clubs be informally joined together.” 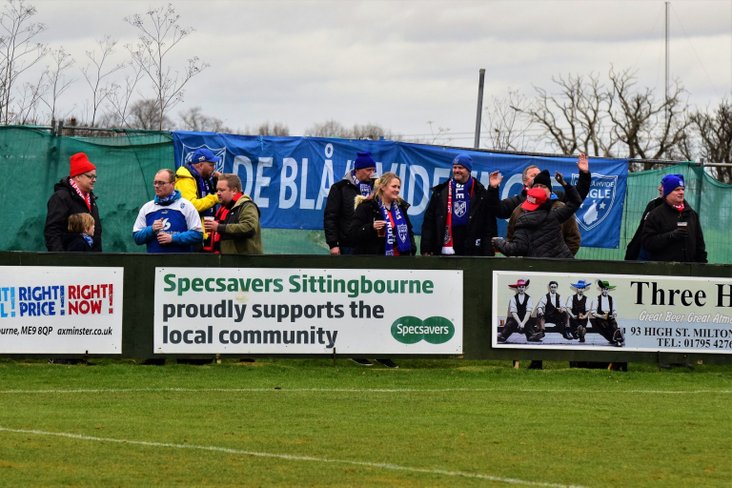 Red and Blue together

Sadly, tragedy struck. In November 2018, just as plans were being finalised for a get together, Rene committed suicide.

“Sittingbourne FC heard about Rene’s passing, and sent flowers to his funeral- a gesture which was enormously appreciated by the Danish fans and cemented the alliance still further. Supporters from both clubs joined each other’s Facebook Groups, and in February 2019 fourteen fans from Copenhagen made the trip over to England to watch the Brickies take on Haywards Heath Town. The club laid on a big reception for them on the Friday evening, Chairman Mo’s band (‘Marvellous Mo and the Back Line Ferrets’- no, we haven’t made that up!) played in the clubhouse, we remembered Rene, and we all had a fabulous time. In the hours before the match the travelling fans went to the pub, where they met the Mayor of Sittingbourne in full regalia and posed for pictures, and later the teams were led out by a young member of the travelling party- who presented the club with a signed shirt from Fremad Amager. After kick off we all shared Blakey’s Shed (the traditional- and rather noisy- home of the Brickies fans) and sang together. The story was picked up by the press both here in Copenhagen and back in Kent, and the trip was an enormous success.

Soon afterwards I launched the Sittingbourne FC Supporters Group on Facebook, and it now has nearly six hundred members from both sides of the North Sea.”

A twinning party was soon heading towards Copenhagen, too. A couple of months after Danish fans visited Kent a group of Brickies headed off on a European adventure to watch Amager’s final home game of the season. It was a crunch clash between two sides vying for promotion to the Danish Superliga, with the home side, in third place, hosting first place Silkeborg IF, former Danish Champions and former Cup winners. The match was a real classic on a beautiful sunny day, finishing four-three to the visitors and being played in front of more than four thousand supporters, and afterwards the Angels fans put aside their disappointment and looked after their English visitors superbly. They laid on a party with a live band, who had even learned the words to the Sittingbourne club song (“Brickies that’s our team,” not the rude tune they sing about Chatham Town!), lots of beer was shared, the Amager first team came in to say hello, and enduring friendships were formed. 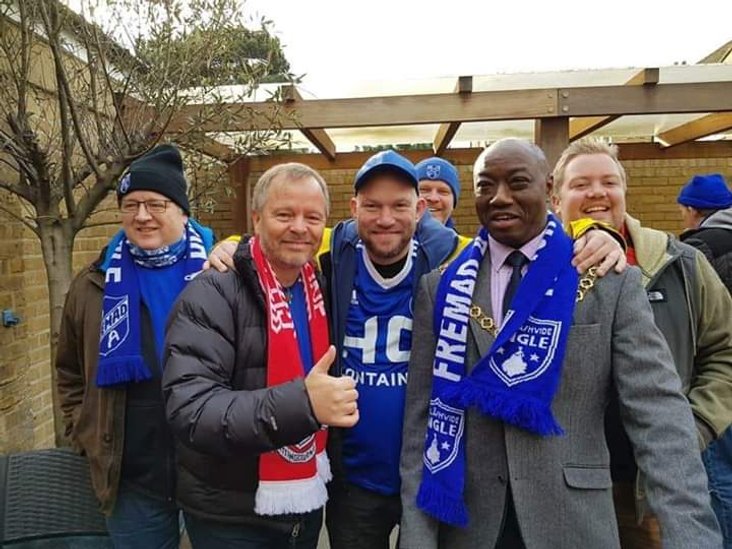 The Danish fans meet the Mayor

The strength of the relationship between the two clubs is really being demonstrated now, at a time when football- and particularly Non-League football- is facing an unprecedented threat due to the coronavirus. Sittingbourne have been one of many clubs to launch a crowdfunding appeal to help them stay afloat during the months- however many months it will be- without football, and they’ve had some rather unexpected help. Of the more than three thousand pounds donated so far, around three hundred and fifty pounds has come from the other side of the North Sea, as Fremad Amager supporters- and players- have put their hands in their pockets to help out their English football family. Mark has been really taken aback by this generosity. “That people in Amager who had never even heard of Sittingbourne two years ago should be involved in trying to keep the club afloat is both incredible and humbling. There’s not much left for me to achieve now, I’m confident that the relationships which have been formed will endure.”

More supporter visits are being planned, but of course have been put on hold for the time being. There have also been discussions about a friendly match between the two sides, and Mark is hopeful that this will happen at some point in the future- although expects that his adopted Danish team of full-time professionals would emerge victorious from any such encounter.

Whatever the differences between the UK and Europe at the moment, football is a common language for us all. The relationship between Sittingbourne and Fremad Amager perhaps demonstrates, if such a demonstration were required, that there is far more that unites us than divides us.

The late and much lamented Rene Weiss, in his Brickies regalia 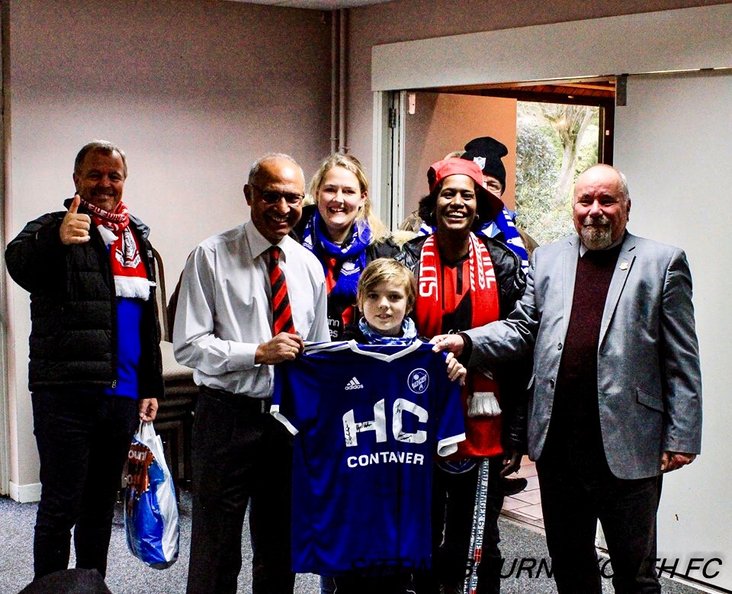 A Brickies welcome- and a signed shirt 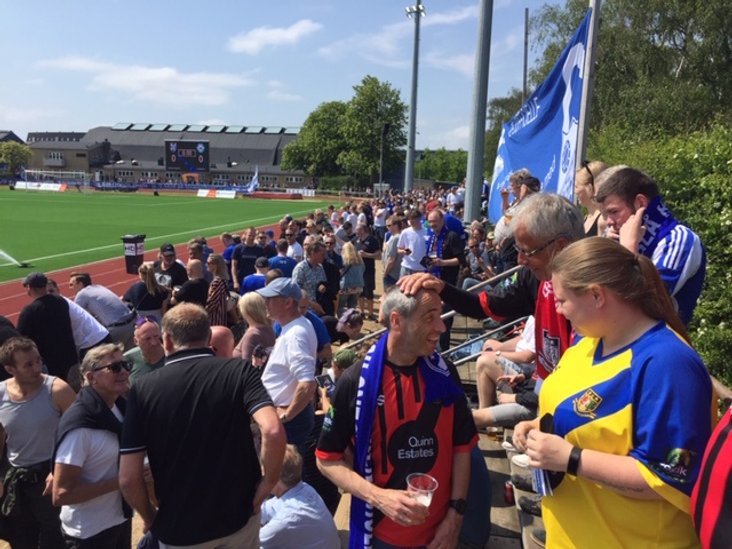 Football, beer and sunshine- what could be better?

Hillians ask fans for help  National Government gives with one hand...local Government takes away with the other