Back to winning ways for Bognor...whilst Uxbridge go third 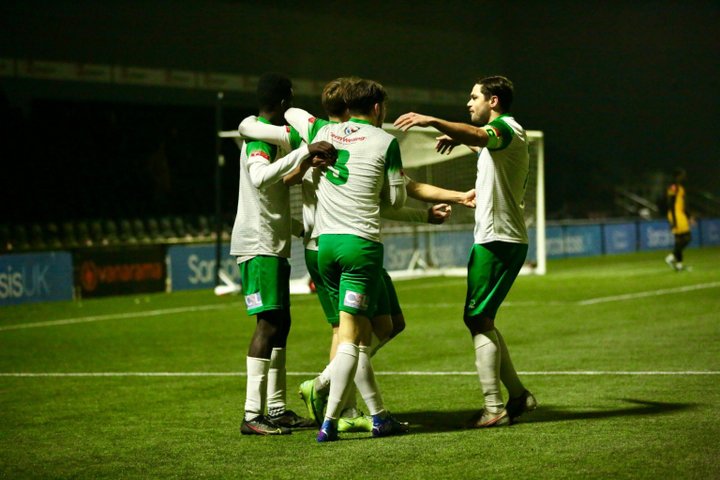 We had but two matches on a cold Wednesday night, and they delivered two away wins.

Bognor Regis Town arrived at Hayes Lane to face Cray Wanderers last night having picked up only two points from their previous fifteen, but got back to winning ways for the first time since November 20th by scoring the only goal of the game on a cold, cold night.

The Rocks faithful must have expected a positive outcome, albeit nervously. In the last seven meetings between the clubs going back to 2009, Wands had emerged triumphant but once, a two-nil win back in February 2013- yet despite that run, this has been a season where their side's most likely result is a draw, and you don't win promotion by picking up an average of 1.3 points per match.

Supporters of the home side must also have been similarly optimistic, given their positive start under the stewardship of Grant Basey with a win over East Thurrock United and a high-scoring draw against promotion-chasing Enfield Town, but in a match of few chances they saw their side undone on the hour mark when striker Dan Gifford, making his first start after a December loan move from Portsmouth, was set up to shoot by Ethan Robb and made no mistake. Amadou Tangara had a couple of fine saves to make for Bognor, but it was the faithful from the royal seaside who travelled home happy.

Onto the Pitching In Isthmian South Central now, and Uxbridge moved up to third with victory at Sutton Common Rovers. The Red Army from Honeycroft have had much to cheer about this season, with their side losing only one league game, and they were undoubted favourites going into this one- and they showed why, with a clinical performance which saw them score four goals without reply, two per half.

Mahlondo Martin opened the scoring on twenty one minutes, his twelfth of the campaign meaning he is averaging a goal every two games. That's exactly the same scoring rate he delivered during 2019-20, when he scored seventeen in thirty four, so he's continuing to show the kind of consistency that any cub would be delighted with.

Ryan Haugh doubled the visitors advantage nine minutes later, and after the break Anthony Mendy got into the act, rather unsurprisingly. That's twenty one in twenty five for the Uxbridge number ten, and unlike that other Uxbridge number ten, we're sure that Anthony was quite aware that he was at a party. Ezra Ndukuba wrapped things up with number four eleven minutes from time, and it was off for a post-match meal of wine and cheese for the visitors.

Uxbridge are fifteen points behind Bracknell Town, albeit with three games in hand, whilst Rovers ended the day as they started it, in fifteenth place.

We cordially invite you to two work-related parties this evening  It's Wednesday, and we've football! Well it looks like football, and there will definitely be people playing football, but who knows? Head along to Cray Wanderers or Sutton Common Rovers- no need to bring a bottle!