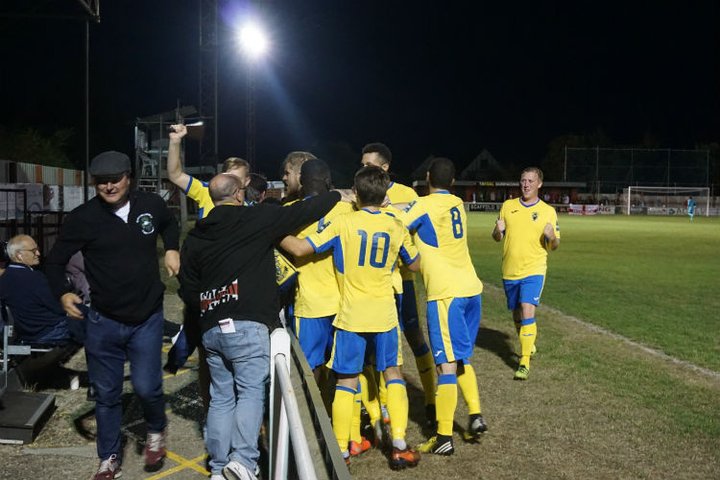 Louis Maughan headed to the seaside and watched Haringey Borough pick up their first ever Bostik Premier victory at Brightlingsea Regent.

“Let’s wait til the result is safe!” The verdict amongst Boro’s travelling fans to the question of when they should sing a riposte to the Premier Division prediction table produced on the league website. The annual survey, that asks a fan from each club to predict the final table, had Haringey in a disappointing 20th place and relegated back to the Bostik North.

It’s just a bit of fun, of course, an appetizer for all the Bostik League fans anxiously awaiting the start of the season. It finally kicked off this week and the North Londoners had already fired a warning shot across the bow of any would-be Nostradamus’. They were unlucky to only draw an opening day home fixture against Bognor Regis, who had of course been predicted as the division’s winners. 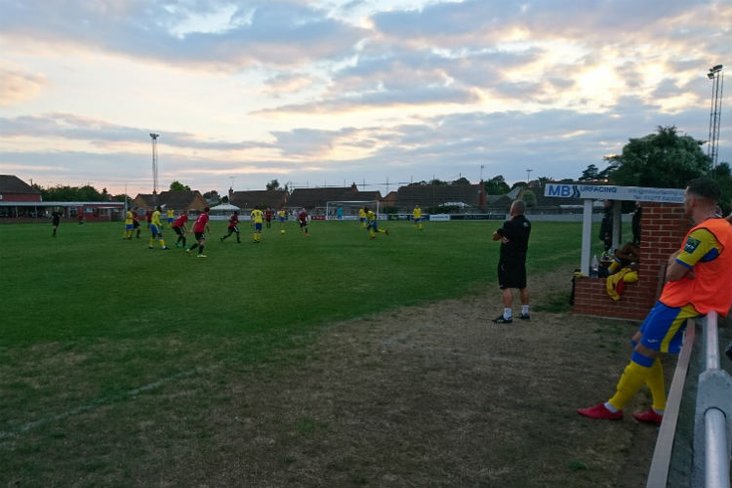 Boro’s second game and my first chance to see them this season was an away trip to Brightlingsea Regent. Coincidentally, Regent had come out of the prediction wash just one place above Haringey and they’d also turned the tables on one of the fancied sides on the opening day with a 3-2 away victory at Kingstonian.

A12 dread and sea air

Brightlingsea was unknown territory for me as previous midweek adventures had only taken me as far out of North East London as Bishop’s Stortford, Brentwood or Thurrock. It wasn’t until 5.30pm, after being assured I wasn’t required to help our 6-month-old suffering from her first ever case of the sniffles, that I fully committed to making the trip. Luckily, the journey was smooth and I was in Brightlingsea, breathing the fresh sea air by 7pm.

As is customary, I took the time before kick-off to research the team that calls The Taydal Stadium, my 84th ground, home. The R’s roots go back to Brightlingsea United who played in the Essex Senior League and then the Eastern Counties League. After a short period of decline in the new millennium, United merged with the youth team Regent Park Rovers to become Brightlingsea Regent in 2005. They returned to the Eastern Counties League and won several promotions that culminated in winning the Isthmian North Division in 2017. Last season was their first in the Premier Division and they finished 20th (one place below their predicted outcome for this season).

With some time to kill I was able to complete groundhop 101 with a burger from the snack bar, a scan of the programme and a wander around the pitch. 360 degree Facebook photos are the new obligatory corner flag shot for me, so I spent several minutes struggling to get one while Haringey’s Tosin Olufemi, warming up in front of me, looked on in bemusement. I did, however, manage to capture a pitch in good early season condition with a slight slope towards the clubhouse area. The slope may be slightly exaggerated in my wobbly camera work.

As the players appeared for the start of the game, and I made my way towards the travelling Boro fans I noticed a few faces in the Haringey squad. They’d added to their midfield options with the signings of former Leyton Orient youngster Charley Barker, who I saw play for Wingate & Finchley last season and Georgios Aresti, a Cypriot international. It was clear from the outset, however, that Boro hadn’t changed anything in their style of play. They were the same old solid, well-orgainsed unit with plenty of options going forward meaning they could go direct or try and pass their way through the opposition.

Early on they opted for the more direct approach. It worked well as they controlled the game and the attacking triumvirate of Mckenzie, Akinwande, and Nouble saw lots of the ball. Disaster struck, however, as Akinwande pulled up with suspected hamstring trouble after a quick dash down the left. He was promptly replaced and Haringey’s manager, Tom Loizou, lamented the risk of injury after a long journey to the game.

Akinwande’s replacement was crowd favourite (away crowd anyway) Michael Ademiluyi, who took up residence on the right-hand side. Brightlingsea began to find a foothold in the game following the injury with the dynamically, committed Mills leading the way and Hodd making some dangerous runs. The visitors began to find their stride again, however, and were putting together some more penetrative attacking moves together. Mckenzie and Nouble both had chances and the referee waved away appeals for a handball in the box.

Haringey soon had the lead. Nouble’s direct run into the box from the left was halted illegally by an R’s defender. Nouble stepped up to cooly finish from the spot to give Boro a deserved lead at the break. In the second half, the home side came out with considerably more intensity, a higher line and some increased support from the home faithful who now had something to get behind.

Brightlingsea produced some nervy moments for the visitors early on, but Haringey soon settled and, faced with a more attacking opponent, began to find a little more space in the midfield. Barker and Aresti were now much more influential. The away fans, now penned in between the corner flag and the seating area on the far side, had plenty to cheer for as Ademiluyi saw plenty of the ball down the right.

The tricky attacker twice cut into the box and fired curling shots towards the Brightlingsea goal. His first attempt proved to just be sighter as the second flew into the top corner. Queue jubilant scenes from the men in yellow as their first ever victory in the Bostik Premier Division was now all but settled.

Time to relax, celebrate, and meet and greet

Boro held out for a well-deserved win and settle the nerves a little for the season ahead. It was a typically authoritative performance that left the well-supported home side somewhat frustrated. Haringey can now pick up where Brightlingsea left off last season and show that promoted sides from the North Division will be no pushovers.

As Boro saw the game out the travelling away fans from the Bell End began to relax and enjoy the performance. There was even time for me to finally meet them all, and explain my plans to follow five non-league clubs over the course of the season. Hopefully, they managed to fix their cowbell!

I’ve now seen four of the five teams I’ll be following this season with just Grays Athletic to come this Saturday in what looks like being a very interesting game against Canvey Island, who lost out to Haringey in the play-off final last season. Haringey’s next game will be a trip down to Surrey to face Leatherhead while Brightlingsea move have another home game against Margate to look forward to at the weekend. The Premier Division is shaping up to be very competitive with plenty of teams looking to prove the predictions wrong.

You can read more from Louis at his fabulous blog, here.

 Travel Bosses try to make an island out of Sussex! Rail and road chaos for the entire season- and beyond!

Scholars go to the top of the class  Potters Bar hit the heights, Haringey Borough pick up their first ever win at Step 3, and Wanderers start their Meadowbank tenure with three points