Bostik Blog: Doughnuts on the way- and the football was sweet, too 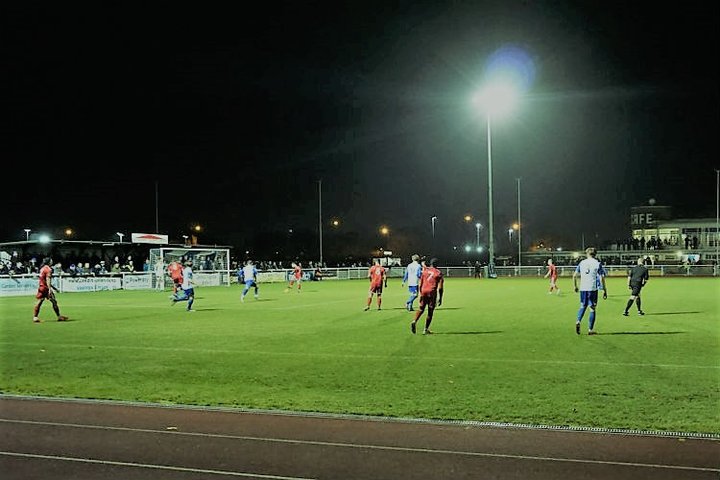 Blogger Louis Maughan visited Donkey Lane to watch Enfield Town take on Worthing. He got five goals- and probably an extra inch on his waistline.

There is a Krispy Kreme drive-thru on the A10 near Enfield, for anyone that doesn’t know. The road is also a good place to shop for a new car. For one night this week, however, it was also a battleground for the Bostik Premier Division. The promotions of Billericay and Dulwich Hamlet along with re-locations for Hendon and Leiston meant there was a bit of a vacuum at the top of the division, with only Folkestone Invicta remaining from last season’s top five. So far this season the upper echelons of the league have been largely filled by teams from the southern home counties. Enfield are currently the only side north of Croydon in the top seven.

The Towners were third in the table with just one defeat in their first 14 games. One place behind them, albeit with a couple of games in hand, were their opponents for the evening Worthing. Seeing these two sides near the top may cause raised eyebrows amongst some casual observers. They occupied the 16th and 17th places in the league when it closed out the 2017/18 season; Worthing being one point better off than Enfield.

Fans of both sides will tell you they saw this coming. Worthing started dreadfully last season. By the time they visited the Queen Elizabeth II Stadium in January, however, for the sides’ first meeting last season they were beginning to turn a corner. They won 1-0 that day and powered away from the relegation spots. Enfield struggled away from their home ground, picking up only four wins. At home, however, they showed flashes of what they could do with wins over Dulwich Hamlet and Hendon as well as a draw with eventual champions Billericay.

The two clubs’ performances on the pitch are also matched by numbers coming through the gates. Both sides are near the top of the attendance charts, which interestingly is very similar to the league table - it’s almost as if football is better with fans. There was a sense of excitement as I whizzed down Donkey Lane and it wasn’t just because the parking is free. Enfield are currently the top scorers in the division. This is thanks, in no small part, to the arrival of Billy Bricknell who joined the club from Billericay in the summer. The famed goalscorer already had eight for the season.

Worthing didn’t have quite the same level of big name signing but they could boast a selection of returning players. Zack Newton and Reece Meekums both returned to the club on loan from Welling United and Bromley respectively, while Jess Starkey had changed his mind about leaving the club in the last few weeks. The Rebels had won all three of their games in November against Chesham and Uckfield in cup competitions and Folkestone Invicta in the league. Just like Enfield, they’d only lost one game in the league so far. Coincidentally, both of their solitary losses were against Margate.

The Towners, on the other hand, were experiencing a little bit of a slump and hadn’t won a game yet this month. They’d lost cup games to Hayes & Yeading and Basingstoke Town as well as a league draw with Haringey Borough. It can be hard to gauge form from the variety of cup competitions that are taking place at this point of the season, but for many gathered in Enfield’s art deco clubhouse or around the long jump pit it appeared that Worthing might be slight favourites.

The chosen home end of the ground for the first half filled up with eager Towners long before kick-off. Fortunately, they didn’t have to change ends as the toss was decided. A group of Worthing fans vacated the bar, seemingly with a flag each, and headed to the opposite end. A drumbeat at the home end, while the visitors retorted, ‘We are Worthing, we don’t need a drum.’ The good-natured exchange between the two ends and the goalkeepers in front of them continued throughout the game.

Both sides looked comfortable in possession in the early exchanges. Enfield looked patient while Worthing had a bit more pace going forward. David Ajiboye, in particular, for the visitors glided across the surface prompting the odd gasp from onlookers seeing him for the first time. The winger had scored two goals in his last two games and a couple of early runs put the home side on notice.

Enfield began to edge the possession and territory as the half wore on. At times they had Worthing pinned in their own box with series after series of dangerous corners and long throw-ins. The home side were just unable to find the finishing touch or the space to fire in a shot. The game became attritional as both sides made few mistakes. Eventually, it was an injection of speed from Ajiboye that sparked the game into life. He burst down the right, into the Enfield box, and pulled the ball back for Starkey who tucked it into the bottom corner.

Worthing went into the break with the lead, but Enfield had plenty to be encouraged about. The key moment of the game came a few minutes into the second half. A good move from Worthing led to a shot on goal. The ball beat the keeper but couldn’t get past Sam Hatton who produced a pretty good impression of a keeper. The nearby Worthing fans were keen to remind the referee of the rules. After composing himself he gave Hatton his marching orders. Joe Wright, Enfield’s actual goalkeeper, then brilliantly saved Ajiboye’s penalty. It appeared to be a step in the right direction for the home side but they were now at the mercy of Worthing’s speedy attack with a man down.

They were soon made to pay as Ajiboye made up for his spot kick miss, danced around several defenders and finished well to make it 2-0. Just like some kits from a distance, it looked like curtains. Enfield stuck at it though and again thought they’d got back in the game. Bricknell was pulled back as he powered into the box. He made no mistake with his penalty. Worthing, however, soon delivered the final fatal blows. Another good run from Ajiboye created enough space for Newton to finish for the third. A few minutes later Ajiboye added his second, and Worthing’s fourth, to round off a great evening for the former Brighton youth player.

Worthing move above Enfield in the table. They still have a couple games in hand over the rest of the sides at the top and could well see themselves at the Bostik Premier Division summit in the near future. Enfield were finished off by a clinical side but showed more than enough to prove they’re worthy of being considered contenders, especially with a proven goalscorer in their ranks.

Read more from Louis at his marvellous blog, here.