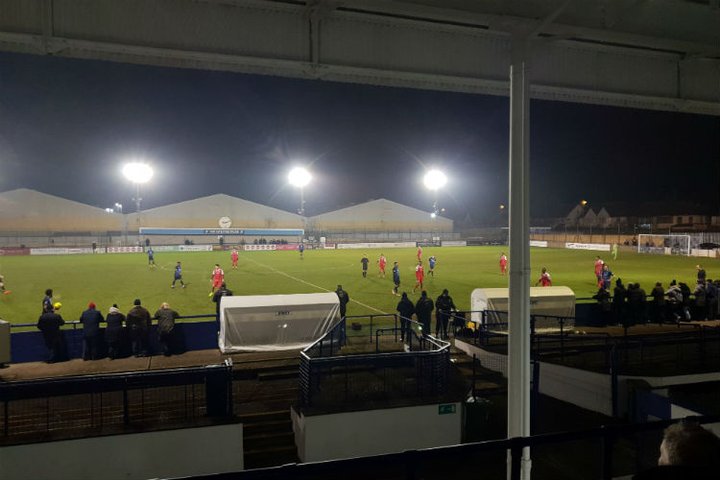 The first thing that comes to mind when you think of Wingate & Finchley is probably their stunning art-deco main stand or maybe their distinctive two-toned kit and club badge. They may be better known for their aesthetics but they’ve also become a model of consistency. They’re now into their eighth successive season at step three despite their two constituent parts only becoming one in the early 90s.

They looked as though they may be on the cusp of a move even higher. Under the stewardship of Keith Rowland, the Blues finished ninth last season and fifth a year earlier - their two highest league finishes. The fifth-placed finish saw them make the promotion playoffs where they lost out to Bognor Regis Town in the semi-final.

Unfortunately, Rowland left the club at the start of October citing that he’d taken them as far as he could. In came former Reading pair Glen Little and Nicky Shorey to much excitement amongst the Blues’ loyal fans. Perhaps the Premier duo could push them on that little bit further. The partnership lasted just under a month as Shorey then stepped down due to other commitments.

Events on the pitch had been equally eventful for the North London club as their league campaign had so far been a bit of a struggle. They’d won six, drawn three and lost nine of their games so far. The silver lining of the season had been the Blues’ run in the FA Trophy. They won away at Tiverton Town of the Southern Premier South and then sensationally beat Chippenham Town of the National League South in a home replay.

Don’t park in the rugby club

‘Oh no, don’t park there. They’ll lock you in”, said the helpful man on the gate of the Maurice Rebak Stadium. He was referring to the car park at the adjoining rugby club. It seemed to be too good to be true at the time, so I hastily retreated to one of the nearby residential roads. My return to the turnstile was more successful. I was welcomed in by a couple of the youth players manning the entrance - I’m surprised more clubs don’t use their young players in this way.

Finchley is quite a leafy well-to-do suburb that you might expect to favour the oval-balled game rather than football. The Blues, despite this, have the usual hardcore quorum of fans that accompany each step three club. They also have the now obligatory ‘ultra’ group behind the goals as well as small groups of youth players galivanting in the spaces between the main stand and the pitch, when they’re not helping out on the turnstile.

The crowd for the evening was fairly low, perhaps down to the cold or perhaps because the local Premier League outfit were playing a vital Champions League game against Barcelona, or maybe a mix of both. The attendance was swelled slightly by a few fans from Harlow who looked more than cold. I was in Harlow for a game last week and it was just as chilly there. Perhaps this time they’d seen something frightening on the journey, or mistakenly stopped off at the eerily named local attraction ‘Clown Town’. Have a look at your trusted online map provider, you can’t miss it.

Harlow take points back to Essex

Wingate & Finchley were in 17th place prior to kick-off, six points ahead of Harlow who were one place off the bottom. The Blues had won two, lost two and drawn one of their last five league games. They’d also overcome Chippenham during this run and knocked Bowers & Pitsea out of the Velocity Trophy on penalties. They scored seven goals in the three games it had taken to progress in the two cups, coincidentally the same amount they managed in all of their nine home league games so far this season.

It was a worrying trend, especially as Harlow had already managed more than double that amount on their league travels. The Hawks from ‘next to Poundland’ had lost to Enfield and drawn with Bognor in their last two outings but had beaten a Tonbridge Angels side featuring their former star striker Alex Read, as well as Potters Bar, in the two games before that. They are somewhat of an anomaly to me as they look great whenever I see them yet always seem to be around the relegation positions.
The home side started the game well and zipped the ball around quickly. Harlow looked a little more circumspect but soon got into the game. As Harlow began to settle the Blues found it harder to keep hold of the ball. The visitors began to edge the possession stakes. Former Cheshunt player Koranteng had the first clear chance of the game but he couldn’t beat Gore in goal for Wingate & Finchley.

It wasn’t long, however, before Harlow were ahead. Louis Yuill got on the end of a loose ball and unleashed a volley so powerful that Gore had no chance, despite him being able to see it coming from a good 25 yards. Harlow then had the home side under the cosh for the next few minutes.

The visitors doubled their lead. Aqcuah timed his run to perfection and got on the end of a cross from Koranteng to finish with ease. The Blues tried to recover. Mitchell, on loan from Wealdstone, had some bright moments down the right-hand side while Laney and Putman worked tirelessly up front.
Glen Little made changes during the second half but the home side just couldn’t get back into the game. Putman had the best chance as he raced clear of the Harlow defence only to see his shot rebound off the inside of the post and role agonisingly along the goal line. The Blues had a couple of chances on the break but didn’t have quite enough pace to take advantage of them, Harlow, on the other hand, had pace and strength up front with Aqcuah holding the ball up well while other players ran in behind.

There was an air of disappointment around the ground as the whistle went. The Blues next game is at home to Dulwich Hamlet. They’ll hope that prospect caused them to take their eye off the ball temporarily. Harlow, on the other hand, move up one place. They’re now within three points of the four sides currently above them.

A group which includes Wingate & Finchley.

Read more from Louis by visiting his marvellous website, which you'll find here.

Rooks hit five- and the summit  We had one game last night. And what a game it was for the hosts.