Bostik Blog: The first of my Grays Days 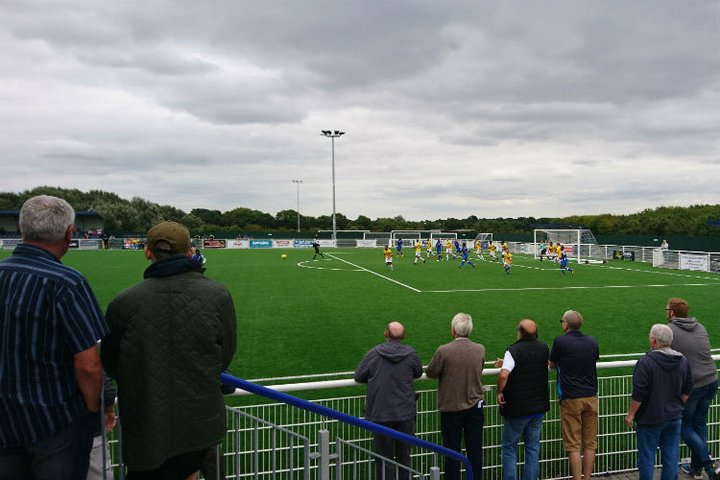 Bostik Blogger Louis Maughan has decided to focus his attentions on a small number of clubs this season, and from Bostik North he has chosen Grays Athletic. Here's his first competitive Athletic experience of the campaign.

Picking a team to follow this season at step four was pretty difficult. The chosen club was, of course, going to come from my favourite league, the one I saw the most last season, the Bostik North. It’s a division filled with options. After a summer of reminiscing about the many clubs I visited last season, I went for Grays Athletic. I saw Grays defeat Bury Town 3-1 early in the year and was impressed by the football they played.

It wasn't just the performance on the pitch, however, that attracted me to following the club. They finished comfortably in mid-table last season despite fleeting glimpses of a side that could challenge the promotion places. Collective wisdom suggested this term could see a similar outcome. It is the off-field story that really appeals about Grays. They are a community owned club that's currently homeless. Negotiations have begun with Thurrock Council to enable them to return to their hometown and I was keen to witness this journey for myself. 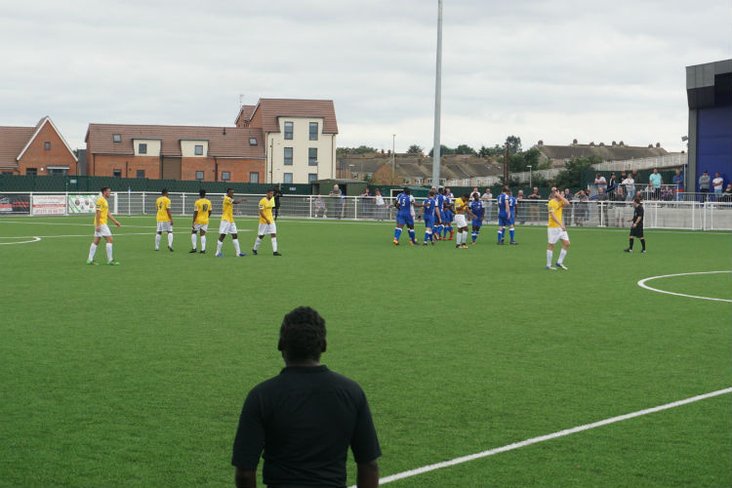 Grays celebrate- and the linesman gets in the way!

I managed to see Grays play twice during pre-season. Unfortunately for them, both of the games I saw were 4-0 defeats. The first was at the hands of a very good Cray Wanderers side that had already mastered the art of clinical finishing before a competitive ball had even been kicked. Some Grays players on the sidelines were clearly anxious. The experienced heads settled them down and regaled them with stories of seasons past where they’d played for teams that had lost every warm-up game but ended the season with promotion.

The second game I saw was a slightly more worrying loss to Walthamstow from the Essex Senior League. My local side has improved a lot over the summer, but the frustrated faces in blue now displayed genuine signs of worry for the season ahead. A couple of positive results follow this game, however, including a win over local rivals Tilbury, but the feeling on social media (always a reliable gauge of reality) was that the season could be a bit of a slog.

Summer recruitment continued apace with regular club updates on players that were moving on or moving in. Many key players, however, were retained. The big loss was that of prolific striker Kieran Bishop. Replacing him would be vitally important. This was officially achieved a week before the season started when the club announced the signing of former Dagenham & Redbridge forward Shomari Barnwell. Things were finally starting to look a little more positive.

The positivity continued all the way to Witham, for Grays' first game of the season. Goals from Barnwell and Hahn gave the Blues a 2-0 away victory to kick-start the season. Next up was their first home game of the season. A tough looking contest with one of the league's promotion favourites, Canvey Island.

The Islanders made it all the way to the play-off final last season, had kept hold of a lot of their attacking talent and were hotly tipped to push for promotion. It would be a tough test for Grays and a pin that could potentially prick the early season enthusiasm. Canvey won both games between the sides last season by a three-goal margin. A 3-0 win on the Island and a 6-3 victory at Parkside. The yellow peril were described as Grays' bogey team by some in Thurrock.

There was a hopeful feeling around Parkside as we arrived. My dad was very impressed, as most people are, on his first visit. The only people in the ground that weren't adorned with an eager smile were a couple of young lads on bikes who'd sneaked in through an open gate and were soon told to, erm, 'get on ya bikes' and head round to the turnstiles. Prior to kick-off, the club paid its respects to lifelong supporter and servant of the club, Peter Symons, who sadly passed away during the week. Tributes were made by players and fans alike during a minute’s applause.

Both sides appeared to almost be at full strength. Grays regular Joao Carlos returned to the bench after missing the Witham game through injury. Manager Jamie Stuart mentioned in his programme notes that the squad had worked hard on their 4-5-1 formation prior to the season beginning. The preparation was paying dividends as the home side had the best of the early exchanges.

An intriguing battle emerged in the attacking areas as both team’s chief creator was a compact number eight. Adeyinka Cole and Mitchel Gilby were both at the hub of their side's attacking threat and both had opportunities to give their side the lead. Gilby's vicious dipping shot from outside the box, the visitors best chance of the first half, just cleared the crossbar. Cole then found himself one-on-one with the Canvey goalkeeper, but Palmer was his match and kept the scores level.

Barnwell won every aerial challenge for the Blues and they spent the majority of the game on the front foot. Palmer made another great save, this time from Gordon following his driving run into the box. Grays' performance was soon rewarded, however, thanks to a terrific Hahn solo effort. The midfielder quickly got a loose ball under control outside the box and unleashed a spectacular drive into the top corner. The Blues went into the break with the lead.

The lead only lasted until 10 minutes into the second half. A Gilby corner was headed home by Merrifield. Grays continued to play well despite the setback. Cole, Adeniji, and Barnwell all had opportunities in the second half, but couldn't supply the finishing touch. Canvey looked dangerous on the break but ultimately struggled to get their attacking players into the right areas.

Grays may well have taken a 1-1 draw with a strong Canvey side before kick-off, but they will see it as two points dropped considering how well they played. A return of four points, however, from their first two games and two good performances may see some Blues fans re-adjust their expectations for the season ahead.

Read more from Louis at his own website, here.

Wands work their magic, whilst Town triumph  Cray and Faversham pick up the points in our Sunday fixtures