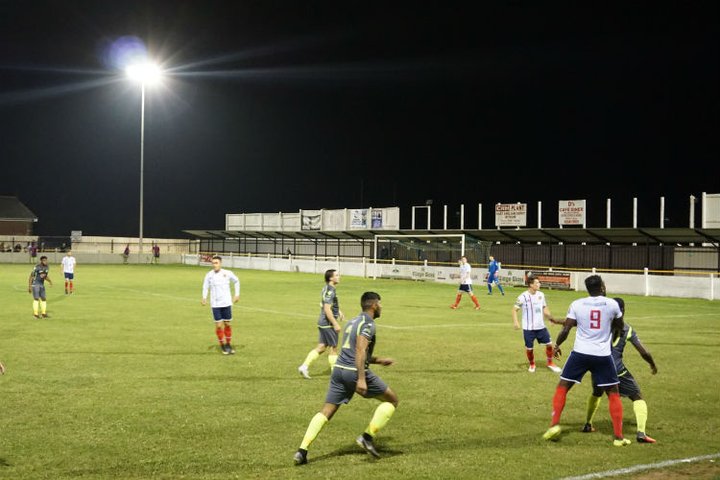 Bostik Blogger Louis Maughan heads to Spa Road, dodges security, and sees eight goals. Sadly they were all from the spot!

Cup fever has well and truly taken over non-league football in the past few weeks. I was now heading to my third different cup competition in six days. The hat-trick would be completed by my first ever Velocity Trophy game, my first Grays Athletic away trip, and my first visit to Witham Town. With so much new ground to cover it didn’t even register that it could also be my first 0-0 of the season.

Things had changed a bit for Grays since I saw them outplay Canvey Island a few weeks ago but- rather unfortunately- end up with just a point. Following that draw, they’d been knocked out of the FA Cup at the hands of FC Romania and been beaten comfortably twice in the League by Aveley and Maldon & Tiptree. The pre-match conditions at Witham seemed to sum this up perfectly as a menacing dark cloud formed over the end where the Blues warmed up.

The Velocity Trophy, also known as the Alan Turvey Trophy, and formally the Isthmian League Cup dates back to 1974. Grays are former champions of the competition having beaten Enfield 3-1 in 1992. They’ve also been in the final as recently as 2015. It was the perfect distraction from their recent run of league losses. It also gave Witham the chance to play someone other than Coggeshall Town. They have played half of their games so far this season against their local rivals. They will meet, at least, two more times before the end of the season.

The Town are also fairly familiar with their Thurrock opponents, as the two sides met in the opening league fixture of the season. Grays ran out 2-0 winners that day thanks to goals from Shomari Barnwell and Mitchel Hahn. Things looked a lot brighter for the Blues back then. Hopefully, a return trip to Witham would help take the wind out from behind the nimbostratus clouds above and back into their sails.

As I pulled into Witham’s Spa Road home I thought I might be in for a little bit of local ‘argy-bargy’ as the car park appeared to be full of security. It turned out to be eager members of the local Witham running club meeting for an evening jog. Their high-vis attire indicated they also didn’t trust the dark clouds appearing on the horizon.

After realising I wasn’t going to be frisked - sad face - I headed for the turnstile. Spa Road is situated in a green, open area of the town, but the pitch is fully enclosed by corrugated iron. The contrast between the ground and its surroundings gives it a fortress-like feel. The Blues squad, who’d already sacked this particular stronghold once this season, warmed up as I unsuccessfully tried to get a 360-degree photo.

Witham moved into the ground in the 70’s and it’s clearly a step up from their original home which is described in the club history section as being a cow pasture with a barn for changing rooms. There was nothing bovine to spot on the pitch before this game, but I can’t comment on the changing facilities. The Town can trace their history back to the 1800s, but they began playing senior football in 1971. They were founding members and inaugural winners of the Essex Senior League; a fact I’ll definitely be showing off at my next ESL game.

Following some good times in the ESL, Witham applied and were accepted into the Isthmian League in 1987. By 2006 they were in the newly formed Division One North. A brief spell back in the ESL followed, they picked up their third league title and then returned to the Isthmian League. In 2014 they won promotion for their first and only season in the Premier Division by defeating Needham Market and then Harlow Town in the playoffs.

Both sides had a bit of a break going into the game having been knocked out of the FA Cup. The Witham Town manager Mark Ashford promised, before the game, to give a couple of younger players a game as well as getting some minutes into the legs of a few squad players. Jamie Stuart also made a couple of changes for Grays. The starting team had a strong frontline and all the hallmarks of a side put out to progress to the next round. A short trip to Maldon & Tiptree would await the winners.

The Blues started the game on the front foot and were camped in the Witham half for large parts of the first half. Witham occasionally looked sprightly on the break but the Grays back four were able to snuff out any openings they had. Barnwell, Gordon, and Adeniji all looked lively in the final third but the visitors took a while before they created anything of note. Adeniji forced Collins into a save and a few minutes later Barnwell got behind the Witham defence only to see his effort from an acute angle come back off the post.

The second half started as the first finished; Grays were still finding it hard to break down the stubborn Witham back four. As frustration grew the Town began to get into the game. They were now finding it easier to move the ball upfield and created some chances of their own. Sam Ashford had the best as he danced into the box and angled a shot towards the bottom corner. Fortunately for Grays, it just rolled past the post.

A Witham player received treatment for a bang to the face towards the end of the game. Farcical scenes ensued as the referee refused to let him re-enter the field of play without a thorough inspection. He was forced to change his shirt and was eventually allowed to resume. The game tightened up as no-one wanted to be the guy whose mistake cost his side the game. The die was cast and it finished scoreless. There was a small, but audible, sigh of relief as the announcer confirmed the game would go straight to penalties.

The sigh of relief soon became one of annoyance as the quieter end of the ground was chosen to host the shootout. Quieter is, however, a relative term. Although there were significantly fewer people at that end Witham’s celebrity fan James Beardwell was there to make up for the shortfall in bodies. Witham went first and the shootout showcased an uncharacteristic level of quality compared to the 90 minutes that had preceded it. Only one player missed and Grays’ Barry Cogan was the unlucky individual who will soon be appearing in a pizza advert.

Witham triumphed much to the delight of the home crowd and their superstar fan. They earned a trip to Maldon & Tiptree in the next round. Grays, on the other hand, have a tricky league visit to Brentwood on Saturday. The very competitive North Division can be an unforgiving place when you’re slightly off form.

Read much, much more from Louis by visiting his blog, here.