In an interview with millennial media maestros Vice in 2014, FC Romania’s Chairman Ionuţ Vintilă mentioned that he believed that ‘within three or four years’ the club could be playing at the 7th level of English Football. Nearly five years later it turns out he wasn’t that far wrong. In early summer last year it was confirmed that FC Romania would join the Bostik League. The way their promotion was finally sealed, however, would have been far tougher to predict.

The club finished third in the Essex Senior League last season, one point behind Basildon United and three behind Great Wakering Rovers. The two Essex clubs were promoted automatically following a closely contested promotion battle. It looked like the Wolves would face at least one more year at step five. Some good news, however, came from Barnsley of all places. A club called Shaw Lane folded. The subsequent readjustments filtered all the way down to Hertfordshire and FC Romania were named in the brand new Bostik South Central Division. 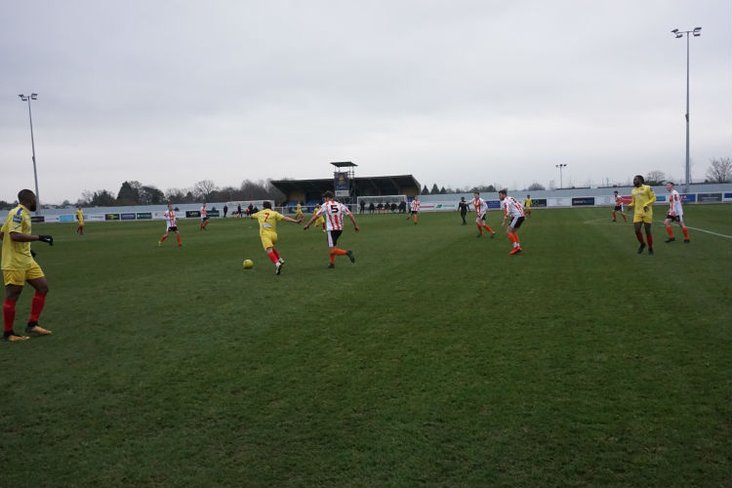 A gloomy result for FC Romania on a gloomy day

It all started for the Wolves, as they are known, in 2006. Vintilă founded the team as a Sunday side in East London as a way of playing some organised football with friends, sporting relief from the working week. The club grew quickly. They were playing Saturday football in the Essex Business Houses League (now the Essex Alliance League) by 2008 and the Middlesex County League by 2010. In 2012 they finished as runners up in the Premier Division. Their home at the Leyton Sports Centre, however, didn’t pass the grading requirements so promotion, on this occasion, was denied.

The club moved quickly and found willing landlords in Isthmian League club Cheshunt. A year later the Wolves once again finished runners-up in the Middlesex County Premier Division. This time promotion was confirmed and they joined the Essex Senior League. In five seasons in the Essex Senior, they never finished lower than sixth. Two third-place finishes in a row combined with the league restructuring saw them progress to step four.

FC Romania have garnered a fair amount of attention during their meteoric rise from Sunday football. In 2014 they entered the FA Cup for the first time. The Wolves made it to the Second Qualifying Round where they faced famous giant killers Sutton United. They narrowly lost the game, that was previewed on the BBC website, 3-2 to the side that were three levels above them. FC Romania repeated the feat this season as they knocked out two Bostik North clubs in Grays Athletic and Soham Town Rangers before losing to Southern Premier side Beaconsfield Town.

FC Romania’s reward for their promotion to the Bostik League was a place in the brand new South Central Division. It gave them a chance to play in the same league as their landlords, Cheshunt. The Wolves have found the new league challenging but they’re just about keeping their snouts above water. They sit in 17th place, but with an eight-point advantage over the bottom three clubs. They lost their first Theobalds Lane derby 2-0 but did manage to record a memorable victory over de facto local rivals Waltham Abbey with a 2-1 victory in December.

Recent results have been mixed as they’ve conceded six goals twice in their last five games but also record a 2-2 draw with Uxbridge as well as 2-0 victories over Egham Town and Hertford Town. Their next opponents were another ‘Town’. This time of the Middlesex Ashford variety. Ashford, based near Heathrow and not to be confused with the Ashford Town who formerly played in Kent, won the first meeting between the two sides in November. Before kick-off, they were nine places, 13 points above FC Romania.

Tangerines leave Wolves with a bad taste in their mouth

The short walk from Theobalds Grove station to Cheshunt, and FC Romania’s, ground was fairly similar to the opening exchanges in the game. Quiet. The main thing of note, in either case, was the cold. The Wolves have recently added former Barkingside and Basildon United boss Michael Walther as their assistant manager. He would have been pleased with the way the home side started as they looked to play out from the back and use striker Chiduben Onokwei as a target man. The forward started off at Marlow this season but has scored 13 times since he joined the Wolves.

FC Romania scarves were on sale at the turnstile and were visible around the ground. Some even adorned the necks of Ambers regulars who’d clearly adopted their tenants as a second time when Cheshunt were playing away. On this occasion, they were in the process of drawing at Bracknell Town as one fan joyously announced in the second half. The joy, and warmth, was beginning to fade from the home side, however, as the visitors began to take control of the game.

A couple of excellent Ashford set pieces were well cleared by the home defenders but it wasn’t long before the visitors took the lead. A well-worked move down the left found James ‘Tony’ Cottee in some space, he then curled an excellent finish into the bottom corner. The visitors had just about edged the first half but FC Romania were still in the game as long as they could get to the break just a goal behind. They couldn’t. This time a defensive mix-up afforded Cottee even more space and this time the finish was a little easier as he rounded the keeper to score.

I didn’t join the locals in switching ends at the break and instead remained in the same spot to give the FC Romania defenders a closer look. To their credit, they played very well for the second 45 minutes as the home side tried to claw back the deficit. They won a few plaudits from some of the travelling Ashford fans who were impressed with their commitment to playing out from the keeper. At the other end, the visiting tangerine defenders were also impressing. They snuffed out any hint of an opening for the Wolves attackers. The game drifted to its inevitable conclusion and Ashford deservedly took the three points back to Middlesex.

Ashford move one place closer to the promotion spots while FC Romania see their cushion over the bottom three cut to five points as Stan, Kyle, Cartmen and Kenny et al [South Park] won for the second time in a week. There is still a long way to go for the Wolves in their first step four season but they look like they have enough to remain part of the Bostik League pack.

For more from Louis, please visit his website, where you will find coverage of other clubs from our league and many of their near-neighbours.

 A midweek festival of football! We've some big midweek matches to look forward to- including a free match on Wednesday. Here's our guide.

His name is Luca...and he doesn't live on the second floor  The Witham Town keeper DOES win awards, though...