Bostik Matchday: Horsham win- despite lard in their hearts! 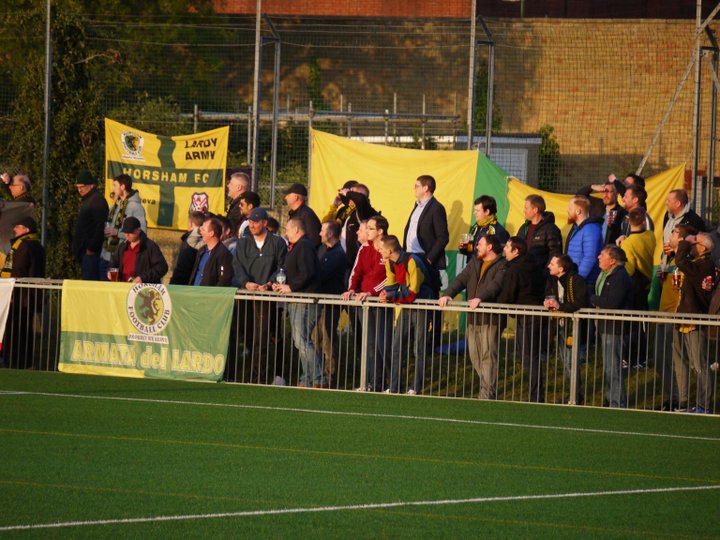 Horsham took on Haywards Heath in our first Playoff Semi-Final- and how the Hornets rose to the occasion! Words and pictures from Culver Road.

Sussex by the sea is a marvellous place to watch football when the sun is shining, and tonight, unlike the last time we came to Culver Road this season, the weather was glorious. On that previous occasion Horsham, our hosts, were facing Poole Town in the FA Cup, and the rain came down, the wind blew it horizontal, and everybody in the stadium, no matter where they chose to watch the game, got soaked to the skin. The only damp in the air tonight would come from the tear ducts of the losing side.

To be fair, and addressing the elephant in the room, Horsham’s opponents tonight could have taken the view that they could begin crying even before the game. To learn that you can’t be promoted through the playoffs even before a ball is kicked, due to a lack of points per game, and that on that basis it doesn’t matter how you perform, could have been rather soul destroying. The fact that those Haywards Heath Town souls were anything but destroyed gave great credit to the approach adopted by the visitors, who had taken the view that they were going to give it their very best and to continue to defy the odds, as they had throughout their debut Bostik season. And who knows, when the FA do their sums in the summer perhaps there may be room for a team who won the playoffs without the required points per game to be promoted after all? Stranger things have happened.

Horsham came into this match as the second-best side in the Division, which should have made them the favourites- but one set of statistics told another story. When Heath last turned up at Culver Road they came back from three-nil down to defeat the Hornets five-four. When the clubs met at Hanbury Park Heath did the double with a two-nil victory. Horsham did have a victory over their rivals in the Velocity Trophy to show for their efforts this season, but Heath shouldn’t have been short of confidence as they prepared to get us underway. 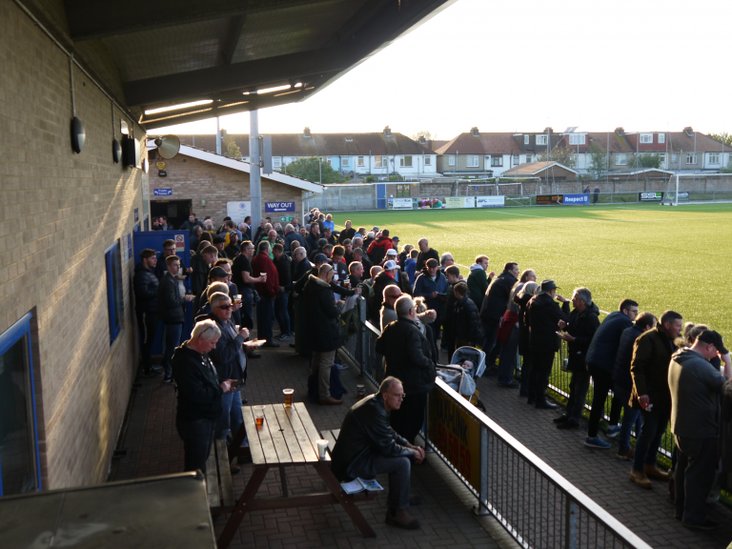 Horsham and Haywards Heath fans before the match

The opening exchanges were rather cagey, and the only action of note involved the Horsham fans, who traipsed in numbers to set themselves up on the grass bank behind the right hand goal, entirely ignoring Sussex County FA signs telling them to keep off it. “’orsham, ‘orsham,” they sang, dropping their H’s with abandon. It’s funny how people only tend to drop H’s, never other letters like, perhaps, S’s. Still, if you are a supporter of Scunthorpe United that’s probably a blessing.

The first chance came in the fifth minute. Lee Harding, once of Heath’s local rivals Burgess Hill Town, curled in a shot from the left hand side of the box which skimmed past the far post. The Hornets settled more quickly that their opponents, but that Harding shot apart weren’t really threatening the visitors goal initially. That looked to change in the tenth minute, as pressure from Tyrell Richardson-brown forced Kieron Rowe to concede a corner, Harding finding Will Miles- another former Hillian- unmarked at the far side of the box. Miles effort was blocked, and the pressure continued, until Chris Smith could only cushion a cross past the near post. As Rob O’Toole- another veteran of the Hillians South Division promotion season- headed a Harding free kick just past the post we could almost have been at Leylands Park four years ago. Smith also spent time as a Green Elephant, and any Hillians fans in the vicinity must have been watching wistfully and thinking about what might have been.

As we approached the midway point of the first half the ball had only been out of the Heath half on half a dozen occasions, and Hornets keeper Josh Pelling could have stayed at home and done his hair- but Horsham had nothing to show for it. That was to change, however, and it was appropriate that it was Harding who made the breakthrough. The winger had been the best player on the pitch, and when the ball fell to him around twelve years out we all knew where it was going. One-nil, and thoroughly deserved. Would that be a wake up call for Heath? As Smith powered forward and forced Anthony Ender into a save one minute later it seemed not.

Heath made a change. Kieran Rowe, presumably injured, wandered off, with Vincent Follea eventually coming on in his place. It didn’t really change the tempo of the match, and Horsham should have increased their lead in the thirty second minute, a lovely ball from Harding giving Harvey Sparks the chance to cross. He did so brilliantly, and the ball found Smith, unmarked, but he couldn’t keep his shot down and it ballooned over the bar. 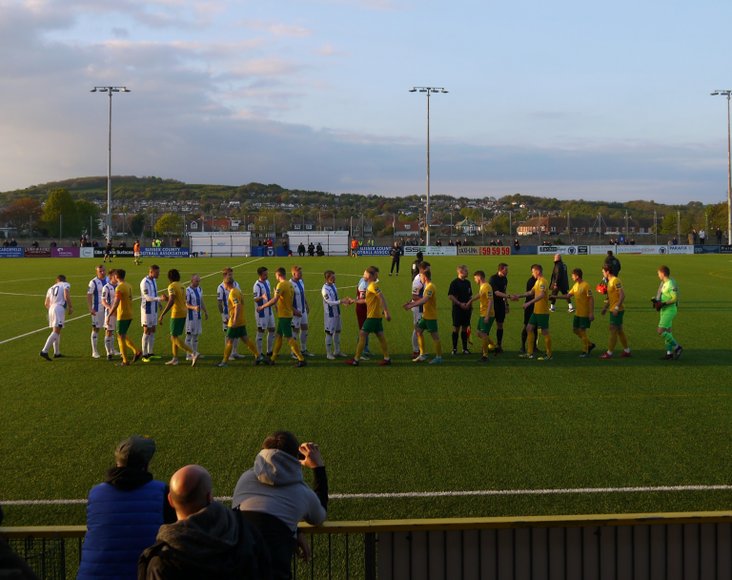 As we approached the break Ender had to make a smart save from a Smith header, and Horsham remained absolutely in the ascendency- but as the old cliché goes, they badly needed another goal. The only save Pelling had been forced to make had been from a header from one of his own defenders, but with the likes of Kenny Pogue and Callum Saunders in their side Heath certainly couldn’t be written off as an attacking force, even thought they’d not managed a shot on target- or off it- during the first forty five minutes.

Heath came out strongly after the break, putting the home defence under pressure for the first time and winning a corner. It came to naught, but there was more purpose about the visitors, and they came the closest they’d managed so far on fifty minutes, Pogue glancing wide a header from an Alex Laing cross. Horsham responded, and at the other end O’Toole did everything right until it came to the finish, making himself space before ballooning the ball high and wide. In trying to defend against O’Toole Follea managed to pick up an injury, which brought the rare sight of Heath having to substitute the substitute. George Landais was the new arrival.

Another chance came and went for Horsham, Richardson-Brown charging down the right and firing across goal, Smith stretching full length but unable to add a final touch. Heath then went up the other end and earned a corner, then another, before Horsham sprinted forward once more and Smith came close to adding that elusive second, instead earning a corner at the other end. Another followed, and from this one Miles headed just wide. Horsham continued to press, and their fans roared them forward.

The breakthrough finally came in the sixty third minute, and it came to O’Toole. It wasn’t a difficult chance for the striker, he had time and space to pick his spot, but it brought forth a roar of relief that could undoubtedly have been heard in Horsham itself. The Hornets deserved their two goal cushion, but goodness, they’d made hard work of getting it. They didn’t let up, and a Harding shot went past the far post as the crowd got louder still. Skipper Jack Brivio headed over as Horsham showed no sign of letting the pace slacken. 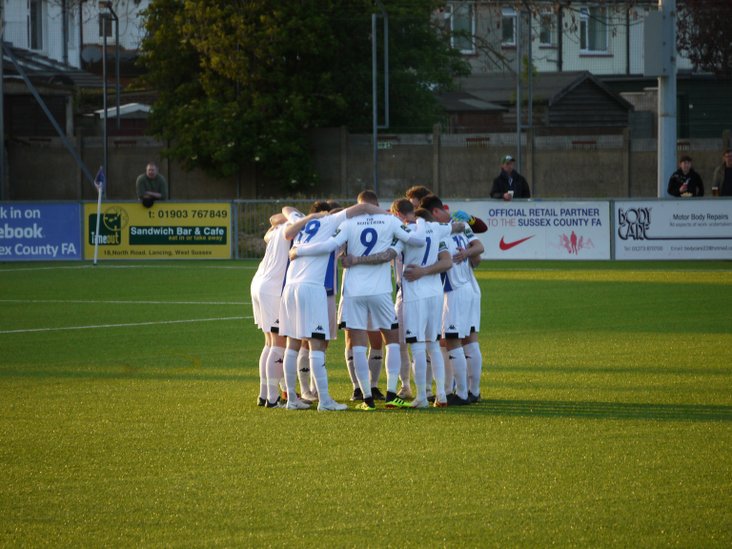 With twenty minutes remaining Horsham made their first change, Smith going off to an ovation with Kieran Lavery his replacement. The substitute had the next chance, forcing a great save from Ender, and the keeper showed safe hands once more as he claimed the resultant corner.

Heath then made their final change, Jamie Weston being replaced by Omar Folkes. It made no difference. The match slowed down somewhat, rather unsurprisingly, but there was still time for Brivio to force a great save from Ender and Harding, somewhat unsurprisingly overlooked for man of the match, to fire the follow up into the side netting from a tight angle. “Give me lard in my heart,” sang the home fans, delirious with joy if perhaps sailing close to cardiac arrest. In the very last minute Lavery got away down the left, and delivered an excellent cross to the back post. In came Richardson-Brown, and it was three. If there had been any doubt- and to be fair, there wasn’t much- it was game over now. A few minutes later it actually was game over, and the Hornets were through to the Final. We’d be back here on Friday night.

The Hornets were good value for their win tonight. Whether Heath would have been stronger opponents had they not felt the outcome was not something they could influence is difficult to tell, but take nothing away from Horsham, who were terrific from first to last.

If their last game in somebody else’s ground allowed them to earn promotion, and as such start their first season in a new division in a ground of their own, that would be some kind of fairytale, wouldn’t it? The opponents, whether Hastings or Ashford, will be determined to stop that from happening- but on this form you wouldn’t want to bet against it. 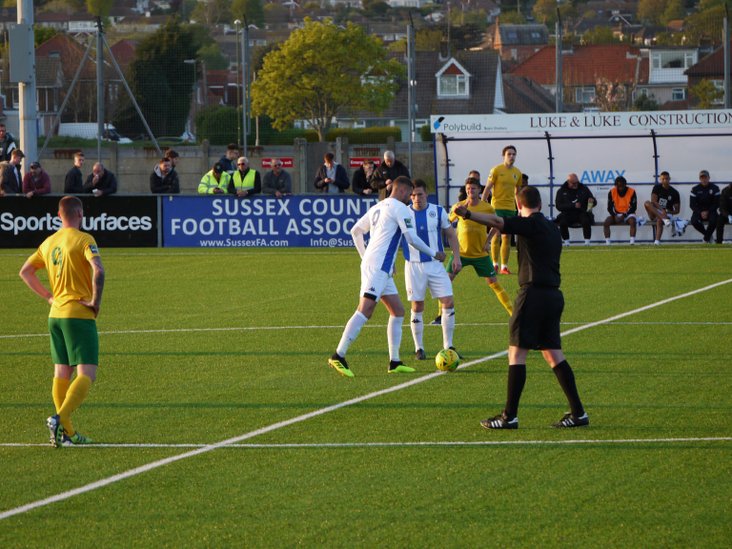 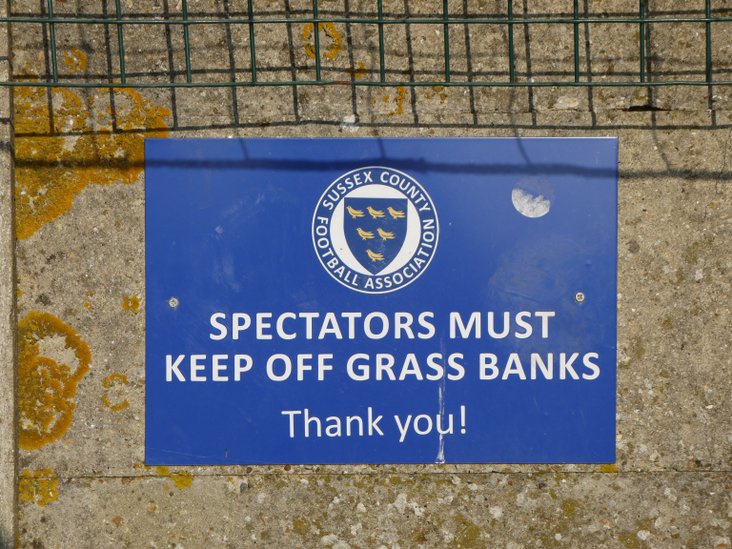 Keep off the grass!

 Nuts and Bolts join the Hornets in the Final It took one hundred and twenty minutes, but Ashford triumphed!

Get with the e-programme: Saturday 27 April 2019  For the last time this season, a round up of electronic programmes