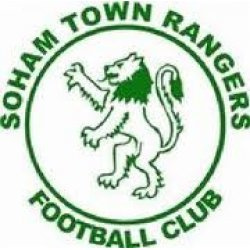 The deadline had passed, and then we got this submission from the fine folk of Soham Town Rangers. So here it is- don't say we don't spoil you! Oh, and look out for tractors!

We asked a supporter from each of our member clubs to answer the same series of questions as part of our preview of the new season. We also asked them to predict how their particular division would finish, from one to 24- and their answers will be revealed in a collection of Supporters Prediction Tables to be released the day before the big kick off.

Here are the answers of Simon Cullum, representing Soham Town Rangers. Sadly they arrived too late for Simon's views to be used in the prediction table you saw yesterday- however the only way they would have affected the outcome is that they'd have made first place easier to calculate!

The final whistle after the 4-3 home win against Maldon and Tiptree on the final day of the season.

We went into the game knowing we had to win to secure our survival. With five minutes remaining we were losing 3-2 and in the relegation zone, only to score two quick goals to secure the win and avoid relegation.

Losing our managers and half the squad just before Christmas, leaving new manager Rob Mason to rebuild the squad midway through the season, then going on a sixteen-game winless run which saw the team drop from mid-table into a relegation battle at the end of the season.

If we can make a decent start to the season, there’s no reason we can’t make the top half.

The new grounds in the League – Aveley, Canvey Island, Hertford, but also the local derbies with Mildenhall Town.

AFC Sudbury – Very good facilities, and had some good games against them going back to when we played each other in the Eastern Counties League.

This year it’s Mildenhall Town, as for the first time since we were promoted from the Eastern Counties League in 2008 we have a proper local derby.

Be prepared to get stuck behind tractors on route to the ground!

The 2008 Eastern Counties winning side will always have a special connection to Soham supporters. Many of the side had been together for a while, with Michael Simpson and Martin Bromwich both spending thirteen years at the club, each making over 500 appearances.

9. Finally, predict who will fill the top five positions at the end of the forthcoming season:

Supporter end of season predictions 2017/18: Bostik North Division  For the last month supporters of clubs in our league have been predicting the outcome of the season about to start. Well we've done the maths, so here is their prediction table for Bostik North.