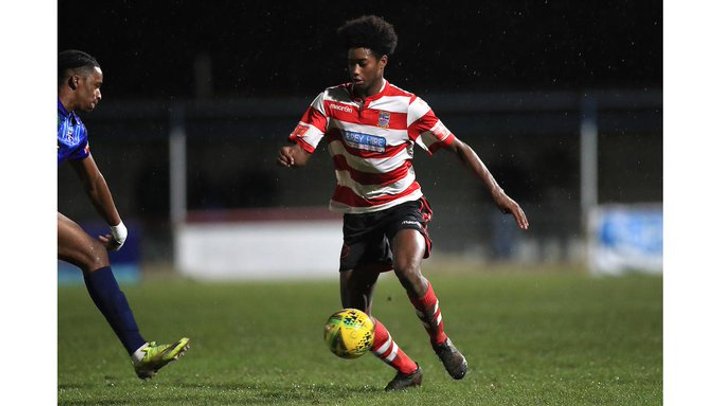 Kingstonian have announced the transfer of young full back Bryant Akono Bilongo to Championship side Middlesbrough for an undisclosed fee.

Bryant moved to the K's in the summer from Hanworth Villa, who are in the Combined Counties League. The Villains were in fourth place and unbeaten when the 2020-21 season came to a premature end. He also played for Villa's youth side.

Upon the occasion of his signing, K's boss Hayden Bird stated:

"He is a player with real potential. With Ben Harrison leaving, we needed to add a left back to our squad. Having looked at a few options, we decided to approach Bryant. We are delighted he has joined us."

He wasn't wrong about that potential, was he?!

Bryant has made twenty eight appearances this season, and made the number three shirt his own. Hayden told the club website today:

"Everyone at the club is delighted for Bryant. There is no doubting that he is a young player with the potential to enjoy a very successful football career. Bryant has been exceptional this season and thoroughly deserves this wonderful opportunity."

Boro are good at picking up Pitching In isthmian talent. In recent years they have also captured Sam Folarin and Isaiah Jones from Tooting & Mitcham United, both of whom have had great success- indeed Isiah has made twenty five appearances this season, and scored the winner against Swansea City last month.

 We cordially invite you to two work-related parties this evening It's Wednesday, and we've football! Well it looks like football, and there will definitely be people playing football, but who knows? Head along to Cray Wanderers or Sutton Common Rovers- no need to bring a bottle!