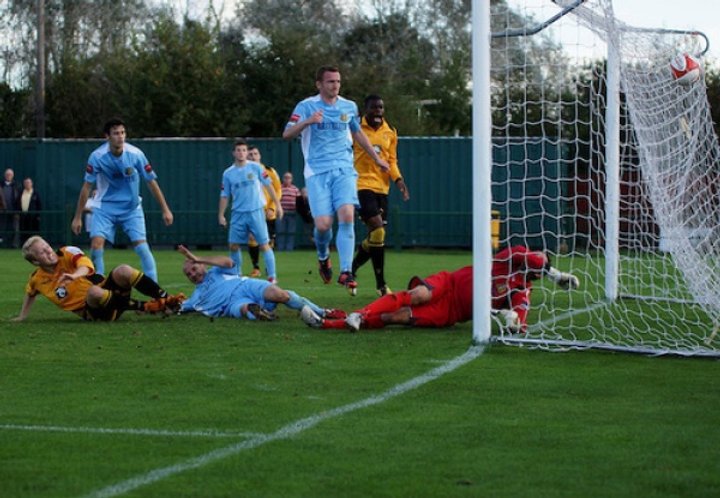 BURY TOWN were convincing winners of the FA Cup clash between the third and second sides in the Ryman Premier table. Hampton travelled to Suffolk having conceded only two goals in ten league and cup matches this season, but saw that proud record wrecked a

Sam Reed started the rout after nine minutes and set up the chance for Luke Ingram to double the lead in the 34th minute. Another Reed strike midway through the second half effectively settled the outcome, with Hampton’s misery completed by a late effort from Connor Hall.

Also through are East Thurrock, bidding to reach the first round for the second successive year. They ended Maidstone’s high-scoring Cup exploits with a 3-0 victory at Corringham. Sam Higgins set them on their way with a 23rd-minute penalty and Reiss Gilbey made it 2-0 on 35 minutes (pictured courtesy of Mikey Cartwight/ponderosapics). Maidstone’s hopes of recovery were hit when Alex Flisher was sent off midway through the second half and Kris Newby put the icing on Rocks’ cake with two minutes left.

They were the only two all-Ryman ties, and just one club from the league put out ‘foreign’ opposition. That was Lowestoft, for whom a 59th-minute goal by Joe Francis was enough for victory at Southern League side St Albans. There was little to choose between the sides in the first half, during which Lewis Toomey hit the bar for the Saints, but the Trawlerboys raised their game after the break and deserved to go through.

Four more Ryman sides will be in the hat on Monday, and three of them have home advantage in their replays including the Premier’s bottom club, Thurrock, who did well to draw 1-1 at Welling, fifth in Conference South.

Charlie Stimson headed his fifth goal of the season - none have come in the league – to give Thurrock a fourth-minute lead and although Ross Lafayette levelled matters on 33 minutes Welling could do no more. Matt Turpin found the net for Thurrock in the closing stages but a flag was up for offside and the sides will meet again at Ship Lane on Tuesday.

Hendon will also replay at home against Conference South opposition on Tuesday after a 2-2 draw at Eastbourne Borough. Greg Ngoyi fired them ahead just after the interval and struck again to restore their advantage immediately after Chris Shephard’s 71st-minute equaliser. Shephard saved the Sussex club with his own second goal five minutes from time and Hendon had Scott Shulton sent off in added time.

Met Police had to settle for a 1-1 draw at Step 5 club Dereham, despite taking an 11th-minute lead when Craig Brown’s intended cross landed in the net. Shaun Bammant came off the bench at half-time for the Eastern Counties club and equalised within two minutes, earning his side a trip to Imber Court on Wednesday.

Hastings face a testing replay at Hitchin on Monday after a 2-2 draw at the Pilot Field. Dee Okojie pounced on a poor back-pass to give the Sussex club an 11th-minute lead but John Frendo’s free-kick wiped that out within three minutes. Okojie set up the chance for Brad Goldberg to put Hastings back on terms two minutes after the break and Frendo turned goalmaker as he sent Zak Burke through to complete the scoring in the 62nd minute.

Premier leaders Margate will be disappointed to have gone down 1-0 at home to lower-division Southern League side Slough. Danny Burnell, who scored four times in an FA Cup tie for Wealdstone two seasons ago, got the goal four minutes before half-time. Margate almost saved it in the closing stages, when Alex Rhodes missed a good chance and a Richard Avery header hit the bar.

Cray took the lead at home to Chelmsford, of Conference South, but were beaten 2-1 as Jamie Slabber headed home twice in four minutes soon after the interval. Chris Saunders had put Cray ahead right at the end of a scrappy first half.

Brentwood were beaten 3-1 by Step 5 side South Park. The Reigate-based Combined Counties League side took the initiative with a second-minute goal by Kieran Lavery and doubled their lead through Chris Smith at the other end of the half. Alex Read put Brentwood back in the game with a close-range header after 48 minutes but Jack Higgins struck for the home side seven minutes later and Blues were unable to respond. It might have been worse, but the crossbar denied Smith his second goal.

 Derby date for Rocks THE Ryman League's three definite FA Cup survivors all face away ties in the fourth qualifying round as they bid for places in the competition proper.
Scholars frustrated after bright start  POTTERS BAR doubled their lead in Ryman North tonight (Wednesday) but were left frustrated after taking only a single point from a 1-1 draw at Ilford.