Can anyone stop the Robins? 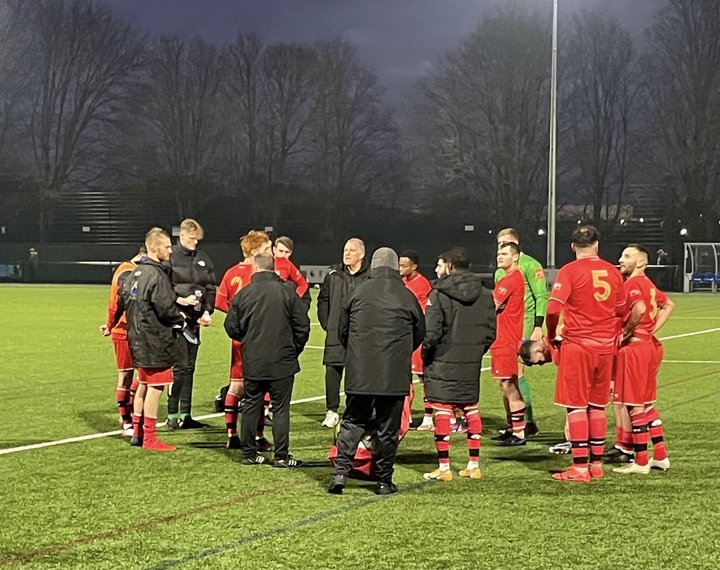 Another win, and still fourteen points the gap for Bracknell- and we already seem to have a six team playoff battle! Elsewhere, a big win for the Saints- and Northwood make it four consecutive away wins

Can anyone stop the Robins?

Another win, and still fourteen points the gap for Bracknell- and we already seem to have a six team playoff battle!

Our big match saw leaders Bracknell Town travel to face third place Uxbridge. The Robins, starting the day fourteen points clear, saw Seb Bowerman put them ahead midway through the first half- Bowerman’s thirteenth goal in his last seven matches, a fantastic return. The hosting Red Army have been given plenty to cheer about this season, but sadly for the home faithful this wasn’t to be their day. It was quite sad for the neutral, too, as if someone doesn’t begin to defeat the Robins soon they’ll be champions by March!

Chertsey Town were hoping to close the gap on Bracknell- or at least not lose further ground, and they managed the latter. They hosted Ashford Town, the Tangerines currenrly without a manager after Luke Tuffs departure to Leatherhead, and the Curfews took the lead six minutes after half time when Magnus Abisogun beat the visitors rearguard. The same player doubled the advantage with thirteen minutes left, and the hosts eased to victory to ensure that they stay in second place.

Marlow have scored fewer goals than any of the rest of the top six, but they’ve conceded fewer, too- only six all season coming into their match with Chipstead. They were a goal up on nine minutes, Khalid Simmo opening the scoring, and the same player doubled the advantage just before half time. With ten minutes left Michak Stanic-Stewart broke the Marlow rearguard for only the seventh time this season for the Chips, but there wasn’t to be an equaliser, and Marlow are up to third- seventeen points behind the leaders albeit with four games in hand.

Hanwell Town got their thirteenth goal this week when the always-threatening Ogo Obi gave them the lead at Westfield, his twentieth goal of the season so far. Number fourteen/two came twenty minutes after half time, Tom Collins going one better than Obi with goal twenty one, and after that the Geordies settled for what they had- and went fifth.

Basingstoke Town hosted Northwood, and the visitors shocked the five hundred and thirty one amongst the home crowd when taking the lead on seventeen minutes, Josh Helmore, who also scored against Bedfont Sports in the County Cup in midweek, getting his second in five days. It was two-nil to the visitors just after half time when Teddy Stacey got into the act, and when Sydney Ibie made it three just before the end it was very much three points Woods. Brad Wilson got one back for Town just before the end, but it didn’t matter all that much and they slipped to seventh. That’s four away wins on the spin for Northwood- pictured courtesy of the club- and the second of those against promotion candidates.

Sutton Common Rovers held out for eighty nine minutes against Bedfont Sports, but the visitors have become famous for their late goals and got another, Lewis Flatman breaking hearts at Gander Green Lane. That takes him onto double figures for the season, and his side to within two points of the top five.

A Dawid Rogalski spot kick gave bottom of the table Chalfont St Peter the lead at Binfield, and for all the Moles tried to dig themselves out of trouble the next goal also went the way of the Saints, Jordan Junor doubling their lead with nineteen minutes left. Sean Moore set up a tense last three minutes by pulling one back, before Andy McCorkell saved a spot kick to keep his side in the lead. Panny Boxer’s red card caused even more Saints nerves, but they held on for a critical three points and move up to seventeenth.

South Park and Thatcham Town have both been short on victories of late, both having lost four of their last five, but Sparks Melford Simpson hoped to earn his side an away win when he put them ahead on twelve minutes. The equaliser came two minutes before the break, Nathan Jones with it, and the turnaround was complete when Harry Harvey made it two-one to the hosts midway through the second half. Simeon Weekes made the points safe from the spot right at the end, and the Kingfishers are up to eleventh.

In our early kick off, Tooting & Mitcham United welcomed a Guernsey side who were playing their first match since Sunday 12th December. The Terrors took an early lead, Mark Waters scoring from the spot on two minutes, but the equaliser arrived just before the half hour, Ben Le Tocq with it, and that was that. One point each was the outcome. The Green Lions are bottom of the table, but they do have six, seven or even eight games in hand.

 Hastings leave it late- but now have a seven point lead Heath stage a fabulous comeback, the Millers hit four, whilst Sports shock the Brickies. It’s our Pitching In Isthmian South East round up.

Gulls and Stow win handsomely, but the Millers hold onto top spot  Our top three all win, Dereham get back to winning ways, Brentwood go top five, Witham shock Bury and the Seasiders good run continues. It’s our Pitching In Isthmian North Round up.