Canvey produce a resurrection, whilst Grays hit six and the Magpies fire five. 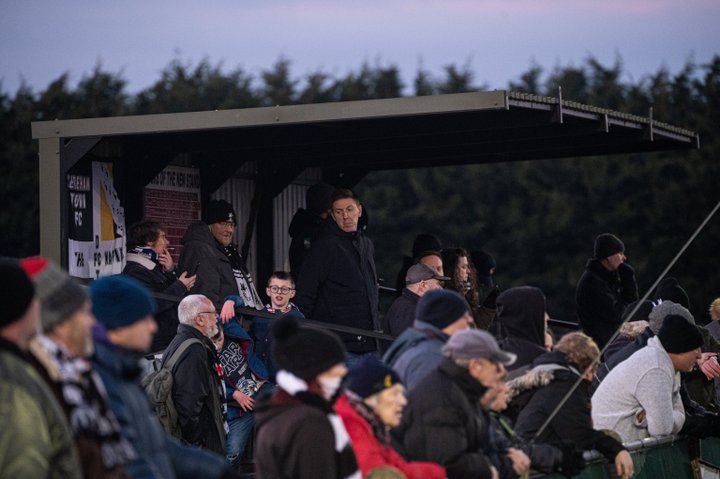 It’s our Pitching In North Division round up- and what an afternoon we had!

Our leaders, Canvey Island, welcomed an improving Barking to the Frost Financial Stadium. In their last three matches the Gulls had scored twelve goals and conceded only two, and were looking back to their best with five wins from six, whilst their visitors were climbing the table with only one defeat in six- and it was Barking who got their noses in front, George Purcell opening the scoring just after the half hour. The home side were silenced once more ten minutes before the break, Kieran Jones making it two to the dismay of most of the four hundred and sixty four present, but they were certainly not silent when three goals in the last seven minutes somehow earned them victory! Matt Price got the first from the spot, Bradley Sach drew them level with three minutes remaining, and two minutes after that Evans Kouassi made it three, as the visitors wondered quite what had happened.

Barney Williams saw red for the visitors, and the Gulls marched on and remained two points clear at the top.

Second place Aveley welcomed fifth place Brentwood Town- and four hundred and seventy seven fans- to Parkside. The visitors started the day eight points adrift of their hosts, albeit with three games in hand, but these were our two form teams as we approached kick off, both having taken twenty five points from their last ten matches. The opening goal came eleven minutes after the break, and it went to George Sykes for the Millers- and it turned out that it was the only goal. The Millers remain second, ahead of Stowmarket Town on goal difference, whilst Town slip out of the top five.

Stowmarket Town knew that any slip from the Gulls or the Millers could see them back at the summit. They welcomed Heybridge Swifts, with both in fine form- Swifts had lost only two from ten, their hosts just one- and Town broke the deadlock three minutes before the break, Willie Clemons continuing his good run of form by putting his side ahead- his third goal in eight days. As we approached the end Luke Brown saw red for the hosts, but they held on to stay on the coat tails of Canvey and level with the Millers.

As we kicked off there was a seven point gap from third to fourth, the side in fourth, Dereham Town, looking to try and claw back that deficit. The Magpies hosted seventh place AFC Sudbury, the Yellows having slipped off the rails somewhat with only two wins from ten, and it was the hosts who scored our first North goal of the afternoon, Shaun Bammant putting them ahead on ten minutes. They doubled their advantage from the spot ten minutes before the break, Adam Hipperson scoring from the spot, and four minutes later the same player made it three.

It got worse for the Yellows when Jake Clowsley saw red, and worse still when Toby Hilliard made it four for the hosts. The ten men got one back with an own goal fifteen minutes from time, but the Magpies them grabbed a fifth, Rhys Logan getting on the scoresheet. That was that, but the gap remains seven points to third place. Dereham fans pictured courtesy of the club.

Grays Athletic were hoping to climb back into the top five with victory at Romford- and did just that. Boro’s point against Sudbury last time out was their first since mid October, and they were quickly behind in this one, James Smith putting Athletic ahead just before the quarter hour- and the visitors were two up twelve minutes before the break, David Knight scoring from the spot. Knight made it three on sixty four minutes, Jamie Smith got a fourth sixteen minutes from time, and Aron Gordon got a fifth and a sixth just before the end to seal a fine victory for the visitors.

Felixstowe and Walton United, in fine form with nineteen points from their last twenty one, welcomed Hullbridge Sports to the seaside. Sports picked up an impressive draw in midweek against Bury Town, but and have looked much improved over the last month or so, and they went ahead early on, Tony Stokes with his eighth goal in fourteen matches. The second half saw a late equaliser from Sam Nunn, scoring from the spot, and then right at the death Henry Barley took that points tally to twenty two from twenty four with a winner for the Seasiders.

We had a mid-table battle as Cogggeshall Town welcomed Bury Town. The Seed Growers had only two wins from ten coming into this one, whilst their visitors were hardly in the best of form either, with only one win from their last seven- but it was the hosts who broke the deadlock just before the break, Kudos Oyenuga with his first league goal of the campaign. The lead was doubled on the hour, Ibrahim Kehinde making it two, and that was that.

Great Wakering Rovers had seen a good run come to an end with two defeats. They welcomed a side one point above them and who would love a good run, Tilbury, the Dockers five games without a win and with only two victories from their last ten- and the hosts broke the deadlock with an own goal seventeen minutes before the end. There was still time for the Dockers to take something from the game, and they took their chance, Chris Millar keeping his nerve to equalise from the spot right at the end.

It’s a little early to call anything a relegation battle, but Witham Town v Basildon United, with only two points between them as we kicked off, looked rather like one nonetheless. Witham had an impressive win over Bury Town last time out, their first win in an awful long time; whilst the Bees had one win and five defeats from their last six, conceding two goals in each of those reverses- and got themselves in trouble in this one when Ahmed Mohammed saw red just after the half hour. Could Town take advantage? They couldn’t, and we ended up with a goalless draw. The Bees will be the happier tonight.

Hashtag United defeated Maldon & Tiptree one-nil on Friday night. Sam Bantick got the only goal from the spot on fifteen minutes, and the Jammers saw Shad Ngandu and Lordon Akolbire dismissed in the first half.

 More Bracknell plaudits, more Bowerman goals- whilst the Geordies wallop Uxbridge and Woods shock Marlow We also had wins for Chertsey Town, Westfield and South Park. It’s our Pitching In Isthmian South Central round up.

Can the Urchins trip up the Mackerel Men- and do themselves and the rest of our promotion hopefuls a favour?  We've a big afternoon in prospect in the Pitching In Isthmian Premier. Here's what's occurring.