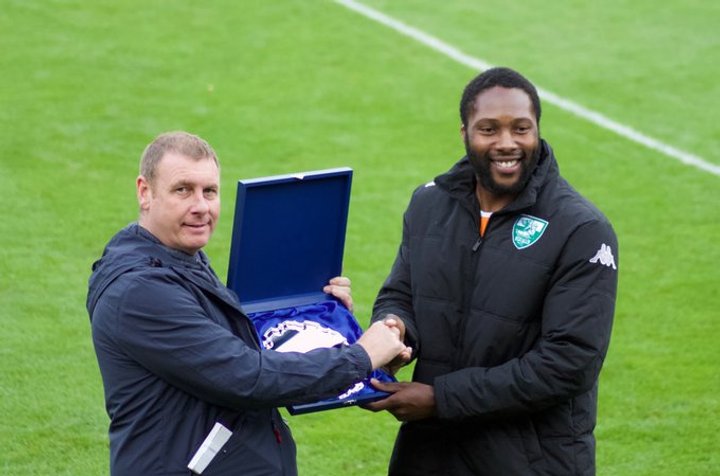 Tanners legend Nnamani turns out in pink and brown

The eagle-eyed amongst you might have spotted a debutant for Corinthian-Casuals as they faced Harrow Borough in the London County Cup on Tuesday night- and anyone with a passing interest in the Pitching In Isthmian League is likely to have immediately recognised his name. Lining up wearing number five until being replaced at half time was Leatherhead- these days, former Leatherhead- legend Jerry Nnamani.

Jerry was a mainstay of the Tanners first team from 2011, and reached the milestone of four hundred appearances in September 2020- he's pictured, image courtesy of the Tanners, being deservedly awarded for that achievement. He made what seems to be his last Tanners appearance in the FA Trophy defeat at Felixstowe and Walton United on December 8th 2020. He can play both in the centre of defence and up front, and did both whilst in green.

He previously played for Bromley, Crystal Palace and Sittingbourne, but that was so long ago we can't really remember it!

Whether this is a long-term return to Isthmian pastures for Jerry or not- we believe he still commutes four hundred miles for a home match- it's good to see him back.