Could it be Towners Tuesday? Can Canvey conquer? Will marvellous Marlow win again? Will we get a VCD victory? 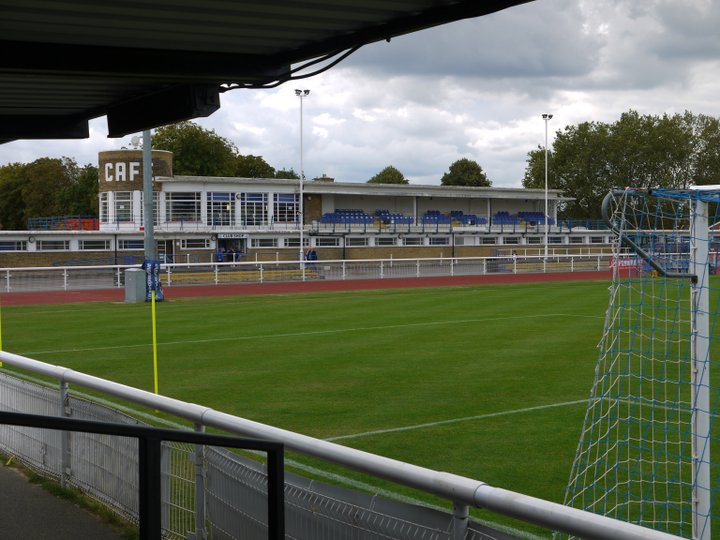 We’ve an exciting set of fixtures this evening- and far too much alliteration for our own good. Here’s our preview.

Enfield Town, two points off the top of the table, will reach the summit this evening if they can defeat Wingate and Finchley. It will have to be a win- a point would see them remain in third- but the Towners are in good form, having defeated the side currently at the top of the table- Kingstonian- and the side at the bottom- Leatherhead- in their last two matches. The Blues, with one defeat in six matches across all competitions, will be no pushovers, however, and Bilal Sayoud, with seven goals already this season, will be looking to get back on the scoresheet after going three matches without a goal- his longest barren run of the season. For the hosts, Mo Faal is on eight.

The last four matches between the two have seen three draws and one Enfield victory, and it’s five years, almost to the day, since the Blues last won at the QEII Stadium.

Lewes could climb to second with victory over a Leatherhead side without a win since the opening day. The Tanners have conceded twenty nine league goals so far this season, and scored only eight, whilst their hosts are the biggest scorers, firing in twenty four- including six in victory at Margate on Saturday. The Rooks have a three man goal scoring army, with Joe Taylor on nine, with Taylor Maloney and Ollie Tanner on six each.

Leatherhead are under new management- indeed they have an entirely new management structure (see our earlier article) and will want to impress. The last time the two met at the Dripping Pan, back in December 2019, the visitors left with the points after a one-nil win.

A win for Haringey Borough at Bishop’s Stortford could send them into the top five. Borough are due a victory- they’ve drawn their last three league matches and actually don’t have a league win since August Bank Holiday Monday- whilst their hosts were on a fabulous run until they went to Worthing on Saturday and were hit by the Manager of the Month curse! Prior to coming up against the Mackerel Men Stortford had won their previous three matches and scored twelve goals in the process, so they’ll be looking to show that kind of form once more.

Margate will want to bounce back after their previously water-tight defence was breached six times by Lewes at the weekend. They travel to Merstham, who will be full of confidence after defeating Corinthian-Casuals to move up the table- and, of course, because they walloped the same opponents in the FA Cup less than a month ago.

Hornchurch will be hurting after grasping defeat from the jaws of victory against East Thurrock United on Saturday. The Urchins, who have had a hit and miss sort of season so far, will be looking to get back to winning ways as Cheshunt come to call, the Ambers having a similar campaign and only one point behind our FA Trophy holders. Craig Edwards men have shown moments of brilliance this season, and have scored three goals on five occasions this season- indeed, they’ve scored three in every victory but one.

The Urchins have won three of their last four meetings with the Ambers, the other ending in a draw.

Potters Bar Town host East Thurrock United. The visiting Rocks will have cheered themselves up no end by the way they defeated Hornchurch on Saturday, going behind three times before hitting back to win four-three for their first league win since the end of August; whilst the Scholars ended a run of three consecutive draws, two of which were against sides in the top five, by winning at Horsham at the weekend. The Scholars have won the last two meetings between the two, but the Rocks won the five prior to that.

Canvey Island are still unbeaten, and are on a magnificent run as they head to Barking tonight knowing that victory will take them to the top. Their penalty victory over Ware in the Trophy on Saturday was their fourth in a row- and the first time in that run they haven’t scored four goals in victory, having to settle for two. Barking, in contrast, have lost their last four matches in all competitions after having a fabulous start- but a win tonight would catapult the Blues back into the top five; indeed a very large win could even take them above their second placed opponents. Four-nil would do it!

Felixstowe and Walton United also have their eyes on the top five. The Seasiders, who had a fine Trophy win at Maldon & Tiptree at the weekend, are on a good run, with three wins from four in all competitions and only leaders Grays Athletic inflicting defeat during that period. Heybridge Swifts head to Walton Road having got their campaign back on track during the last few weeks, defeating the Jammers and Barking, drawing with Aveley and losing only to Canvey. With five goals in six matches Andy Fennell is on fine form for the visitors.

Coggeshall Town have had a hit-and-miss start to the campaign, but whilst they aren’t scoring many goals they aren’t really conceding many either and four games unbeaten in the league, with two wins and two draws. Their opponents, Hullbridge Sports, would love to have had a hit-and-miss start as so far its been more miss and miss, still without a league win and having departed both FA Cup and FA Trophy at the first hurdle. Sports have lost three of their last four matches by four goals to one, and have kept only one clean sheet all season.

Under new management Brentwood Town travel just past Southend to take on Great Wakering Rovers, both sides celebrating fine away wins in the FA Trophy at the weekend. Rovers have very much been a cup team so far this season, winning four of their five knockout matches whilst still searching for a first league victory; whilst Town ended a five game winless streak with that victory at Corinthian and will be hoping for a first League victory since August Bank Holiday Monday.

Five matches, five wins, not a single goal conceded- the season couldn’t really be going any better for Marlow. Tonight they travel to face a Chipstead side who, with Tom Collins on ten goals, will have designs on breaching the visitors defence- and who will be confident after defeating Aylesbury United in the FA Trophy on Saturday. Marlow avoided the Manager of the Month curse when grinding out their own Trophy victory at the weekend, and know that victory will take them into second place- a point behind leaders Uxbridge with two matches in hand.

Sutton Common Rovers will host South Park. This will be Rovers first home league match of the season- a feeling that the Sparks will know only too well, as ongoing 3G works mean that they’ve played every home match of their own at someone else’s home! Rovers have lost their last four matches in all competitions, whilst the Sparks have only one win in their last seven- the two separated in the table at kick off only by goal difference.

VCD Athletic could close to within a point of the leaders if they can overcome Corinthian at Oakwood. Vickers are unbeaten in the League since Saturday 28th August and have won their last three, scoring nine goals in the process whilst conceding only one. Their opponents have hit something of a sticky patch, without a league win since the opening day and without a win of any sort since August 21st, but they won’t be hitting the panic button just yet as all of their defeats bar one have been by a single goal.

 Enfield and Canvey hit the top, South Park hit six, and Marlow’s perfect record ends It's our round up of a high-scoring Tuesday night