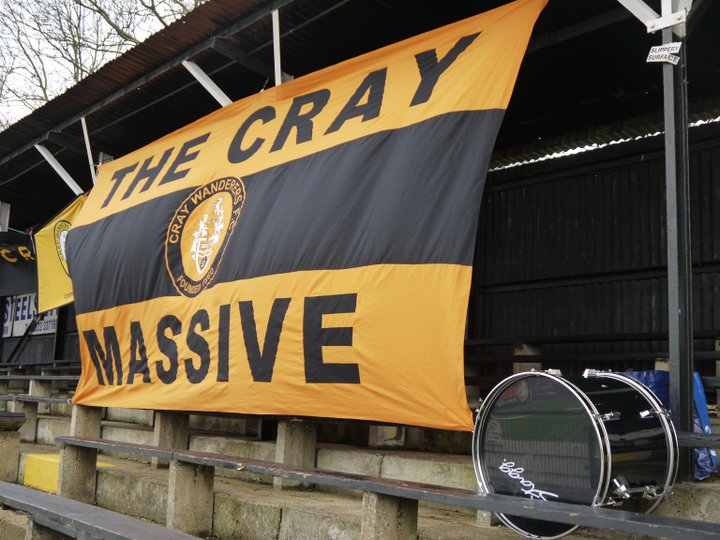 Because we thought you hadn't had enough Cray Wanderers transfer news today, a second debutant in the defeat at Cheshunt yesterday was former Hornchurch legend Chris Dickson.

It's difficult, perhaps, to become a legend in two years, but Chris had a record for the Urchins which was better than a goal every two games, as well as assisting seventeen more. He was, of course, a big part in their run to Wembley in the FA Trophy, and fully deserved his winners medal.

Alex Sharp, Hornchurch chairman, wrote in a match programme upon his departure from the Urchins earlier this month:

“I was really sad to hear Chris would be moving on, as he has made such a massive impact on the club since joining from Hampton & Richmond and has given us many memorable moments over the past year, culminating in our history making FA Trophy win, which none of us will ever forget.

Chris is a fantastic footballer, one of life’s characters who people want to be around, his enthusiasm is infectious and we are a better club for having had Chris play for us these past seasons. Chris has had a great opportunity to rejoin the club where he started his career as well as an opportunity to move his business forward at the club and whilst I know it was a tough decision for him, it is one we fully understand and I’d like to take this opportunity to thank Chris for everything he has done in his time with the club, and to say that you will always be welcome at Hornchurch at anytime, in any capacity, thanks for the memories, you will be sorely missed.

My lasting memory, it would be easy to say the nod down for Liam Nash’s goal in the FA Trophy and his influence on the game when he came on, but for me, that penalty against Notts County to put us into the final will never leave. You’re a great man Chris Dickson, very best wishes from everyone at Hornchurch for the future.”

Prior to his time with Hornchurch, Chris played for Hampton and Richmond Borough. He has also turned out for the likes of Chelmsford City, Sutton United, Dagenham and Redbridge, Charlton Athletic, Dulwich Hamlet, Gillingham and Bristol Rovers.

 Get with the e-programme: 23 October 2021 Our electronic programmes from the weekend, for those who are interested. For those who aren't- "Down with this sort of thing! Careful now!"