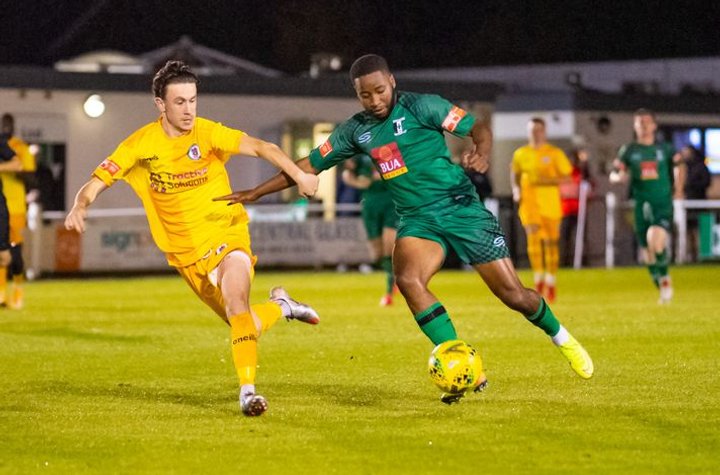 Wins for the Wands and the Millers, whilst Grays and Invicta also advance

Cray Wanderers and Cray Valley PM were both at home in the FA Cup First Qualifying Round last night, and both triumphed by three goals to one.

The Wands hosted Fisher, conquerors of Tooting and Mitcham United in the last round, but unlike the Terrors never looked like slipping up. Jason Banton gave them an early lead, and despite an equaliser just after the half hour Freddie Parker restored the advantage just before the break, and another from Banton on sixty three minutes made the tie safe.

The Millers hosted Burgess Hill Town, and were three up by the break, Connor Dymond, Francis Babalola and Denzel Gayle putting the ball past Josh James in the Hillians goal. Alex Laing got one back from the spot, but despite pressure from the visitors the Millers held out to progress. The image above is from that game, taken by Dave Cumberbatch, and you can find the rest of his shots here.

Folkestone Invicta travelled to Wingate and Finchley, and the two will meet again in the Pitching In Isthmian Premier League on Saturday. The Blues will hope for a rather different result on the Kent coast, as they were walloped on their own patch last night, Invicta leaving four-one winners. Ian Draycott and David Smith in the first half, Scott Heard and Sam Hasler in the second, got the visitors goals, Chris Doyle getting a last minute consolation for the hosts.

Grays Athletic hosted Potton United, and our side fell behind after twenty three minutes, but bounced back to win three-one. Ryan Melaugh got the equaliser after thirty six minutes, and after the break Tony Stokes and Moroyin Omolab made sure of progression.

The draw for the next round will be released on Friday lunchtime.

 It’s Trophy Time! The First Qualifying Round of the FA Trophy starts this weekend, and a number of our sides are involved. Here’s our guide to the action.