Dulwich have that X-factor 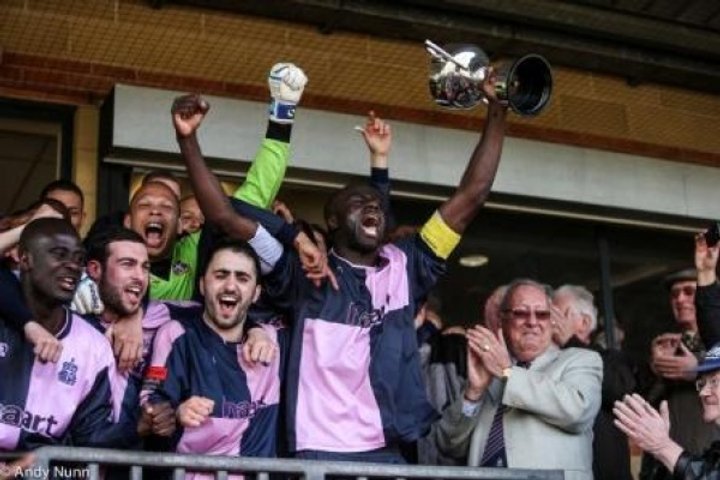 IT WAS a nailbiting afternoon yesterday (Saturday) at Champion Hill – but Dulwich had the X-factor in Xavier Vidal, whose goal earned them the point they needed to clinch the Ryman South title.

Dulwich have been the nearly men in the last three seasons when they have twice been beaten play-off finalists and twice runners-up in the League Cup.

It looked as if they might be condemned to the play-offs again when, after Huddersfield-bound Danny Carr had twice gone close in his final game for Hamlet, visiting Burgess Hill pinched a 29th-minute lead through Nick Wheeler.

It was almost halfway through the second half before Vidal hammered in the equaliser from 18 yards and Dulwich, watched by a crowd of 1,137, never looked likely to lose their grip on the championship trophy after that. (The celebrations are pictured by Andy Nunn.)

So the league’s longest-serving club – they have had unbroken membership since 1907 – return to the Premier for the first time since 2001 and Maidstone, their close rivals all season, will have to settle for the play-offs.

Stones attracted their, and the league’s, highest gate of the season, with 2,305 turning up at the Gallagher Stadium to see if they could snatch the title at the last gasp. They did all they could, beating Horsham 3-0, but finished a point adrift.

Stuart King’s penalty put them ahead after 33 minutes and Ade Olorunda made it 2-0 in the 63rd minute. The game had kicked off 15 minutes late because of Horsham’s travelling difficulties, so by the time Paul Booth netted the third with four minutes left Maidstone knew the title was not to come their way.

Instead, Stones will entertain Folkestone in the play-off semi-finals on Tuesday after another goal from teenager Johan Ter Horst earned them a 1-0 home win over Herne Bay while Leatherhead, who started the day in fifth place, went down to a lone Dave Botterill goal for visiting Faversham.

Ter Horst has netted some valuable goals since winning a place in the Folkestone squad, but none more vital than his seventh, two minutes after half-time, which earned the play-off spot. He later hit the bar.

A draw would not have been enough for Leatherhead and Tommy Hutchings twice went close to giving them the lead before Botterill’s 81st-minute strike ended their hopes. It was their tenth home defeat, hardly the stuff of promotion contenders although they won 14 times on the road.

It also lifted Faversham to third place and gave them home advantage in their semi-final against Hythe, who slipped below them when they could only draw 2-2 at Walton & Hersham.

Whether playing at home is actually an advantage remains to be seen: Faversham have won 14 games on foreign territory but only eight on their own turf, while Hythe have nine home wins to set against 13 away victories.

All the goals at Stompond Lane came in the second half, with Walton twice taking the lead through Tony Reid and Will Turl. Michael Yianni netted the first equaliser and Dave Cook saved a point with four minutes to go as a hailstorm peppered the ground.

It was Cook’s 27th league goal and, subject to official confirmation, gives him the division’s golden boot, pipping Sittingbourne’s Ryan Golding who failed to add to his total of 26.

Golding’s side went down 1-0 at home to Ramsgate, who had an outside chance of making the play-offs themselves if both the teams above them had slipped up.

They would, however, have needed to add seven more goals to the one netted by Ian Pulman on the stroke of half-time which spoiled the last match of Sittingbourne’s stay at Bourne Park. They move to a new ground next season.

Relegation for Walton Casuals was as certain as anything can be in football. They went into their last game at Merstham needing to make up three points and 15 goals on Three Bridges.

Mind you, if Casuals wanted evidence that the improbable can happen, they only had to look back to their home match against Merstham in November when they managed only a single point after leading 6-1 with less than half an hour to go.

There was to be no repeat of that goal feast, nor of any unlikely event. Justin Hemmings headed home a Greg Andrews cross in the 57th minute to condemn Casuals to a 1-0 defeat and end their eight-year stay in the league.

Three Bridges were beaten but never in danger of the massacre that could have endangered them. It was the 63rd minute before they fell behind to Micheal Everitt’s goal at Whitstable. Joel O’Hara replied with four minutes left but the Oystermen immediately won a penalty which James Everitt converted to give them a 2-1 win.

Tooting’s poor season ended on a high with a 4-0 victory at Crawley Down. The Anvils, who finish 13th after being play-off contenders most of the way, had to field four youth-team players.

They also had to employ goalkeeping coach Rob Frankland, who must have been somewhat embarrassed to be beaten three times in the first 16 minutes with two goals from Anthony Joseph sandwiching one by Sol Pinnock.

After that Frankland kept the Terrors at bay until the last minute, when Carl Wilson-Denis made it four.

Corinthian-Casuals and Chipstead produced a lively 1-1 draw. Bashiru Alimi gave Casuals an early lead which they held until the 77th minute, when Simon Mensah replied.

Worthing had a first half to forget as they crashed 3-0 at home to Eastbourne. Steve Metcalf’s own goal gave the visitors the lead after three minutes, Dan Smith made it 2-0 in the 25th minute and Rebels had Paul Kennett sent off before another own goal, this one from Sid Adams, completed the scoring before the interval.

 Maldon face Thamesmead in final THE Ryman North play-off final on Sunday will be between Maldon and Thamesmead after both teams won their home semi-finals tonight (Tuesday).