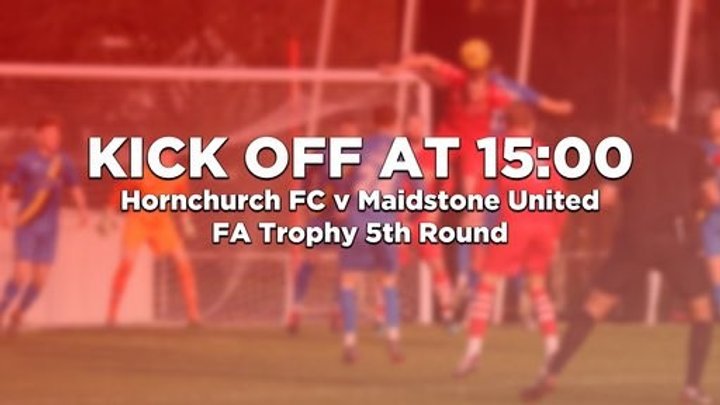 Hornchurch take on Maidstone United in the FA Trophy tomorrow- and you can watch for free!

Saturday gives us the chance of a rather rare experience- to watch a Pitching In Isthmian side play football- and Hornchurch have announced that you can watch their FA Trophy Fifth Round tie with Maidstone United for free!

The Urchins head into this match after defeating National League side Kings Lynn Town three weeks ago- the latest in a string of giantkillings. Prior to the Linnets they defeated Dulwich Hamlet, Tonbridge Angels, Bowers & Pitsea and Wingate & Finchley, and have so far scored eleven goals and conceded four. They've lost only one of their last ten in all competitions.

The opposition are in tenth place in National League South, and actually visited the Urchins for a pre-season friendly back in September, winning three-one. They defeated Dorking Wanderers and Poole Town to reach this stage of the competition, and have been a little inconsistent of late, losing two of their last three league matches- against Braintree Town and Hungerford Town.

This is the furthest the Urchins have progressed in the competition since their reformation in 2005, and indeed only once in their history have they been more successful, 2003-04, when they defeated Wingate & Finchley, Newport County, Aylesbury United, Stevenage Borough and Burton Albion, before falling to Quarter Final defeat against Hednesford Town. United reached the Quarter Final in 2018-19, and did the same in 1984-85 and 86-87.

The match can be watched on the Urchins You Tube channel, which you will find HERE.

My First XI: Leatherhead, Ryan Herrick  Ryan gives us a recent history of the Tanners when picking his First XI