It's the Quakers for the Urchins! 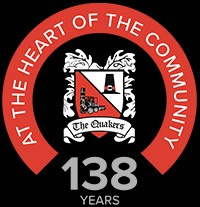 Hornchurch have been rewarded for their latest FA Trophy giantkilling by being given the chance of another- although given they are the lowest ranked side left in the competition we already knew that was going to happen! The Urchins will travel up the A1 to face Darlington in the Quarter Finals,

The full draw, which was made around an hour ago, looks like this:

Matches will be played on February 27th, with winning clubs picking up £7500 and the losing clubs also receiving £2000.

National League North Quakers defeated Wealdstone four-one on Saturday at Blackwell Meadows, and have also knocked out City of Liverpool, AFC Telford United and Weymouth. This will be the third time they've reached this stage of the competition, and they were its winners in 2011- but they've spent the majority of their existence in the professional game so this is only the eleventh time they've been eligible to take part.

The Urchins won't be daunted by the task at hand- they've already defeated three clubs at Darlington's level and one from Step One as they've cut a swathe through the competition this season.

 My First XI: Lewes FC, Stuart Fuller Lewes Chair Stuart takes us on a ramble around the Dripping Pan, and it takes around a decade!

My First XI: Grays Athletic, Glyn Jarvis  Glyn, the Vice Chairman of Grays Athletic, gives us so much detail that we considered releasing his entry as a small book! Here is his First XI, to delight Grays fans everywhere.