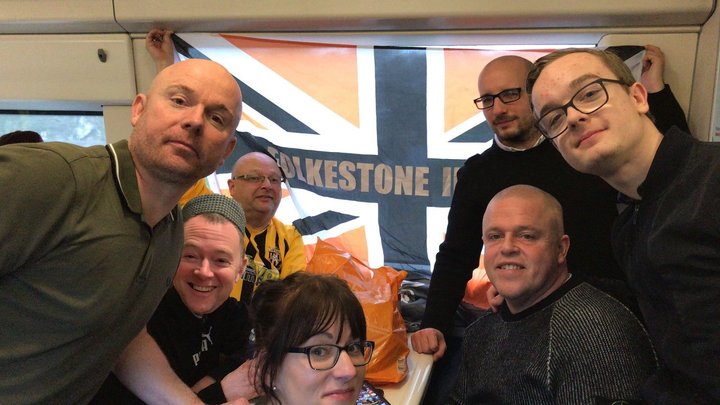 We're off to the seaside. Anthony Hassan takes us on a trip to Folkestone.

We’re back in the Pitching In Isthmian Premier, and we’re off to the seaside. Anthony Hassan tells us about the world of Folkestone Invicta.

It’s wonderful. Football without fans really is nothing and having tried to watch on TV while games take place in front of cardboard cutouts, or having been working at a few games behind closed doors, it’s a soulless experience. I wouldn’t consider it back until fans are back inside the ground and thankfully now they will be soon.

I can’t see our approach changing much but it’ll be different, probably forever. Having to wear masks on trains and not being able to eat and drink as we travel around the south east won’t be as fun, it probably won’t be as easy to nip in and out of pubs on our day out, and having to potentially sort out things like match tickets in advance will be alien to those who have paid on the gate every week for years. It won’t see me missing games and hopefully we’ll still see the numbers in attendance we did last season, from a first glance it does appear that people are chomping at the bit to get back.

Our win away at Worthing in February. We had about half a team missing for one reason or another, from a lad having his flight home delayed to another being on an obviously unfair 3 game ban with a few other injuries, so we turned up with a back 4 cobbled together like Frankenstein’s monster and attacking midfielders having to protect them and we expected to get beat and see them put one hand on the league title. The lads battled like warriors and denied them a shot on target before Ira Jackson popped up with a late winner. With the ground packed for the huge game and the dreadful weather forcing everybody under cover we were packed in tight and it was carnage when the ball dropped over the line.

The realisation the season was coming to a premature end. That was a couple of days before it was announced that games were being postponed, for me. We’d just got past Brightlingsea Regent in the league cup to reach the semi finals and were looking forward to trips to Leatherhead and Kingstonian to keep the pressure up on Worthing and Cray Wanderers in the run in, but it wasn’t to be. Otherwise the defeats in the FA cup and Trophy, a 4-0 defeat at Kings Langley was gutting as we never really turned up, while the 4-3 defeat at Maldon & Tiptree, who were undefeated in all competitions and had just beaten Layton Orient in the cup, felt like a missed opportunity to progress to a tie with Enfield who we’d just beaten in the league a week before.

Well, I hope.
It will be a struggle to replace Ira Jackson after he left for Grimsby Town but you’ve got to have faith that the manager can do it, and we’ve kept the majority of the squad that did so well last season. We’ve added Ashford’s top scorer David Smith to the side so hopefully he can give us those extra goals we need. We’ve got to be hoping for a playoff spot at least, but there’s probably more clubs thinking that than can actually do it, so somebody will have to miss out!

Those with a decent train journey are often the best: Lewes and Worthing being 2 that spring to mind, although the 1 hour trip in the other direction to Margate is fun, especially if it’s on Easter Monday. Heading to Bromley to play Cray Wanderers for the last time before they move into their own ground will be fun too, that’s always a nice place to visit and hold good memories from a 3-2 injury time win there last season. Other than that it’s those at the end of the season when hopefully there will still be a lot to play for.

Lewes. How could it not be? Even though its been terrible weather every time I’ve been its a beautiful, proper football ground. If we could play them away on the final day of the season in May that would be fantastic.

Personally I don’t consider any teams as ‘rivals’. Hythe and Dover are the most locals clubs to us but we rarely have the chance to play them competitively, although a 6-0 win away at the Crabble will never be forgotten by those that were there that night. Right now the only other Kent club in the league is Margate so obviously it’s good to take 6 points from them and finish above them.

The ground couldn’t really be any closer to Folkestone West station for those coming on public transport. The bar’s always welcoming for a drink before the game and always has some decent ale available, while the Seasider does some of the best food in the league (we get told that a lot, it’s not just me being biased!). Pray it’s not raining first half or you’ll find yourself soaked on the open terrace.

Alfie Paxman. A forward converted into a flying, goal-scoring full back who never backs down from a scrap. He’s got an engine like the high speed service from St Pancras and I’d put a decent amount on him being able to outrun it (as long as he doesn’t have to stop to pick up passengers). A close second would be Ira Jackson, he was a match winner for us over the past 18 months during a great period to be following Invicta and got people off their seat every time he got the ball. I’ll certainly be following his progress now he’s moved up to League 2 and hope he can make a real success of it.