Urchins one step from Wembley! 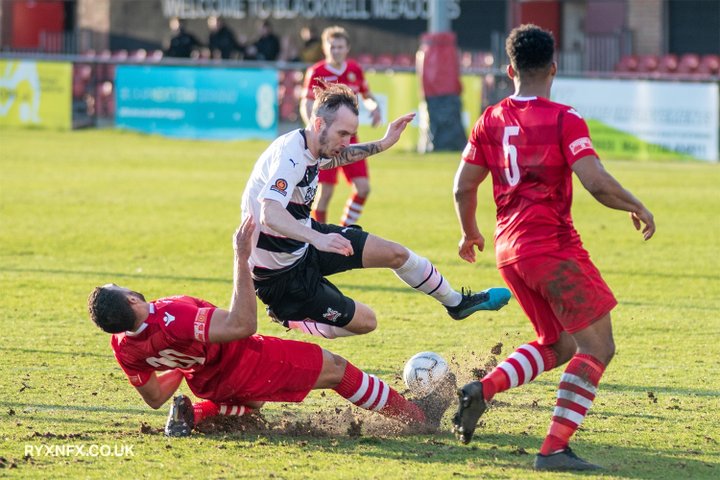 Maidstone United, Kings Lynn Town, Dulwich Hamlet, Tonbridge Angels and now Darlington! That's some list of higher-league scalps for Mark Stimson's Urchins, and it leaves them just one step from Wembley- in the Semi-Finals of the FA Trophy for the first time in their history.

Mark Stimson's Urchins had a new name in their squad with the arrival of Matt Bentley, who has moved from Basildon United until the end of the season- and end which has now been extended. He must have been buzzing to be involved, but the eleven who started the game showed only one change from the win over Maidstone United, Lewwis Spence coming in to replace Joe Christou.

Darlington had the early chances, and then Liam Nash took over. Nash had previously scored in the wins against Wingate and Finchley, Kings Lynn Town and Maidstone United- where he got an added time winner- so you'd have expected the Quakers defence to have been well aware of his abilities, but he'd already had one shot saved and when he got a second chance he took it, fed by full back Remi Sutton.

The hosts piled on the pressure, and it told just before the break, when danger man Erico Sousa grabbed the equaliser in added time. Nine minutes after the restart, however, the Urchins were ahead once more. That man Nash found himself upended in the box, and Sam Higgins kept his cool to rifle home the spot kick. Could they hold on?

They could. Darlington pressed and pressed, pinning the Urchins back, but inspired defending and goalkeeping kept the visitors ahead, and when the hosts went down to ten men six minutes from the end surely that was that? Another five minutes of added time this time came without an equaliser, and Hornchurch had made history!

Congratulations to the Urchins, who are joined in Monday's Semi-Final draw by Notts County, Hereford and Woking. You can hear it on Talksport 2 at 1.30 PM.

Manager Mark Stimson spoke to the club YouTube channel after the match, and you can watch that below: