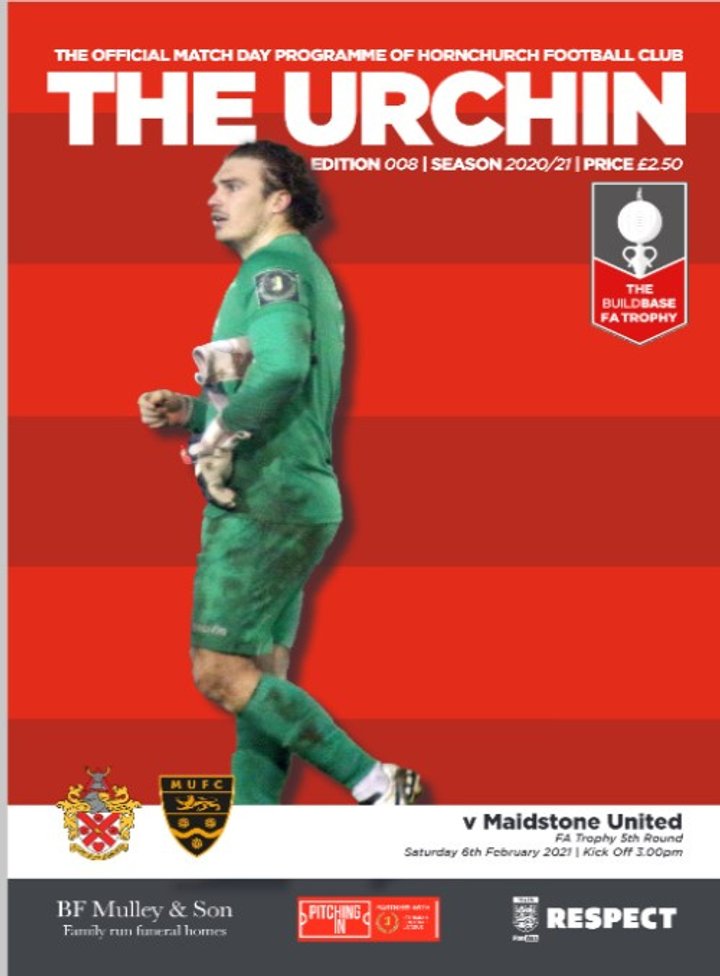 Wembley only two steps away as Hornchurch down another giant

Hornchurch yesterday added Maidstone United to a list of scalps that already included Kings Lynn Town, Dulwich Hamlet, Tonbridge Angels, Bowers & Pitsea and Wingate & Finchley, as they won a rip-roaring FA Trophy Fifth Round tie at Bridge Avenue. In a match full of drama, the winning goal- the NINTH of the afternoon- came in the seventh minute of added time, Liam Nash clipping the ball over Stones keeper Constable to record a quite astonishing five-four win, and send the club into the hat for the Quarter Final draw.

Potential opponents for the Urchins are Darlington, Notts County, Hereford, Oxford City, Torquay United, Woking, Aldershot Town and Chesterfield- the last two yet to play their Fifth Round tie, which was postponed for covid reasons.

In a match which included two own goals- one for each side- Hornchurch struck first, Sam Higgins backheeling home just before the quarter hour mark, only for the visitors to equalise two minutes later with the first of those own goals. Maidstone then went ahead just before the half hour, but it was level at the break as Ronnie Winn struck back for the hosts.

Higgins put the Urchins ahead in the fifty eighth minute- his fifth FA Trophy goal of the campaign- but again Maidstone struck back immediately, making it three-three just a minute later. It was four-three after sixty five minutes after United got on the wrong scoresheet, but again the visitors struck back to level with nineteen minutes to go- and it looked like the tie was heading to a penalty shootout when Nash stepped up to score a beauty.

Congratulations to the Urchins- and you can watch the entire match below, courtesy of Hornchurch TV.

In addition, you can read the programme here.

 My First XI: Whyteleafe, Brian Davis Brian guides us through three decades of being green.