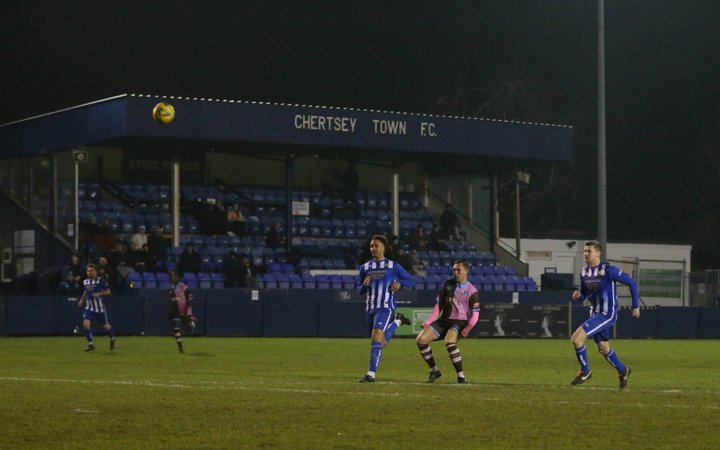 We also had wins for Cray Valley PM, Haywards Heath Town and Faversham Town as the Third Round of the Velocity Trophy continued

Corinthian-Casuals faced a potential banana skin as they travelled to Pitching In Isthmian South Central high-flyers Chertsey Town in the Velocity Trophy last night, but James Bracken's men came through the test in style, recording a four-two win.

Bobby Mills gave the visitors the lead after nineteen minutes, and it was two-nil soon afterwards, Nat Pinney doubling their advantage. Almost immediately after the restart Mills made it three, before an own goal gave the Curfews hope- but not for long, as Andrew Mills made it four with twenty one minutes remaining. A late penalty for Magnus Abisogun made it two-four, but it was Casuals who marched on.

Cray Valley PM welcomed North Division opposition as Felixstowe and Walton United arrived at the Artic Stadium. The Seasiders are in fine form, but a goal in each half saw them off, Marcel Barrington's sixteenth of the campaign before the break and another from Francis Babalola after it doing the damage.

Haywards Heath Town and Ashford United traded goals in a battle of the South East promotion contenders, before Heath came out narrowly on top after a penalty shootout. Jack Hanson gave the Nuts and Bolts an early lead only for Trevor McCreadie to quickly cancel it out, and that was that for the first half. After the break Johan Ter Horst restored the visitors lead, only for McCreadie again to intervene, but once more the visitors forged ahead, Ter Horst making it three-two with twenty minutes to go. Again Heath hit back, Sam Remfry making it three-all, and off we went to penalties, where the Sussex side triumphed five-four.

Faversham Town and Corinthian couldn't manage a goal between them, but the Lilywhites were much stronger from the spot, triumphing three-one on penalties.

Woods make it five!  Five away wins in a row for Northwood, Marlow and Uxbridge cancel each other out, and the Tangerines get back to winning ways. It's our Pitching In Isthmian South Central round up.