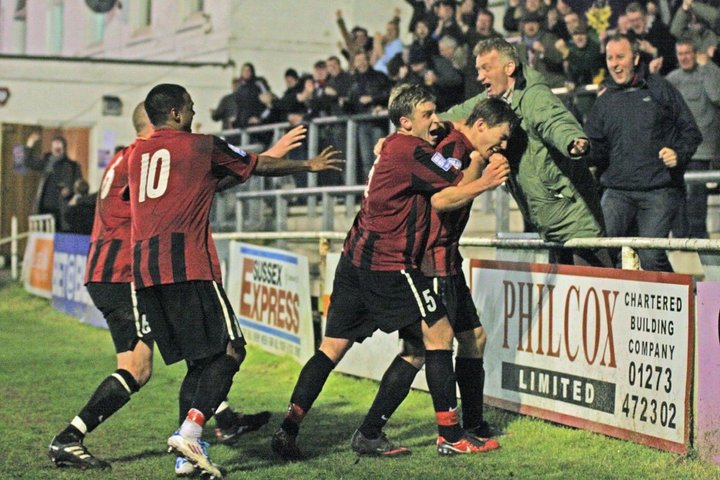 Lewes Chair Stuart takes us on a ramble around the Dripping Pan, and it takes around a decade!

I have not included any current players to stop any claims of favouritism!

Despite our relative lack of success in the last decade or so at The Pan, we have been blessed with some excellent keepers including Ricci Banks and Lewis Carey. But Chris Winterton who was between the sticks for two periods, the last of which was between 2015 and 2018 was for me the pick of the bunch. A superb shot-stopper who also had an excellent penalty saving record.

Few who were there will forget his performance away at Cray Wanderers January 2018 when his second half performance was one of the finest of any keeper in a Rooks shirt. Still had a few years left in him when he retired at the end of the 2017/18 season to concentrate on work and help his wife with their triplets.

You can still buy the t-shirt that says “I saw Steve Brinkhurst score”. Whilst there is some truth in the rumour that his Dad, Paul, bought the only one, a few of us were there at Hornchurch in October 2018 when the right-back scored in the 18th minute in the Rooks 5-1 win. It wasn’t that Brinky was a defensive player – on the contrary he was a very active part in the Rooks attacking play and in his first spells at the club he was relatively prolific, but that he lost all confidence when he got into the opposing penalty area.

Steve was released as a youngster by Brighton & Hove Albion, having spent some time on loan at The Dripping Pan in 2009/10 season, eventually joining the Rooks again on a permanent basis in 2015 at the third time of asking. He was an almost every present in the 2016/17 and 2017/18 season, forming excellent partnerships with the likes of Jamie Brotherton, Harry Reed and Ronnie Conlon. With 283 appearances for the club, he can be classed as a Lewes legend. However, he was dogged by a persistent knee injury that came to a head at Merstham in December 2018 and he was forced to quit the game the following summer.

A tough choice left-back with the likes of Matty George, Leon Redwood and Lewis Hamilton but I’ve gone with Ciardini due to his versatility and attacking flair. ‘Cards’ was one of the pre-season signings made by Steve King on his second return to the club in July 2011 in the squad that looked to bounce straight back from relegation from the National League South. In his second spell with the Rooks, a short loan deal in Autumn 2015 from Havant & Waterlooville, Ciardini scored twice in a thrilling 4-3 defeat against Leatherhead, the only game during that period the Rooks lost.

It is fair to say that the day when Frankie agreed to sign for the Rooks was the day that we realised that our promotion dreams from the Isthmian League South could become reality. Whilst we had the likes of Lloyd Cotton, Alex Malins and Stacey Freeman in the squad, the addition of Folkestone Invicta’s captain, and defensive rock made the division sit up and take Lewes seriously. In that first season, Chappell only experienced league defeat on six occasions, scoring vital goals in the second half of the season as the Rooks secured promotion with three games to spare.

Chappell was the first name on the team sheet for three seasons at The Dripping Pan as well as being an exemplary captain for the club. In his time with the club he picked up just 10 cautions, an impressive stat for a centre-half. An absolute gentlemen off the pitch who represented everything that is right about the Non-League game, Chappell left The Dripping Pan for Whitehawk last summer.

Every successful team needs their rock and that is exactly what Steve Robinson was for Lewes. He was coming to the end of his Rooks career when I arrived at The Pan, but his legend still lives on. Robinson was at the heart of the Steve King side that waltzed its way through the Isthmian League then Conference South into the Conference Premier. Blessed with speed, excellent in the air and scored his fair share of goals, Robinson returned again with King in 2011 to the Dripping Pan before playing for Whitehawk and Crawley Down Gatwick, managing the latter for a period in 2013.

There isn’t many Rooks fans who don’t look out for Wycombe Wanderers results on a Saturday to see if David Wheeler has been on the score-sheet. One of the most famous products of the Lewes Youth set up, Wheeler burst onto the scene when the Rooks found themselves in the Conference Premier in 2008. In 2009 he played for England Schoolboys at Wembley against France.

He famously missed the start of the 2010/11 season after picking up a nasty stomach virus while volunteering in Africa, which led to then manager Steve Ibbotson quipping in a post-match interview why Wheeler hadn’t been named among the substitutes for a game “would you want to sit next to him for ninety minutes?” Wheeler will forever be remembered for his goal in March 2011 against league leaders Braintree Town, with the Rooks fighting relegation that earned them three points and Wheeler a cuddle from Cynical Dave (see image, from James Boyes). David went on to Staines Town before a move to Exeter City, QPR and is now settled in the Championship for Wycombe Wanderers.

Outside of Lewes, few will ever realise the impact that Lloyd had on the Rooks when he joined the side in 2016. Whilst he was only with The Rooks for the season, he joined the club in September on the back of four Isthmian League South defeats and being knocked out of the FA Cup by Step 5 Sevenoaks Town. At the time the Rooks were perilously close to the bottom of Step 4 but Harrington’s arrival sparked an immediate response that saw them win eight of their next ten league games. Harrington’s presence in midfield, adding that necessary bite (and a fair amount of bookings) saw the Rooks go from battle relegation to challenging for the play-offs. Harrington emigrated to Australia at the end of the season for work.

Hammond joined Lewes as an 18 year old from Peacehaven & Telscombe in 2015 and was a first choice in the centre of midfield for most of that 5 year period, making almost two hundred appearances for the club and a vital part of the side that won promotion in 2018. His scoring record was also second to none, averaging a goal almost every six games from midfield and will always be remembered for his goal at Worthing in January 2019 where his effort from the half-way line set the Rooks on course for a 4-3 win. Hammo joined Eastbourne Borough last summer and has been a regular for the Step 2 side.

Nicky Wheeler was an old-fashioned winger, instantly recognisable with his long, flowing locks. A player who loved to get to the by-line, turning the full-back inside out in the process before delivering a pin-point cross.

Wheeler joined the Rooks from Burgess Hill in the summer of 2013 and was an almost ever-present in the team for two seasons, he was rarely on the score sheet, managing just eight goals in his two seasons at the club. He was a fans favourite thanks to his skills and flair, something rare in the Non-Leagues. His last game for the Rooks was the vital 2-0 at Bury Town in April 2015 to retain the club’s Isthmian League Premier status. He went on to play for Tonbridge Angels, Dagenham & Redbridge, Billericay Town, Woking, Eastbourne Borough and is now at Dorking Wanderers.

I don’t think I have seen anyone as naturally talented at the Pan as “Brothers”. He was as infuriating to watch as he was exciting, driving manager Darren Freeman to lose his voice shouting basic instructions at him on numerous occasions.

Brotherton could play up front, out wide or just behind the front man equally well. He looked deceptively older than he was but he was a player that could change a game with one touch. There won’t be many Lewes fans who wouldn’t have him in their XI from the last decade that’s for sure. He scored some spectacular goals for the club but more importantly, set up dozens more. His scoring record of a goal every three games was impressive.

Troubled by injury he hasn’t ever hit the highs that he had with the club, but even now when I am at away games, fans and officials often ask about Jamie. After leaving The Pan he turned out for Saltdean United and Haywards Heath Town.

This was a really tough call, as I have to admit my fondness for seeing Billy Medlock in his prime almost pipped the man from Bermuda. You’ll never see a more natural goal scorer in the Non-League game than Jonté, who always seemed so laid back and calm when he was playing. He scored twice on his Rooks debut in January 2016 against Canvey Island and eight more goals that season almost saw the Rooks stay up. Despite heading off to Welling United at the end of the season he was back six months later and formed a fantastic partnership with Stephen Okoh and Jamie Brotherton, scoring 13 goals and then a similar contribution the following season as part of the squad that won promotion back to the Isthmian Premier. He made his international debut whilst at Lewes in 2015 and has gone on to get 13 caps. He scored his first goal for his country in March 2016 then endured a heavily delayed and diverted journey home, via Manchester, to score for the Rooks away at Merstham.

Joined Oxford United in the transfer window in January 2018, then went onto play for Cheltenham Town where he scored a hattrick against West Ham United in a Checkatrade Trophy game. Injury and illness restricted his appearances in the professional game and he joined Woking a few weeks ago. Who knows, perhaps there will be a third coming of the legend at the Pan one day?

 Programmes and moving pictures: Woking v Ilford, 1958 We bring you video highlights of the 1958 Amateur Cup Final, along with the best of the match programme

It's the Quakers for the Urchins!  Hornchurch face a long trip up the A1 in the FA Trophy