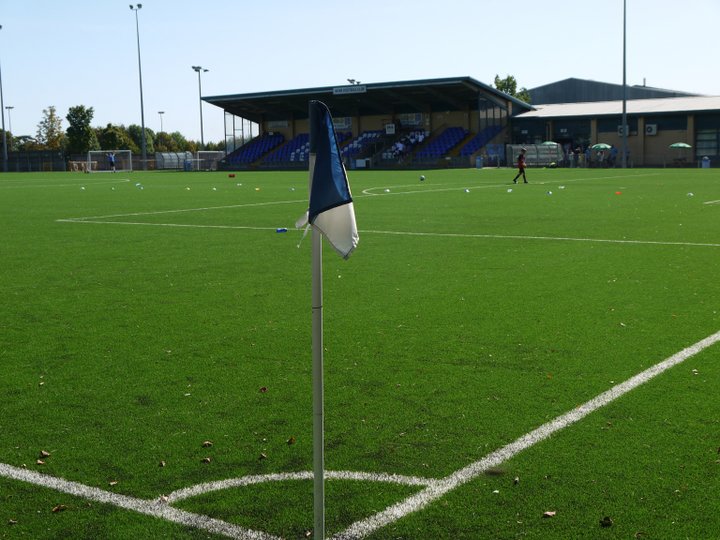 Steve brings us his story of the Blues, spanning six decades- and includes a former Editor of the Non League Paper and Glenn Hoddle’s dad!

I’m another long-term supporter and club administrator- of well over 50 years- with plenty of names to choose from, so I know my selection will leave out any number of worthy players. What I’m going for is not a well-balanced team to put into the field so much as eleven players who, for various reasons, brought something to the club and stand out for me. So here goes with a choice that is heavy on attack and light on defence to bring back particular memories from sixty years of watching Ware.

Goalkeeper: Well, there’s Luke Woods who won international honours whilst with Ware, playing in the UEFA U21 tournament for Malta. Then there’s Anthony Anstead who has moved on from our championship winning side of 2006 to TV fame but only after returning to Ware as a striker and netting two hat tricks. But my vote goes to Rhys Madden who made more appearances for the club than any keeper of recent times.

Defenders: John Webb, who became the rock in central defence that turned a good team into a great one. It was a team that won promotion within the Athenian League in 1966/7 and made it to the first round of the FA Cup in 1968/9. Our opponents in that game were Luton Town who professed an interest in John but he was just that bit too old in their estimation. Their loss was undoubtedly Ware’s gain.

Paul Messer, like John another north Herts man who joined us in 1963 as a right back and later as captain of the side that John Webb completed. 250 appearances and ten goals from a man who never put a foot wrong and was an inspiration to his team.

Stuart Hammonds, the last of my three defenders. A solid centre back but what gives him the nod over other solid centre backs? The fact is that Stuart brought a touch of morale boosting glamour thanks to his position as a senior journalist on the Non-League Paper. For so long an unfashionable club it felt as though Ware suddenly had a name that propelled them into the non-league limelight.

Midfield: Derek Hoddle, a right half in the great 1964/5 season when the glory days of the 1950s suddenly seemed to be returning. But Derek has another cause to be remembered. His young son Glenn used to come and watch his dad playing and kicked a ball around by the side of the old Buryfield pitch. As one wise head noted in the club magazine of the time, “Glenn looks as though he will be even better than his dad.”

Glen Alzapiedi. A combative midfielder with his share of red cards. Strong in the tackle Glen had started his career at Birmingham City, with whom he once had an uncompromising confrontation with Manchester United’s Norman Whiteside in the FA Youth Cup. Glen doesn’t back down easily and when he became manager and his team was failing to bring the expected results he didn’t give up. Despite nine consecutive defeats we eventually won promotion back to Step 4 and went on to FA Cup glory as well as a play-off place and county cup success, all with a predominately young team that he had nurtured.

Chris Ellerbeck. Chris once played 57 consecutive games for Ware from November 2005 to January 2007. In all he made 200 appearances for the club and scored 81 goals but it was his second in the FA Cup 4th qualifying round at home to Tonbridge Angels that I remember him for beyond all else. I had waited 39 years to see Ware get back into the competition proper and when he hit home our third goal to make it 3-1 with just a few minutes left I knew we had done it.

Forwards: Bernie Skeggs was another who made his name with Ware in the 1960s. Good with his feet he was however the best header of a ball I have seen. Power, accuracy and innovation were his hall marks and I can still picture him with his back to goal, stooping to nod a waist high cross into the net from a good twelve yards out.

The first Ware player I really remember noticing was Alf Cliss, a tricky winger from Enfield way who spent most of his playing career at Ware through the 1950s (there was a short diversion to Romford). His 417 appearances and 121 goals for the club make him the only player to appear among the top players in both categories.

Every era has its big guns, the top scorers who never seem to let you down but in relatively recent history two stand out more than anyone else. Damon Miles is our third highest scorer with 169 goals and was Isthmian League Division 2 top scorer in 1994/5. That was a title he made sure of in the last game of the season at home to Croydon. A hat trick in the opening twenty minutes was enough to bring him the title. Did we ever doubt it?

John Frendo represented the club in five out of six consecutive seasons and was top scorer each time. He also won the Isthmian League top scorer award in 2007/8 and was the highest scorer throughout Step 4 that season. In all he scored 149 goals in 196 appearances, appearances that covered all the best moments under Glen Alzapiedi’s management and made him the touchstone of that era.

If I can have a substitute it would be Brian Stockwell who was Ware born and bred and probably the man who took over Alf Cliss’s mantle as a game changing winger. His time came at the end of a period when the team always had local players and he still comes to watch his successors play. 77 goals in 265 appearances by this loyal clubman.

 Mackerel Men have half a million reasons to be happy That's the cost of Worthing's ground improvements- and as you'll see, everything looks fab!

Programmes and moving pictures: Hendon v Wealdstone, FA Amateur Cup Final, 1966  We're off to Wembley, and we bring you both excerpts from the programme and some video highlights