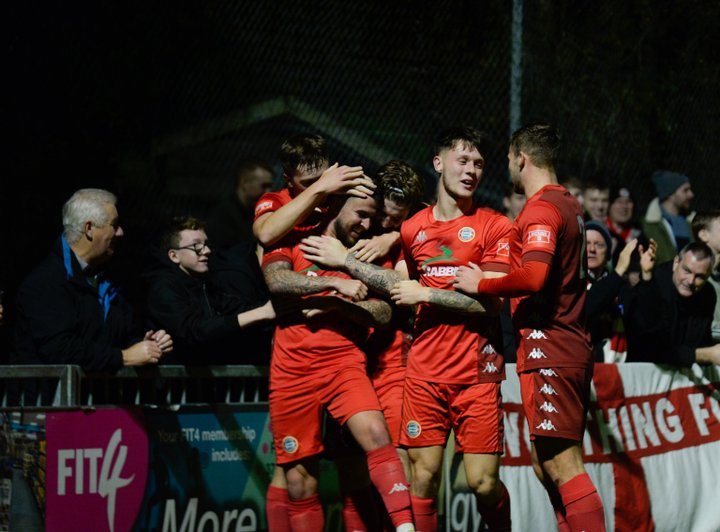 Tilbury and Whitehawk returned to form in style, Invicta stunned the Rocks, Margate and Bishop's Stortford hit the top five, and Ashford United silenced the biggest crowd of the night. It's our round up.

Worthing hit the top of the Premier Division last night with victory over Merstham- but they were made to work rather hard for the honour, as the Moatsiders weren’t prepared to roll over. The one thousand and sixty three inside the Crucial Environmental Stadium- or at least most of them- would have queued for their half time burger with a side order of trepidation, as at that point the hosts were a goal down, courtesy of John Ufuah eight minutes before the break. After the break, however, the tables turned, as Ollie Pearce equalised with his eleventh goal of the campaign, and then four minutes later Reece Myles-Meekums secured all three points. 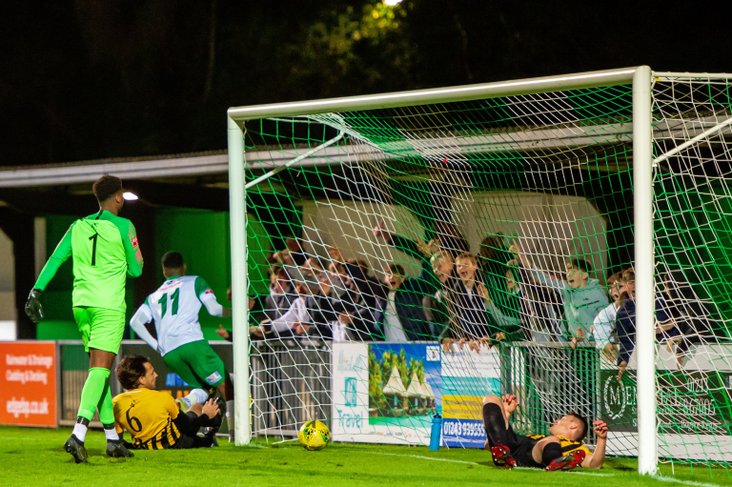 That’s seven wins and a draw from eight matches for Worthing, whilst the Merstham winning run ends- but the fine form doesn’t. Our headline image comes from Marcus Hoare.

At Nyewood Lane Bognor Regis Town welcomed Folkestone Invicta to the Sussex seaside. Invicta started the day our only unbeaten side in the Premier Division, but after seventeen minutes it didn’t look like that record would remain for much longer as they were two down, Jordy Mongoy and Harrison Brook scoring for the hosts- but then the comeback began, and what a comeback it was. Within five minutes Adam Yusuff and Jordan Wright had levelled the scores, and after the break a David Smith double sent Invicta up to thirdfour points behind Worthing but with two games in hand. Even the home fans on social media were singing the praises of the visitors after the match, and that is rather ominous for everyone else.

Take a look at Tommy McMillan's images here, and those from Martin Denyer here.

Margate were the biggest climbers, as they jumped four places to fourth with victory over East Thurrock United. Margate had won only one of the last five encounters between the two sides, that victory coming two years ago this month, but with the visitors hit for eight by Enfield Town on Saturday must have thought that they’d never get a better chance to improve those statistics. It took until twenty minutes from time for the breakthrough to arrive, Ben Greenhalgh with the opener, and Vance Bola made sure of the points with the second goal three minutes later. 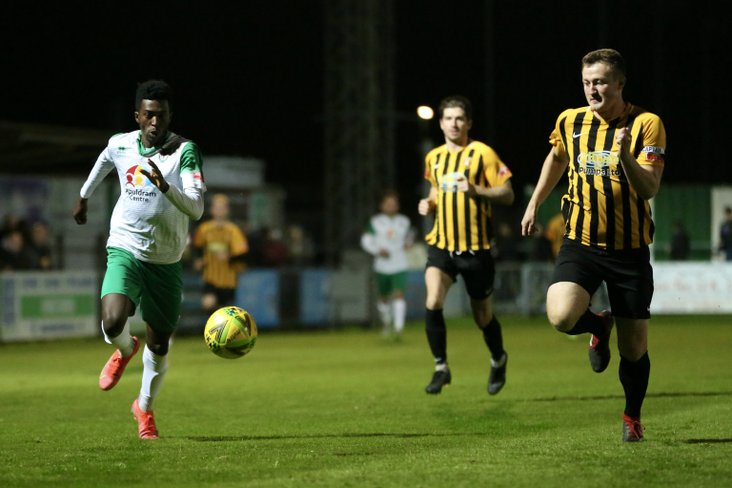 Corinthian-Casuals welcomed Bishop’s Stortford to Tolworth. The Blues were undefeated in four, and now it’s five- and they climbed to fifth with their two-nil win. Jake Cass, as usual, was their main man, getting both goals in a six minute spell towards the end of the first half, even though he only entered the fray as a substitute. That’s eleven for the season for the Stortford number nine.

Andy Nunn captured the aftermath of a Stortford goal.

Tilbury haven’t really got going this season, but will hope that after last night they can kick on to bigger and better things. They travelled to Stowmarket Town and ended a poor run of form with a comprehensive four-one victory, a Lewis Smith double, Roman Campbell and the returning Ola Ogunwamide doing the damage. Jack Ainsley got the hosts consolation from the spot. 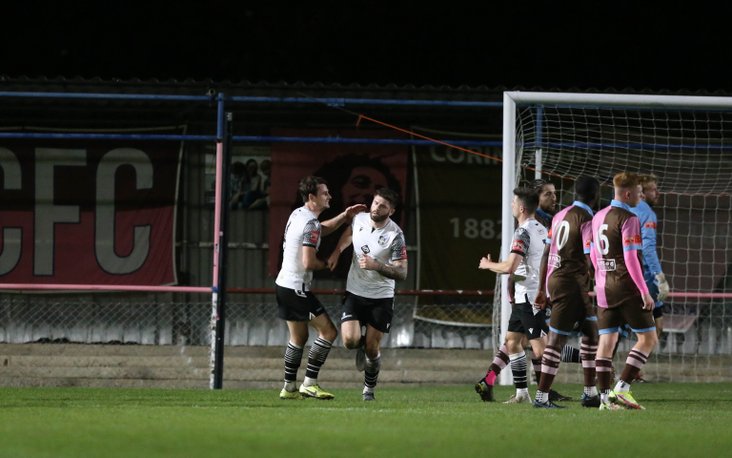 Binfield climbed back to fourth spot with a two-one win at Ashford Town. The Moles saw Josh Halmore and Callum Bunting give them a two goal half time lead, and despite an own goal giving the Tangerines a lifeline midway through the second half the visitors held on for victory.

Bracknell Town were three-nil up at Chertsey Town last night when the match was abandoned just before the end. Temi Eweka, Dave Tarpey and Daniel Bayliss had done the damage, and red cards for the hosts Kevin Maclaren and Mason Welch-Turner happened just before proceedings came to a premature halt. 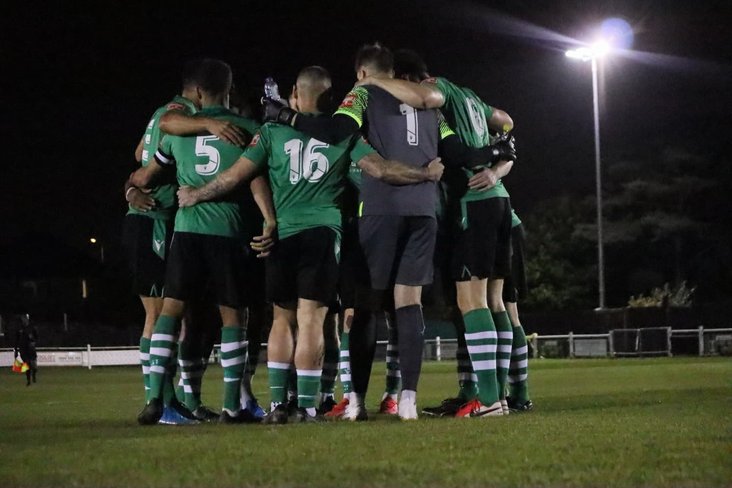 Ten of our twenty sides were in action in the South East Division, and we had a collection of fine performances and big stories.

Cray Valley PM walloped six goals past Sittingbourne at Woodstock Park on Saturday, and welcomed Hythe Town knowing that victory would send them top. Top was indeed where they ended up, and although they didn’t manage another six goal haul they did hit four- Denzel Gayle in the first half, Jack Sammoutis, Nathan Green and Marcel Barrington in the second making sure of victory. That’s ten for the season for Barrington.

The Cannons are without a win since September 14th.

Ashford United were decidedly second-favourites as they travelled to face title-favourites Hastings United, particularly given the fact that the Nuts and Bolts lost at the Pilot Field as recently as October 9th, when they departed the FA Trophy. However in front of a crowd of thirteen hundred and three the visitors did their best Simon and Garfunkel impression and created the sound of silence, coming from behind to claim a comprehensive victory. Lanre Azeez put Hastings ahead just before the break, but three goals in the last nineteen minutes left the hosts shellshocked, Tariq Ossai, Tashi-Jay Kwayie and Roberto Ratti sending travelling fans home to Homelands enraptured.

Herne Bay, in fourth, travelled to East Grinstead Town. This match was previously played on 2nd October, when it was abandoned at half time without a goal- and after ninety minutes last night the goals tally was still the same!

Corinthian, who had won three in a row, hosted Whitehawk, who had been rather woeful in the league and the opposite in knock out competitions. Perhaps one of the Hawks Ultras waved a tinfoil FA Cup instead of their keys last night, as their side finally brought their cup form to the league and scored four goals without reply. Charlie Lambert, Javaun Splatt and James Fraser made it three-nil at the break, and after the break, Splatt, that was that- four-nil and three points to Whitehawk. That’s nine for the season for the Hawks number nine.

Finally, Faversham Town travelled to Lancing. Only goal difference separated them at start of play, and it was almost the same at the end- although the draw sent the Lilywhites up a place, as Hythe Town slipped between the two on goal difference. Lancing must have thought they’d claimed all three points after Matt Daniel’s fifty second minute goal saw them still ahead three minutes from time, but D’jean Spencer thought otherwise and grabbed a late equaliser.

 Ola for Tilbury Ola Ogunwamide returns for the Dockers

It's Highlights Time!  Some of the best bits of an action-packed Saturday, on video- with goals galore!