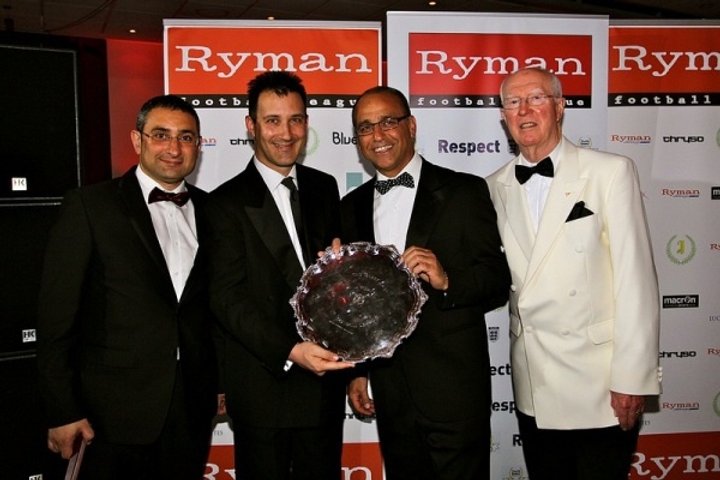 They were joined by Ryman Group chairman Theo Paphitis and many of his senior management as the group’s longstanding support for the league was reaffirmed.

Many awards were announced on the night. Fair Play winners in each division were Margate, Waltham Abbey and Dulwich Hamlet, while Respect awards went to Tooting, Leiston and, again, Dulwich.

The Macron Team Performance Awards were handed out by that company’s representative, Fabio Malipiero. The Premier winners were East Thurrock United, who reached the first round of the FA Cup and also the Alan Boon League Cup final. Redbridge’s remarkable run to the second round of the FA Cup earned them the Ryman North prize while in the South it provided yet another honour for Dulwich, recognising their achievement in preserving a clean sheet in the Respect markings for almost the whole season while mounting a strong promotion challenge. They eventually finished third and were beaten in the play-off final.

The Barry East Trophy, for special merit, went to Wealdstone, who carried the league flag into the FA Trophy semi-finals and then overcame a substantial fixture backlog to reach the Premier play-offs. Club chairman Howard Krais is pictured above receiving the award from Theo Paphitis, together with Ryman chief executive Kypros Kyprianou and League Chairman Alan Turvey (Picture courtesy of Andy Nunn).

The managers of the season were the bosses of the three champions: Craig Edwards (Billericay), Mark Morsley (Leiston) and Darren Freeman (Whitehawk).

A new idea this year was the selection of a Team of the Season for each division, selected by the votes of club managers (see separate story).

Many more pictures from the night can be found by following the link below.

 FA Youth Cup draw THE draw for the first three rounds of the FA Youth Cup has been released: 37 Ryman Youth League clubs take part and their fixtures are shown below.