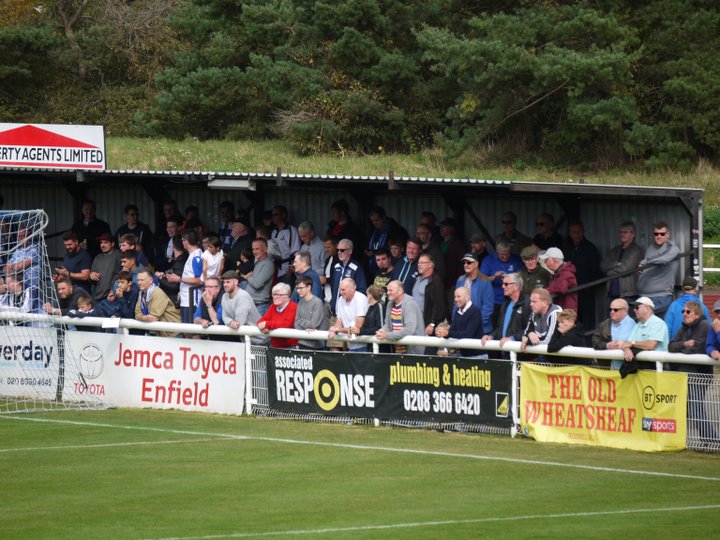 Ken Brazier doesn't give us just one moment- he provides five, as he outlines the progress that the Towners have made since their formation.

Unlike most other clubs previously featured, Enfield Town FC’s entire history can be included in any 21st century focus. This Saturday, barring a postponement, Town will play their one thousandth competitive match at Cheshunt.

Formed in June 2001 in the wake of the demise of the former Enfield FC, Town have remained supporter-owned ever since and continue to progress sustainably both on and off the field. Fans’ opinions, understandably, vary on the most memorable moments of the past 18 ½ years; here are a selection, with no claim that any of these are either exclusive or definitive!

With minimal preparation time Town kicked off their inaugural competitive season with an exciting win at Gardiners Close. Kevin Riley put Enfield Town ahead after ten minutes, but Basildon drew level in the 27th minute through a John Doyle penalty. Riley grabbed his second five minutes before the break but, midway through the second half Doyle dispatched another spot-kick for the hosts. Then, towards the end, a cross from the right found the head of substitute Brad Quinn to rise highest and power home a winner.

Town’s first manager Jim Chandler said afterwards, "It wasn't the best of performances, but we got the three points and that's what really matters. It was a bit of a culture shock for some of our lads out there and they've learnt that they can't always dwell on the ball. But at least we sent the supporters home happy and, at the end of the day, that's what it's all about".

Town clinched the Essex Senior League title for the second time in their penultimate game of the 2004-05 campaign with a 2-0 win at nearest rivals Burnham Ramblers. It was no St George's Day parade, but Town did enough with a 14th-minute header from Dean Nyman and a second-half own goal.

With so much at stake it was never going to be a classic, with only Russell Penn’s near post cross being converted by Nyman and, ten minutes after the restart, a Graeme Hall free-kick hitting a home defender's head under pressure from Kevin Riley and looping into the net providing solace. A second yellow card for skipper Rudi Hall for failing to retreat ten yards at a free-kick happened too late to impact on the result, and Town found themselves playing in Southern League Division One East in 2005-06.

Town were promoted to Step 3 for the first time after a tense single-goal victory against Needham Market at the QEII Stadium, having got past Grays Athletic on penalties in the play-off semi-finals.

Walid Matata put the home side in the driving seat when he headed the Towners in front after 17 minutes. Adam Wallace’s cross from the left found Matata to beat team-mate Liam Hope to the ball and head past keeper Liam Jones. Needham looked to have found an equaliser midway through the second half, only for Town’s narrow lead to be preserved by a raised assistant referee’s flag, and also had valid shouts for a penalty, but Steve Newing’s side held on to claim a place in the Isthmian Premier Division.

Town fans made the relatively short journey north in significant numbers for an FA Cup replay at Hitchin and were rewarded for their constant noise in support of the team as Bradley Quinton’s men came back from a goal down to deservedly claim an away tie at Chesham United in the following round. After hitting the woodwork earlier, the Canaries took the lead in the 40th minute when Jonny McNamara cut the ball back for Robbie Burns to fire home from close range.

After 65 minutes, Town got back into the game when Claudiu Vilcu managed to get his head to a high ball into the home box and, as it dropped, Harry Ottaway found himself with enough time and space to finish emphatically. With twelve minutes to go, and extra time looming, Town won the tie when Bobby Devyne squared the ball to Vilcu to fire in off the bar and cue amazing scenes.

A memorable day for Town supporters; equalling the furthest the club had progressed in the FA Cup, and a stirring performance from Andy Leese’s men seeing the visitors bridge a two-division gap and lead 2-1 with only seconds remaining. It was a tale of three penalties and two stoppage time goals at the end of each half at the Gallagher Stadium. The Stones had an excellent chance to take control of the match with just two minutes gone. After Dan Rumens had fouled Delano Sam-Yorke inside the box the referee pointed to the spot; but Zavon Hines stopped during his run up and feinted to shoot before rolling the ball past Joe Wright in the Enfield goal. The referee chalked off the “goal” and awarded an indirect free-kick to the visitors.

On twenty minutes Mickey Parcell delivered a cross from the right and Simon Thomas met it with a firm header for the opening goal of the game. With 38 minutes gone, Maidstone had a second penalty and this time Hines’ kick was legitimate, only for Wright to make a great save, flinging himself to his right. But the hosts did subsequently level through Alex Wynter’s glancing header.
The visitors were themselves awarded a penalty on 57 minutes and Darren Purse sent Lee Worgan the wrong way from the spot. And a superb rearguard action looked as though it had been enough to cause an upset but, in the fifth minute of added time, a Stones’ shot hit a post and Joe Pigott reacted quickly to convert from close range to grab a replay.

It’s all been a bit of a roller-coaster ride, and the club’s followers have been rightly proud of its overall development as it pursues it vision to be an inclusive club for all and a football and social centre for the community, with a range of teams playing at the highest sustainable levels possible.
Several awards have been received in recognition of work undertaken to support the local community. In November 2017 a 3G training facility was opened adjacent to the club’s stadium. This London Borough of Enfield project was made possible with a grant via the Football Foundation and is used primarily by the club as well as by a range of local schools and other clubs. Enfield Town FC Community Sport Development Ltd, an independent not-for-profit organisation has been formed to support community activities - currently including football schools, holiday clubs, disability football and walking football.

In the summer of 2018, the QEII Stadium hosted eight matches (including the final) of the Confederation of Independent Football Associations (CONIFA) Football World Cup. And between January 2019 and January 2020 three players – Rian McLean, Josh Davison and Muhammadu Faal – were all signed by EFL League One clubs following spells of development at Enfield Town.