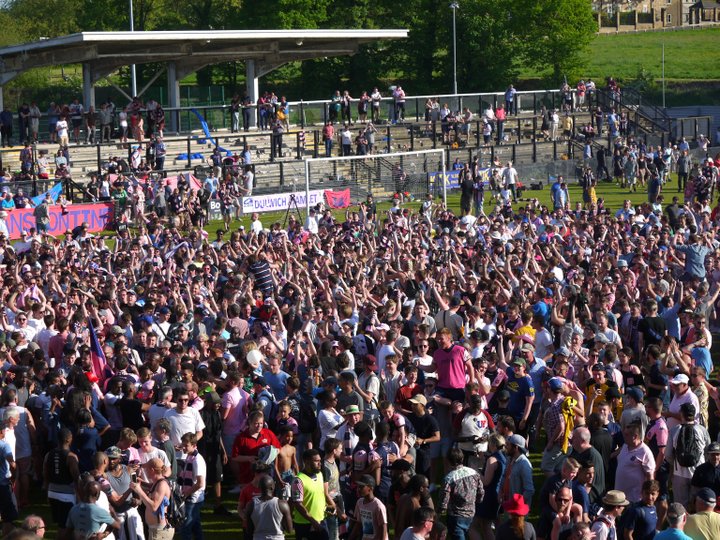 We’ve got eight days of non-stop football to go, then a small gap, then another winner-take all extravaganza that might involve a rather long trip! Here’s our guide to the Bostik League Playoffs.

It's playoff time! Here's what we have to look forward to.

On Monday evening Horsham will take on Haywards Heath Town in a Sussex derby, whilst Hastings United take on Ashford United.

Horsham and Heath have met three times this season. The Hornets came out on top at Hanbury Park in the Velocity Trophy, 5-2, but only six days later at Culver Road Heath came back from three-nil down to win an incredible match by five goals to four. The last time they met, just before Christmas, Heath made it a league double by defeating the Hornets two-nil.

Hastings and Ashford met as recently as Easter Monday, the sides playing out a 2-2 draw at Pilot Field. Hastings won their previous meeting at Homelands by two goals to nil.

Please note, the match at Culver Road will kick off slightly early, at 7.30 PM. The Final will be played at the home of the highest placed side on the evening of Friday 3rd May.

Bracknell travelled to Westfield as recently as Easter Monday, falling to a four-two defeat, but when the sides last met at Larges Lane- on New Years Day- it was the Robins who came out on top, falling behind early on but bouncing back to earn a three-one win.

Cheshunt are ten matches unbeaten, but coincidentally the last time the Ambers lost a game the victors were Marlow, who walloped them four-nil at the Alfred David Ground on 26th February. The previous match between the two sides ended in a 0-0 draw back in October.

The Final will be played at the home of the highest placed side on Saturday 4th May.

The last time the Millers and Swifts met, earlier this month at Scraley Road, Aveley came from behind to record a 2-1 victory. The Millers won the match between the two sides at Parkside too, a game in which then Swifts forward Sam Bantick, who now- of course- plays for the Millers- scored two goals as his side fell by three goals to two.

When the Jammers last entertained the Seed Growers, on 16th March, Coggeshall ran out four-one winners. This was revenge of sorts for the earlier match between the two, when Sam Bantick- yes, him again- scored for Town but was unable to stop them from slumping to a three-two home defeat.

The Final will take place on Sunday 5th, at the home of the highest placed side.

Athletic last entertained the Moatsiders on 19th January, and it was the away side who left victorious, coming from behind to record a 2-1 victory. Merstham won the other match between the two sides as well, defeating the Robins two-nil back in September. Carshalton will be hoping that this is third time lucky!

The last time Haringey Borough and Tonbridge Angels met was back in January, when a last minute Adem Ramaden goal gave Angels victory at Longmead. It was rather different when the sides competed at Coles Park, however, Borough coming out four-nil victors in November.

The Final will take place at the home of the highest placed side on Bank Holiday Monday, but sadly that won’t be that. Our winners will then take on the winners of the Southern Premier South Division Playoffs, and unless those winners are Poole Town then the likelihood is that our victors will face an away trip, as Taunton Town, Metropolitan Police and Salisbury have better points per game records than all of our Semi-Finalists.

That match will take place on Saturday May 11th.

 Get with the e-programme: Saturday 27 April 2019 For the last time this season, a round up of electronic programmes

If you can meet with triumph and disaster, and treat those two impostors both the same…  …then you obviously weren’t at a match yesterday! Here’s our round up from our final Saturday of the regular season.