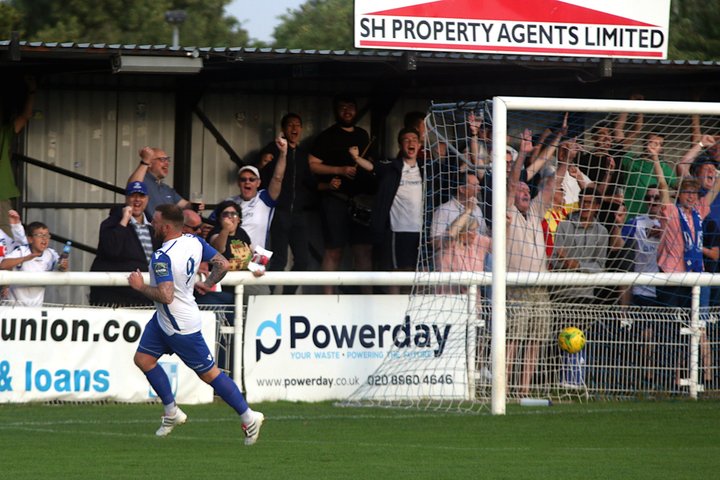 Gabriel takes us on a wander down Donkey Lane, and looks at the past and into the future of Enfield Town.

We’re back in the Pitching In Isthmian Premier, and we’re taking a trip down Donkey Lane to visit those wonderful supporter-owned folk of Enfield Town. Gabriel Meytanis is our guide.

I'm grateful the league isn't starting without the fans - without whom football is nothing, as the maxim goes - and of course from clubs' point of view it will be great to see gate receipts coming in again. I suppose it's the usual nervous excitement for the start of the season but it's certainly mixed with a little caution given the flux of the Covid situation. It's been a real joy seeing Town again pre-season (even in light of some of our results) and I know the club have taken a load of precautions to hopefully make competitive home fixtures as secure as possible.

Yes and no - as a student it's a case of trying to shoehorn as many games in as possible anyway! I still hope to attend lots of games; all being well quite a few away trips too, whilst of course following the necessary measures. It may mean slightly less time in clubhouses but I'd rather that than no game at all. Again, though, I think clubs are trying their utmost to balance accommodating regular match-goers without compromising safety: fingers crossed the experience can be as close to 'normal' as possible.

Lots to choose from there. Though we fell short of the First Round Proper again, our FA Cup run was still fantastic. I don't think you can ask for too much more than a couple of full-house games upsetting big opposition; particularly the Braintree match which will live long in the memory. We did, though, reach the First Round in the FA Trophy before bowing out to Ebbsfleet, which is the furthest we've been to date.

If I had to settle on one moment, it would probably be our opening home match in the league. We battered Bishop's Stortford 5-0, but it could've been a cricket score. It was a real statement performance at the start of the campaign and the best possible response after we'd thrown away a lead against Lewes the week before; everyone to a man played out of their skin.

Well, besides the season being cut short... likewise a few to choose from here, both in the league and cups. We still haven't ever earned an FA Cup First Round tie and after upsetting Rushden & Diamonds then Braintree we put in a pretty bizarre performance down at Chichester. A pill which became even more bitter when the victors eventually beat Bowers & Pitsea and were gifted a bye into the Second Round. Lovely to see them go that far though.

League-wise we shipped 4 goals on a few occasions: away to Hornchurch and Bognor as well as in a couple of really out-of-sorts home losses to Horsham and Bowers. The 2-0 defeat at Carshalton was particularly bad though - the epitome of absolutely everything going wrong. A fan favourite scoring against you, a harsh red card which changed the game, a tight goal ruled out, and ultimately going into a new year having lost a massive 6-pointer.

The optimist in me says comfortable play-offs, the realist says once again fighting off several others to be in contention.

Last season we improved on 10th spot from the 18/19 campaign and had a game or two in hand in 7th before it was curtailed, so if we can continue that upward trajectory (far easier said than done) and haul ourselves back into the playoffs, I'd like to think most fans would call that a pretty successful campaign. Though we've lost a couple of first-teamers and a few impact players from last year, we've added some reinforcements - some familiar faces are back too - while managing to maintain a decent core from last year's squad. Putting my neck on the line, I'm saying we'll earn ourselves a playoff spot.

It's been over half a year since we last hosted a competitive game so getting the fans back for opening day against Lewes will hopefully be a special occasion. We missed out on quite a few away trips last time out - Horsham, Haringey, and Wingate come to mind - so it'll be enjoyable to go back to each of those. Of course, it's always a bit of a magical mystery tour seeing where the cup runs take us too.

The Dripping Pan is always a favourite on the calendar. Lovely ground, lovely people, decent atmosphere and not too far from Brighton if you want a detour to the seaside. Honourable mention to Colston Avenue too, despite not being a particularly happy hunting ground at all for us Towners.

We have quite a few other clubs in the vicinity so I suppose any matches with Cheshunt, Potters Bar, Wingate & Finchley or Haringey probably have a little more edge to them, though I don't quite think it crosses over into serious rivalry. Historically there's been far more animosity with Barnet and Billericay so let's see whether we meet either in the Cup or Trophy.

There were some incredibly cheap jibes from the Haringey coaching staff after we beat them last season so I imagine they'll be up for playing us again, and Bar became the latest team to pinch a number of our first-teamers, so there'll certainly be added interest when we face them.

Grab a New River beer from the bar in the main 'CAFE' stand - its Art Deco design means our home is one of only a handful of English football stadia to be Grade II listed. Although the ground does have a running track you can still be right next to the action behind the goals at either end, and you'll always find a very decent atmosphere behind whichever one Town are kicking towards.

Also keep in mind that you're helping to support England's original fan-owned football club, which is as ever massively appreciated. If approaching from Southbury or Enfield Town stations, you can walk through the park which connects the former Enfield FC's home at Southbury Road to where Town now reside.

10. Who is your favourite player of all time (for your club)- and why?
Good question! I'm afraid I'll have to give the copout answer since picking just one is impossible. Mark Kirby is an absolute Enfield Town legend and one of the most committed players to ever wear the shirt in the 300-odd appearances that he racked up in defence - during which time he chipped in with some huge goals too. Another fan dubbed him the 'People's Centre Half' on Twitter last season and I can't think of too many more fitting descriptions; one of those players with whom Enfield Town fans share a real mutual love and appreciation.

The other player I can't fail to mention is Liam Hope. The guy is practically synonymous with ETFC and helped himself to over a century of goals across a couple of divisions on his way to becoming our record goalscorer. There were times over the years when it felt as though you could glance at the back of a local paper and almost guarantee the featured image would be Hope celebrating a goal.

I think it would also be remiss of me not to mention how wonderful it's been in recent years to watch the likes of Josh Davison and Muhammadu Faal among others go onto bigger and better things in the professional game having been magnificent for us.

Image courtesy of Phil Davison. Gabriel assures us he's in there somewhere!

If you've volunteered to answer these questions on behalf of your club, but haven't done it yet, the deadline is Wednesday. We'll have predicted tables on Thursday, Friday and Saturday