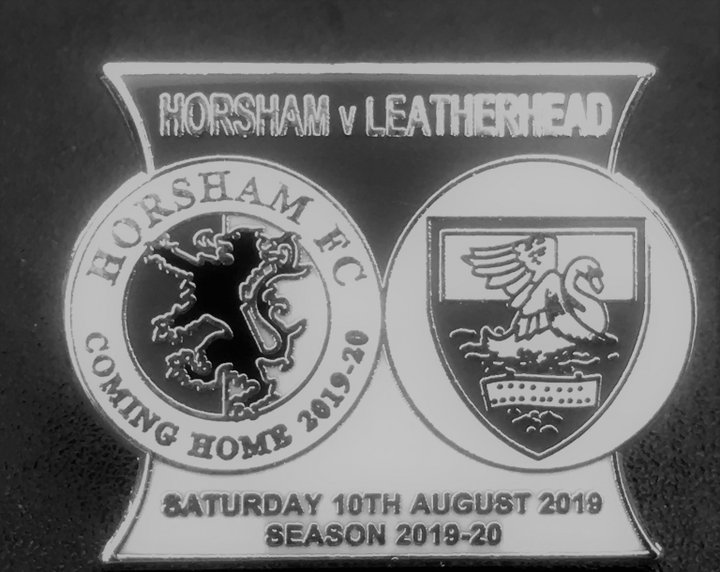 Football is back! And it brought us new grounds, new players and some surprises. It's our round up of Saturday's action.

Yesterday morning our BetVictor Isthmian Premier Division fans predicted that last season’s runners up, Carshalton Athletic, would win the title this time around- and that Potters Bar Town would end the campaign holding up the rest. Of course, as fate would have it, the two were playing against each other a few hours later, and the Scholars immediately turned that prediction on its head by despatching their visitors by two goals to nil.

That statistic doesn’t quite tell the whole story, however. Twenty seven minutes in and with the score at nil-nil, Robins keeper Billy Bishop had to go off injured. Now defender Daniel Pappoe is usually very good at stopping marauding attackers from scoring, but on this occasion he was asked to do it whilst playing the role of substitute keeper- and it didn’t quite work out for him, Bradley Sach and Josh Hutchinson managing to force the ball home after the break to earn the victory.

Athletic will look to get their first points on the board on Monday night, when they entertain our early pacesetters, East Thurrock United. The Rocks started the day by announcing the signing of former Dartford man Billy Crook, and he played a big part as they spoiled Cheshunt’s return to the big time by putting four goals past them at Rookery Hill. Alex Clark put the Rocks ahead after only five minutes, but Brian Moses walloped the Ambers level only nine minutes later. That’s how it stayed until the second half, when the home side grabbed control of the match and of all of the points, a double from Frankie Merrifield and one from Ben Marlow making it four-one and sending East Thurrock to the top of the table.

Bishop’s Stortford immediately got back into the kind of form they were displaying at the tail end of last season, defeating fellow promotion hopefuls Bognor Regis Town by three goals to one. Luke Callander put them ahead after nine minutes, before Jamie Cureton scored his customary goal just after the half hour. Ryan Charles made it three before the break, and whilst Bognor got one back from the spot with sixteen minutes to go they never really threatened to take anything from the match. Dan Smith found the net from twelve yards.

Folkestone Invicta hosted Worthing on the Kent coast in another battle between two highly-fancies sides, and it was advantage stripes as the home side grabbed two goals after the break. Jerson Dos Santos got the first in the sixty third minute, and Ira Jackson secured the points four minutes from time.

Hornchurch travelled to face a new look Merstham, last year’s playoff finalists shorn of their manager and most of their first team after Hayden Bird left for Kingstonian and took the majority of the squad with him- although striker Walter Figueira was an exception, moving to Waterford, where he made his debut in a Cup Semi-Final this week and scored. New Moatsiders manager Frank Wilson has had to rebuild his side, and even added two signings yesterday morning in Delano Sam-Yorke and Liam Smith. He saw his new charges take the lead against Hornchurch, Ellis Brown opening the scoring after twenty minutes, but the Urchins hit back after the break and goals from Lewwis Spence and Daniel Uchechi saw the points accompany them back to Essex.

Haringey Borough are another side who qualified for the playoffs last season yet faced big changes in the summer, with a number of their side moving on. They started their second Premier Division campaign against Corinthian-Casuals on White Hart Lane, and newly signed goal machine Chid Onokwai, who spent last season rattling them in for FC Romania and then Hayes and Yeading United, made it a great start by scoring the only goal of the game five minutes after the break.

The biggest crowd of the day came at the Camping World Community Stadium, where Horsham played their first competitive game in a ground of their own for more than eleven years. After a lacklustre first half hour the last two thirds of the match against Leatherhead was an entertaining and pulsating affair, and you can read more about it HERE, as it was our BetVictor Matchday feature. The match finished all square, one goal each.

Another set of Premier Division newcomers who ended the day with a point were Bowers & Pitsea. They hosted Wingate & Finchley at a new look Len Salmon, and fell behind in the first half, Olumide Oluwatimilehin firing home from all of twenty-five yards. But a team with the attacking prowess of Bowers was not going to be denied, and David Knight scored his sides first Step Three goal to equalise with twenty one minutes remaining.

We had another one-one draw at the Dripping Pan, where Stefan Ilic grabbed an equaliser for Lewes after Enfield Town looked as if they were going to escape with all three points. Ken Charles shocked most of the five hundred and ninety three in attendance, putting the Towners ahead seven minutes before the break, but the Rooks got the leveller their efforts deserved when Ilic got a debut goal six minutes from time.

Kingstonian and Cray Wanderers played out a goalless draw at King George’s Field, whilst Margate and Brightlingsea Regent did the same at Hartsdown Park.

A handful of our Step Four clubs were in FA Cup action. A double from Callum Overton and one more from Jamie Horncastle gave Chichester City a three-one win over Erith Town, whilst Josh James and Anthony Edgar sent Cray Valley PM through to the Preliminary Round in a two-one win over Chatham Town. Histon went to Desborough Town and fell behind early on, but struck back with three goals from Dan Brown (2) and Lee Smith to march on.

Chertsey Town will have to do it all again against Cobham, Lewis Driver’s goal not enough to give them victory as Cobham grabbed a late equaliser, whilst Hullbridge Sports fell to defeat as they hosted Stanway Rovers, Timothy Monsheju halving the arrears eight minutes from time but unable to prevent a 2-1 defeat.

Hornets come home!  Horsham were back in Horsham once more. Leatherhead were the visitors. A pulsating game saw honours shared.