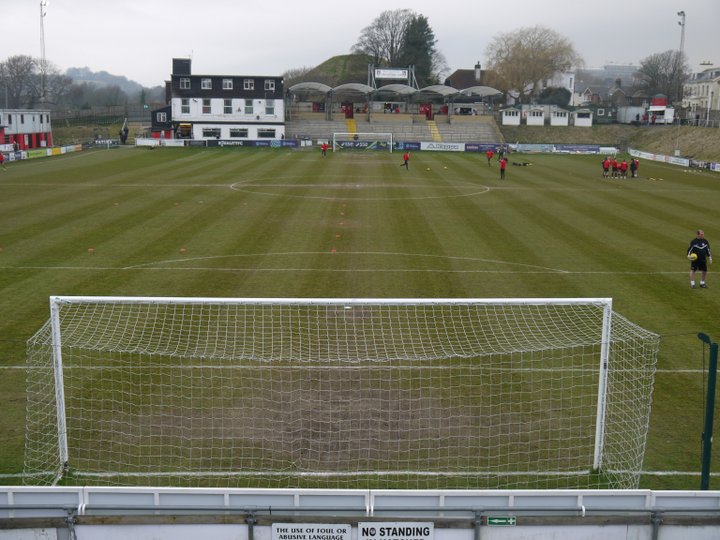 Sussex seems to be a rather generous place. So far three of our Premier Division clubs from the county have announced ambitious fundraising targets, and yesterday Lewes became the third of the trio to hit the jackpot, as their supporters put in a total of more than thirty four thousand pounds to help the club to replace their venerable floodlights, to the loud cheers of football photographers everywhere!

The money will also go towards pitch improvements, and help the Rooks to install new toilets in the bar, so not only will you be able to see more clearly on those damp midweek evenings, and not only will there be less chance of the game being called off before your eyes, but you'll spend less time queuing to rid yourself of those Harvey's Ales you were quaffing before kick off! You can still add to the total if you wish, and the link can be found here.

On the playing front now, amongst those you'll be able to have a much better view of will be Gary Noel, Christian Frimpong, Dimitri Hatzimouratis and Ross Barclay.

Gary, a former Rook from almost a decade ago, headed back to the club in February to make a second debut in their match with Worthing, but lasted only a few seconds before suffering an injury which ruled him out for the rest of the- admittedly rather brief- campaign.

Defender Christian also came in during February. He played for Bristol City as a teenager, before joining Swindon Town on a Scholarship deal. He left the County Ground in 2017, had a trial with Norwich City, but then signed for Braintree Town before heading to the Dripping Pan. He can play as a centre back or as a full back.

Dimitri made his debut a week before that Worthing match, in a goalless draw with Hornchurch. He went on to score what proved to be the winner in the last match of the season against Haringey Borough. He previously played in Australia, for Western Suburbs, Bentleigh Greens and Pascoe Vale amongst others, and moved to the Rooks from Welling United.

Ross came through the youth setup, playing for the Under 18's and Development Squad and also spending some time on loan at Saltdean United. He made three first team appearances last season, and added another eight during a loan spell at East Grinstead Town.

Read more on the signings by heading here.

Jake is back for Regent  Clowsley stays at the seaside