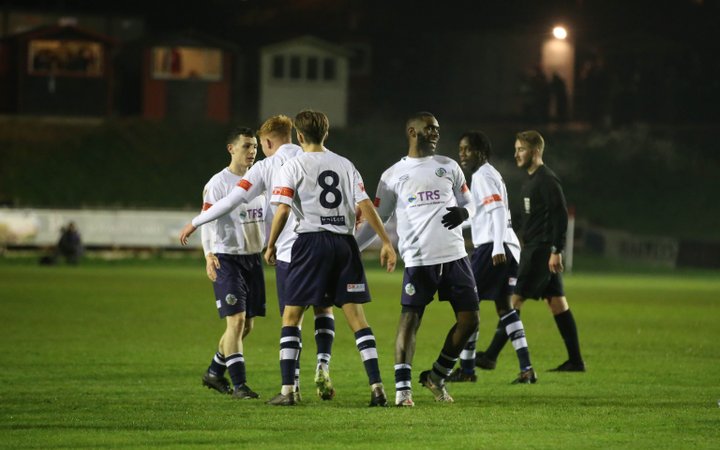 Our round up of a busy Tuesday night

Enfield Town closed the gap on leaders Worthing when a late Sam Youngs winner gave them a two-one victory over Hornchurch. Mo Faal’s eighteenth goal of the season (in twenty two matches) have the hosts an early lead, before Chidubem Onokwai (transfer story shortly) scored for the Urchins, just over a month since he scored against them for Leatherhead. A point each seemed the likely outcome until Youngs stepped up to be the hero, his first goal of the campaign coming at exactly the right time. Only two points now separate the Mackerel Men and the Towners at the top. 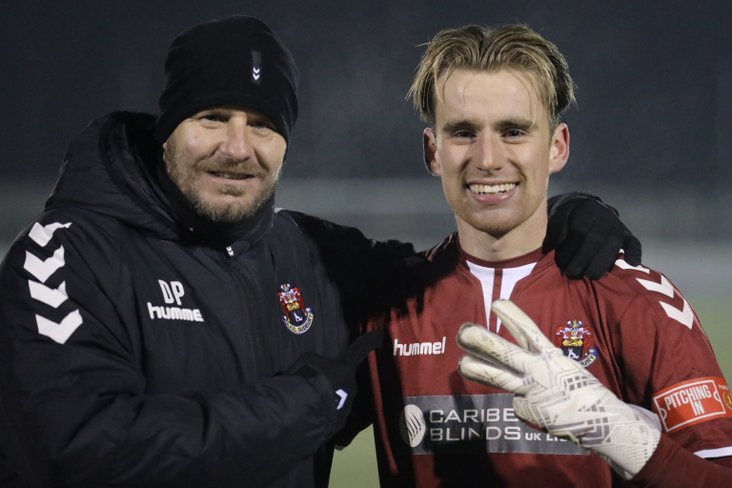 Four points behind in third place sit Cheshunt, courtesy of a fine Adam Crowther hat trick. It isn’t often that a defender gets to take home the match ball (perhaps we should start giving them out for three consecutive clean sheets?), but Adam deserved his glory last night, as he inspired the Ambers to come from behind with goals in the forty fifth, fifty first and sixty sixth minutes after Dylan Kearney’s early opener for hosts Wingate & Finchley.

Third place had been in the possession of Lewes, and it looked like it would stay that way after Joe Taylor gave them an early lead at home to Corinthian-Casuals- his sixteenth of the season. Casuals had other ideas, however, and a spirited second half comeback saw them score not just one but two, Kieron Cadogen four minutes after the restart and Warren Mfula twelve minutes later earning three points for James Bracken’s men. That’s ten points from twelve for Casuals, and eleven goals for the season for Mfula. Headline image: Andy Nunn.

Casuals are tenth, and two points and two places behind them with two games in hand are Potters Bar Town, two-nil winners over Bowers & Pitsea. Samson Esan on the stroke of half time and Ben Ward Cochrane five minutes from time did the damage- that’s double figures for Ben. Bowers remain seventeenth. 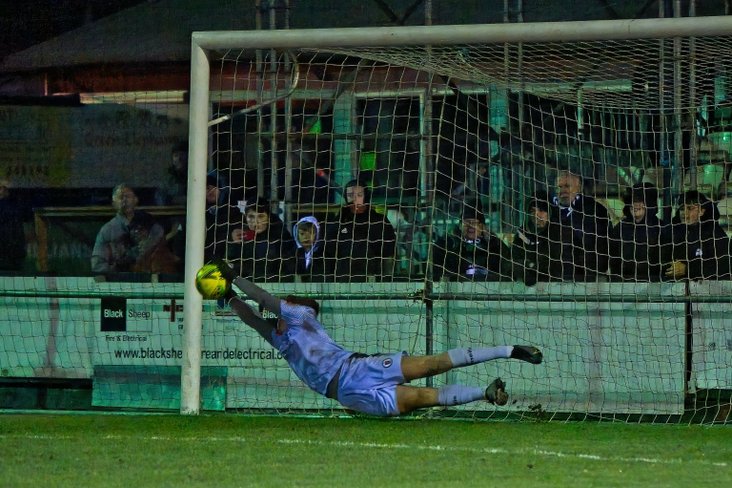 Canvey Island went into last night’s match at Basildon United having won their previous seven, and now it’s eight wins in a row in all competitions- although the Bees pushed them hard last night. Matt Price’s eighteenth of the season put the Gulls ahead early on, but on sixty six minutes Fahad Nyanja equalised for the hosts. It was a wake up call for the visitors, who responded when Evans Kouassi for his fifteenth of the campaign with thirteen minutes left- and despite Basildon’s best efforts the equaliser wouldn’t come.

Bedfont Sports, who haven’t lost a league match since September 11th, continued their fine run at Chalfont St Peter last night. Lewis Flatman made the breakthrough for the visitors midway through the first half, and a red card for Saints Panny Boxer just before the break delivered another boost. The second goal was a long time in arriving, but it duly came ten minutes from time, and it came to Charlie Postance, on from the bench. Sports are third, seven points off the top with a game in hand.

Two places and two points behind them, although with an additional game in hand, are Chertsey Town, who continued to climb the table and continued Tooting & Mitcham United’s terrible run with victory at Imperial Fields. Jake Baxter’s twelfth of the season put the Curfews ahead on twenty four minutes, and although Dan Williams struck back for the Terrors four minutes later the lead was restored six minutes from time, Sam Murphy with the second for Town, and that was that so far as goals were concerned. Tooting are thirteenth.

Victory over Thatcham Town could have sent Binfield back into the top five, but instead they had to settle for a point. The visiting Kingfishers will be disappointed as they were ahead twice, first Lamin Ceesey and then Harry Harvey putting them in front, with Josh Helmore and Jamie McClurg with the equalisers for the Moles.

Chipstead and Ashford Town also had to settle for a point each, Aaron McLeish-White opening the scoring for the Tangerines just before the hour only for Raheem Sterling-Parker to earn a draw for the hosts thirteen minutes later.

Hastings United moved to within one point of the top five with victory over Sittingbourne, but they had to come from behind to do it. Duane Ofori-Acheampong gave the Brickies the lead midway through the first half, causing the visiting fan with the air horn to upset the neighbours around Pilot Field by making a loud “parp,” but he was silenced (albeit temporarily) when teammate Marvin Hamilton-Omole saw red soon afterwards. The ten men held out until just after half time when Tom Chalmers (no relation to Judith) equalised, and right at the end Jack Dixon grabbed the three points for the hosts, who welcomed seven hundred and thirty four to Pilot Field and sent most of them home happy, if a little cold.

We had five Velocity Trophy First Round matches last night, and four shootouts, so we’ll start with the one which didn’t need penalties- and it really didn’t need them, as Herne Bay crushed East Grinstead Town by six goals to one. Zak Ansah, Rory Smith (2), Laurence Harvey (2) and Aaron Millbank hit the net for the hosts, whilst Henry Mark (or perhaps Harry, seeing as he’s named both ways on Football Web Pages) scored for the Wasps.

Right, on to shootout drama. Chichester City v Hanwell Town couldn’t find a goal, and the shootout was hardly goal laden either, given City won that three-one. Coggeshall Town and AFC Sudbury shared four goals, Jermain Francis and Alex Teniola scoring for the Seed Growers, Colby Hillyard and Christian Frimpong for the yellows. It was the visitors who triumphed in the shootout, also by three goals to one- a shootout which featured three saves from James Askew, pictured courtesy of Steve Screech. Surely that gets him a match ball?!

Burgess Hill Town scored at both ends in their match with Uxbridge, an own goal giving the visitors the lead only for Reggie Ward to equalise late on for the Hillians. The hosts then went on to triumph in the shootout, five-four, which means they’ve now defeated both of our South Central top two this season.

Another five-four shootout win came at Felixstowe, where the Seasiders eventually triumphed over Witham Town. An opening goal came in the twenty eighth minute for Sam Ford, who scored for the hosts, only for Nigel Aris to equalise for the visitors just a minute later. And that was that, until the lottery at the end. Keeper Taylor Seymour was the Hillians hero, and his winning save is captured by Chris Neal.

Our one Second Round match saw Tilbury host Brentwood Town, and the visitors made it NINE consecutive wins with two first half goals, Daniel Ogunleye and Matt Cripps scoring on four and fourteen minutes. That was that.