Five get rather excited 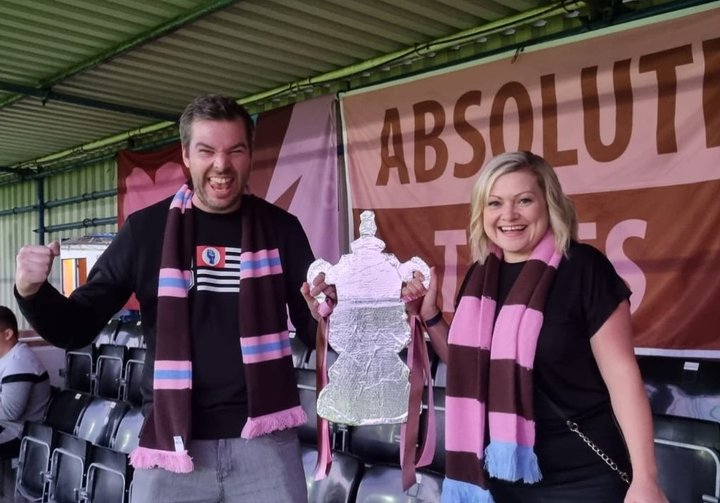 Nine of our clubs competed in FA Cup Replays last night, and we already knew that only a maximum of six could go through. Five of them managed it- and here’s what happened.

Five more of our clubs have made it through to the Third Qualifying Round of the FA Cup after replays last night. Here's how it happened.

Corinthian-Casuals welcomed Leatherhead to Tolworth after the goalless draw at the weekend, and after ninety minutes of the tie with no goals it took only nine minutes for one tonight, the hosts taking the lead through Kieron Cadogan. It took quite a lot longer for the next goal, but again that came to Casuals, Elliott Bolton getting it thirteen minutes from time. Warren Mfula made it three just before the end, and Wingate and Finchley will travel to King George’s Field in the next round.

Our headline image comes from Casuals, we suspect the work of Stuart or Andy.

Enfield Town got the first goal of the evening at Spartan South Midlands Hadley, Muhammadu Faal doing what he does best and putting them ahead after only three minutes. They got the second goal, too, sixteen minutes from time through Jeremiah Gyebi, and they needed that cushion as the hosts pulled one back four minutes later- but that was the end of the scoring, and the Towners head to Chelmsford City in the next round.

Horsham and Kingstonian battled to host Eastbourne Borough in the next round, and it was the Hornets who stung first, Shamir Fenelon opening the scoring on twenty five minutes. That turned out to be the only goal of the game, and the Hornets will have a Sussex derby to look forward to.

Needham Market and East Thurrock United knew that victory would mean a trip to Boston United- and our Rocks made the first impression, Johnny Ashman scoring eight minutes before the break. In case their first impression wasn’t strong enough, they made a second six minutes later, Ben Wyss with his second of the season. The Marketmen pulled one back ten minutes after the break, and then- woe, woe and thrice woe- got the equaliser ten minutes after that. Were we heading to extra time? Alex Hernandez made sure we weren’t, firing home from the spot seven minutes from time to give the Rocks victory.

Stowmarket Town and AFC Sudbury met again, the winners knowing that Cheshunt were waiting. They’d already gone ninety minutes without a goal, and another ninety went the same way, and then, right as we were about to head to extra time, Romario Dunne popped up to take victory for the visiting yellows.

Jersey Bulls were entertaining Sutton Common Rovers, only it was the other way around as the match was switched to Sutton. Rovers were quickest out of the blocks, Ryan Dacres-Smith scoring on twenty five minutes, but by half time supremacy had been wrested away from our side as Bulls had grabbed two goals of their own. The first goal of the second period also went to the side from the Channel Islands, and although Brendan Murphy-McVey narrowed the gap thirteen minutes from time a red card- and then another- just before the end ended their challenge.

Bulls will entertain Chertsey Town in the next round.

 Holy Moses! Brian off to Maldon Tilbury forward Brian Moses signs on for the Jammers