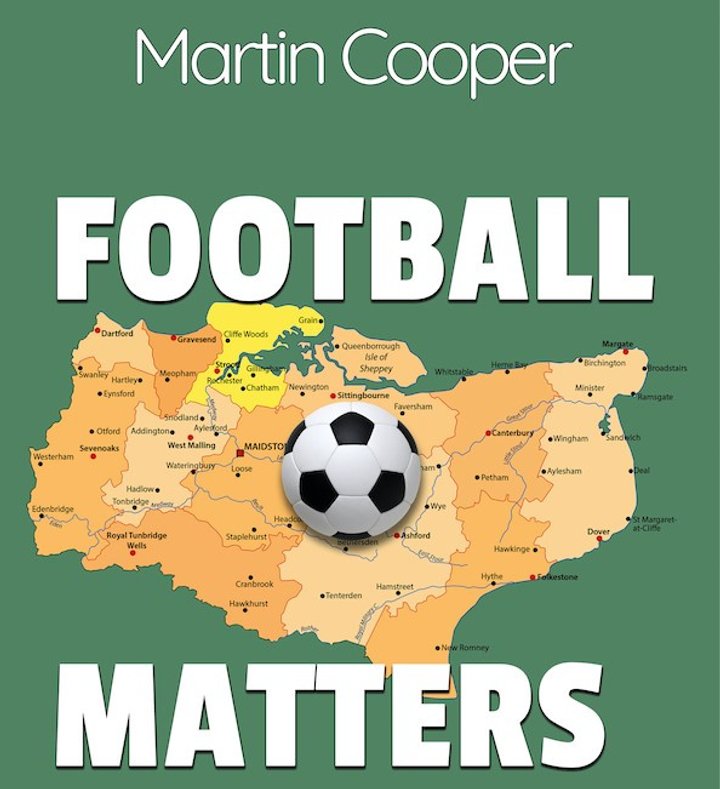 When journalist Martin Cooper set off to record his journey through a Kentish football season, little did he realise that he’d end up documenting the season that wasn’t. We caught up with him to talk about his book, Football Matters.

Journalist Martin Cooper is a West Ham United supporter, but we won’t hold that against him. In the summer of 2019 he decided to find out more about the world away from that athletics stadium in East London, and travel around the garden of England- Kent being his home county- experiencing the Non League scene for the first time. He has since gathered his thoughts in a book, entitled ‘Football Matters,’ which includes visits to Whitstable Town, Sittingbourne, Folkestone Invicta, VCD Athletic, Ashford United and Margate. We caught up with him to ask which was better- League or Non League. Yes, we already know the answer, but it’s nice to hear it from somebody else!

How did ‘Football Matters’ come about?

Non League football was always on my radar, but I’d never really watched much of it until last season. I’d made a few trips to watch my local club, Maidstone United, as they climbed from the Isthmian League to the National League, but I decided that I wanted to broaden my horizons; to attempt a Kentish football odyssey. So last summer I began a project to document a season of Kentish football with the idea of focusing mainly on Steps One to Four, of course never imagining that the season would end the way it did.

You covered a number of our sides on your travels, with a collection of derby matches taking centre stage. How did you decide where to go- was there a calculated plan?

It was mainly ad-hoc. I picked a few clubs I wanted to visit, including Margate and Whitstable Town, and I wanted to watch as many local derbies as possible, but to some extent I made decisions only a short time in advance. It’s a shorter book that I’d planned, as of course we had a shorter season than anyone planned. It would have finished on a positive note with the Playoffs, had we had any. I started with Ebbsfleet United versus Notts County and followed that almost immediately with Whitstable Town versus Herne Bay, and once I got up and running it became really easy to continue. All of the grounds I visited were new to me, and it was a very enjoyable experience- to the extent that I already have a follow-up book in the pipeline.

It was, for someone who generally watches the Premier League- I’m a season ticket holder- like going back in time. Being able to stand, sit where I wanted, move around the ground, wander around with a pint in my hand, mix with both sets of supporters without even the merest hint of aggravation; it was a collection of affordable, family friendly football experiences and thoroughly enjoyable.

Which of the matches you watched was the most entertaining?

I particularly enjoyed Whitstable Town versus Herne Bay on August Bank Holiday Monday (Herne Bay supporters of a nervous disposition may wish to look away now!). The hosts won three-nil, there were five hundred and thirty two in the ground and perhaps half of them were away fans- Bay is only five miles down the road- and it was a proper local derby. A great atmosphere, some excellent football, hotly contested, noisy and lots of fun. It really made me want to watch more Isthmian football.

From those you visited, did you have a favourite ground?

I liked them all. I suppose, if I was pushed, my favourite would be Folkestone Invicta. That’s such a big ground, it looks like it’s suitable for a significantly higher level, and if the old stand that used to adorn the open terrace along the far touchline hadn’t blown away it would undoubtedly resemble the kind of ground you’d see in League Two. Folkestone FC actually applied for Football League status back in the 1930’s whilst in that very stadium, being turned down repeatedly. Even for a midweek local cup match it attracted a big crowd who made a lot of noise.

Which set of supporters made the biggest impression on you?

That’s a difficult one, but perhaps the inhabitants of Blakey’s Garden Shed at Sittingbourne! It isn’t the biggest of structures but goodness, they make an incredible amount of noise! I was really impressed with they way they support their club- and I really liked the club. They’ve been through so much adversity, they had a much bigger town centre ground and were higher up the pyramid, and have ended up in an out of town science park, but there’s a great deal of loyalty towards the club both on the terraces and in the boardroom. The ‘Shed’ came from the former ground, and hopefully they’ll have a new ground soon if reports are correct- I hope so, they deserve it. Whether they’ll be able to put the shed in it, who knows.

You met a number of notable Isthmians on your travels, and they make an appearance in your book. Doug Smith from Herne Bay, Peter Pitts at Sittingbourne, Martin Giles from Hythe, Brian Norris at VCD Athletic, Derek Prestridge and Don Crosbie at Ashford United, Terry Scott at Margate. What did you take from those experiences?

Everyone at each of the clubs was helpful and accommodating, willing to talk, willing to help. It was really impressive, and everyone was so friendly, too. I suppose what really came across was that all of these people are real football fans, and incredibly loyal to their clubs- and that even the club officials on that list are volunteers, many of whom have to wear several hats and take on several jobs. They do it for the love of the game, and for the love of their club- there’s little glory and no cash, and yet for years on end they turn up, they support, and they take real pride in what they do, even when things might not be going particularly well on the pitch.

How did you feel when circumstances forced you to write a rather different book from the one you had originally planned?

It was a shame. When the season started we didn’t even know what Covid-19 was, but I suppose it made the campaign-and the book- somewhat unique. It was disappointing, but it gave me rather a different story and a rather different ending.

So which is better? League or Non-League?

That’s a leading question! Both have their merits. I suppose if you want to see the best players in the world you go to watch the Premier League, but if you want to have a proper, traditional, football experience then you need to watch the Non League game. As a West Ham fan I get rather sick of the money and the razzmatazz of the top level, so I’d heartily recommend the Non League game to top level supporters- even if they’re just adopting a local side as their second team. Locals in Kent tend to gravitate towards the London sides which perhaps they or their parents supported, but price-wise the Non League game is a very attractive alternative, and from a family perspective a great way to introduce children to football.

Martin’s book, Football Matters, is published by Michael Terence Publishing and available in Kentish bookshops- when you can get into a bookshop- and online HERE.