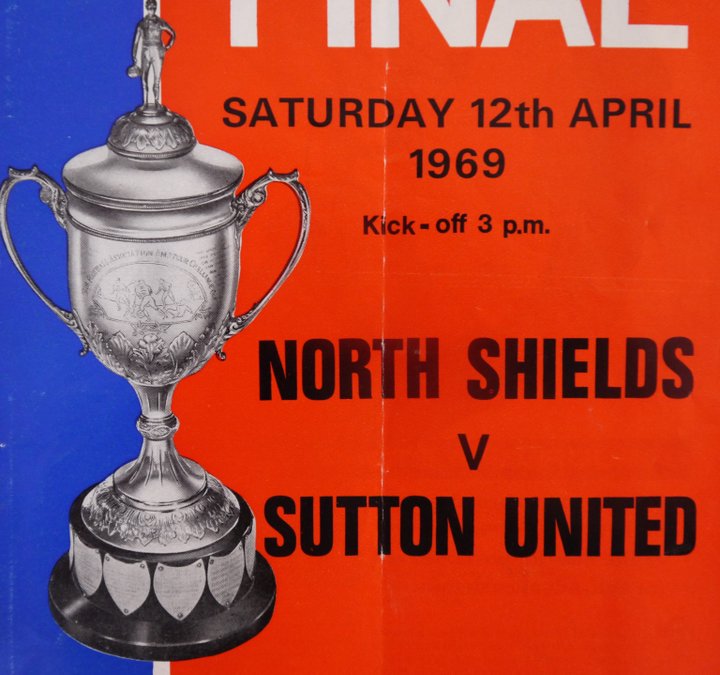 We go back to the sixties, and follow Sutton United to Wembley, where they took on North Shields

Nineteen Sixty-Nine was a momentous year in British history. Amongst the notable events, The Beatles played for the last time, Ford launched the Capri (furry dice optional), and Lulu won Eurovision. The first Concorde flew, Raleigh released their “Chopper” bicycle- surely still an object of desire for every boy of a certain age- the Austin Maxi trundled off the production line at British Leyland (contrary to reports, it didn’t immediately break down- that came later), The Who introduced us to Tommy, Monty Python hit our TV screens- nobody expected that, nor the Spanish Inquisition- and Neil Armstrong took his first steps on the moon.

Lots of miserable things happened too, but after the year we’ve just had we don’t need to read about any of those, so let’s focus on the more mundane. 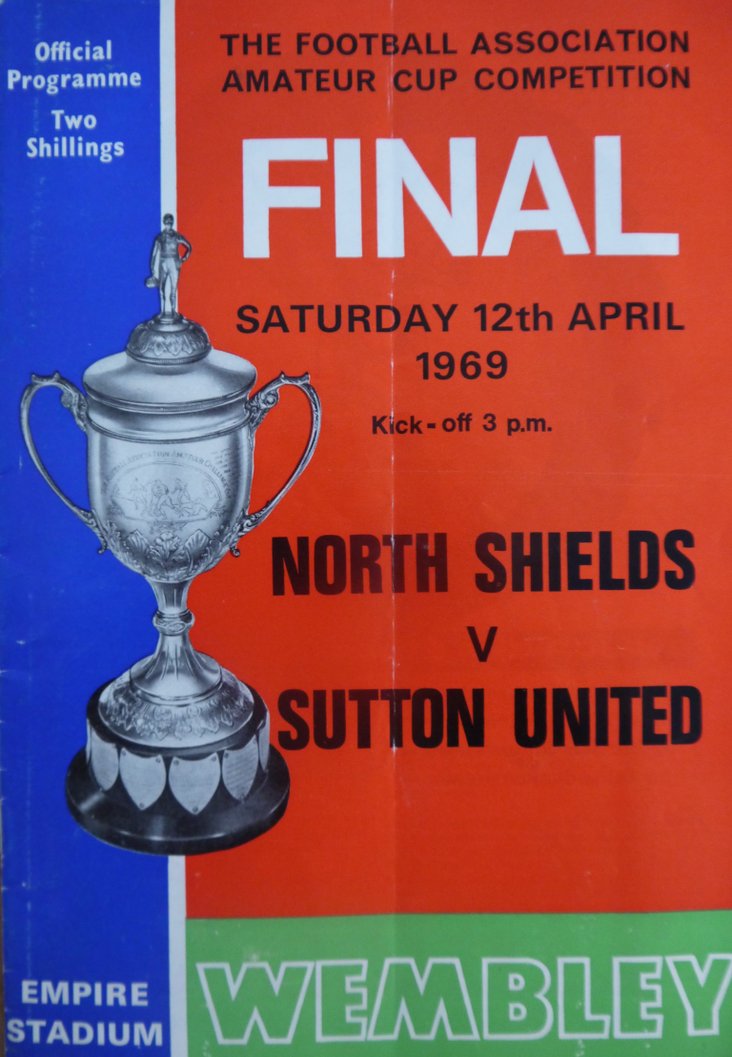 It was the second time that the side from Gander Green Lane had reached the final, as in 1962 they’d been bested by local rivals Wimbledon in front of forty five thousand, the Dons taking an Isthmian League and Amateur Cup double. Managed by former Manchester City and Charlton Athletic full back Sid Cann, who had gone on to manage Southampton and Wycombe Wanderers before moving to Surrey, perhaps this would be second time lucky? Not to spoil the story, but it wasn’t- and indeed Wembley has proved something of a hoodoo ground for United, who have reached the Amateur Cup Final twice and the FA Trophy Final once, losing each time.

United route to the Final saw them wallop Bromley by nine goals to nil at home, defeat Leeds & Carnegie five-two away, and then defeat Marine two-nil at home. In the Quarter Finals they took on Isthmian League rivals Leytonstone and defeated them three-nil, whilst the Semi-Final, against Shields’ closest rivals for the Northern League title, Whitley Bay, they’d run out four-two winners in a match played at Birmingham City’s St Andrews. Striker Peter Drabwell had scored in every round, despite only joining the club five months previously, and went into the match with seven cup goals to his name. Teammates Mick Mellows and Terry Howard had four each.

Shields had been rather less prolific, and required two replays on the way to Wembley. Spennymoor had been defeated four-one in the First Round, Coventry Amateurs three-nil in the Second, before they came up against their first Isthmian League side, Hendon. After a one-one draw in the North East they made the trip to North London and won two-nil, before another Isthmian side, Wealdstone, awaited them in the Quarter Final. A single goal secured their passage to a Semi-Final against Skelmersdale, of the Cheshire County League. Skelmersdale were to go on to win the competition two years later, and they fought hard on this occasion, drawing one-one at Middlesbrough’s Ayresome Park before being overcome by two goals to one in the replay, which for some reason was played at Southport. Skelmersdale were ahead for most of the original tie.

Sutton United lined up for the Final as follows: 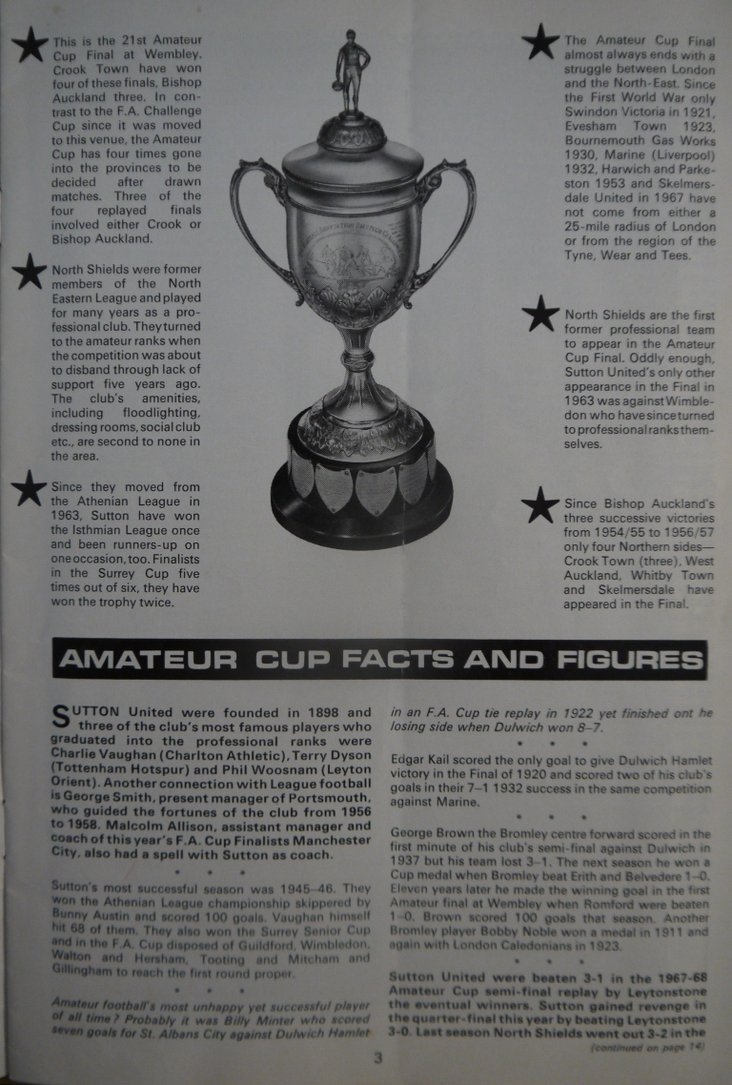 A couple of those names stand out. Brian Joicey went on to have a professional career with Coventry City, Sheffield Wednesday and Barnsley; whilst Dario Gradi went on to manage Sutton United, Wimbledon and Crewe Alexandra. 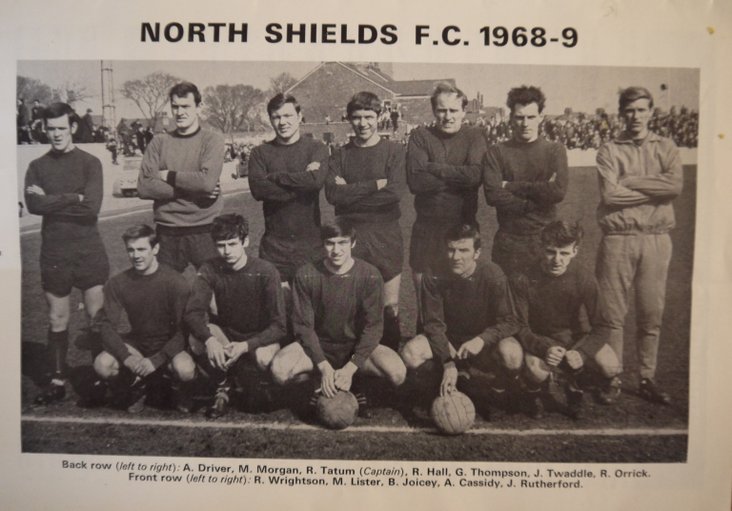 North Shields were welcomed to Wembley by a man who knew it well, former Newcastle United striker- and three times FA Cup Winner- Jackie Milburn, who was working for the News of the World as a reporter. Milburn had played alongside Shields manager, Frank Brennan, in two of those triumphs- and of course both men had also played at the stadium for England.

The pitch was in better condition than perhaps it might have been, given it had been used for the Horse of the Year Show just a week earlier, and that part if it was apparently being painted green the night before the game! United were quickly head, Mellows scoring after four minutes, and only inspired goalkeeping from Morgan held them at bay. Shields made a change, and it was an important one, as substitute Tommy Orrick created goals for Hall and Joicey and turned the match on its head. 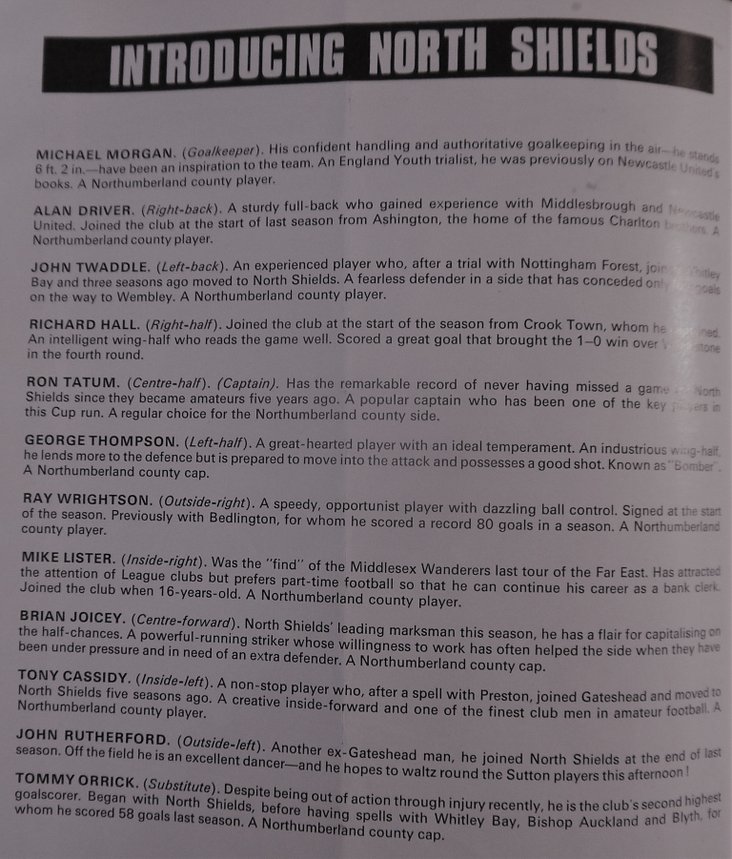 United finished the campaign in third place in the Isthmian League, behind champions Enfield and runners up Hitchin Town. Shields clinched a League and Cup double- the most successful season in their history.

The programme cost two shillings, and has only sixteen pages including the front and back covers, so we’ve included most of it- minus the adverts for Bovril, Double Diamond, and a popular brand of cigarettes. 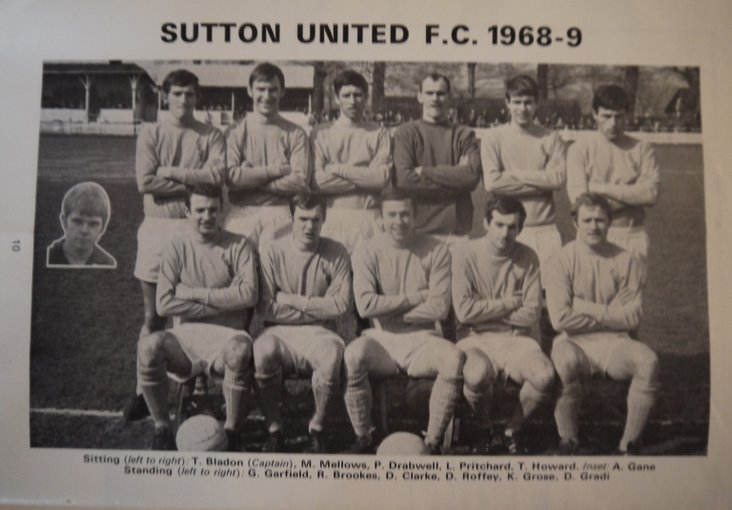 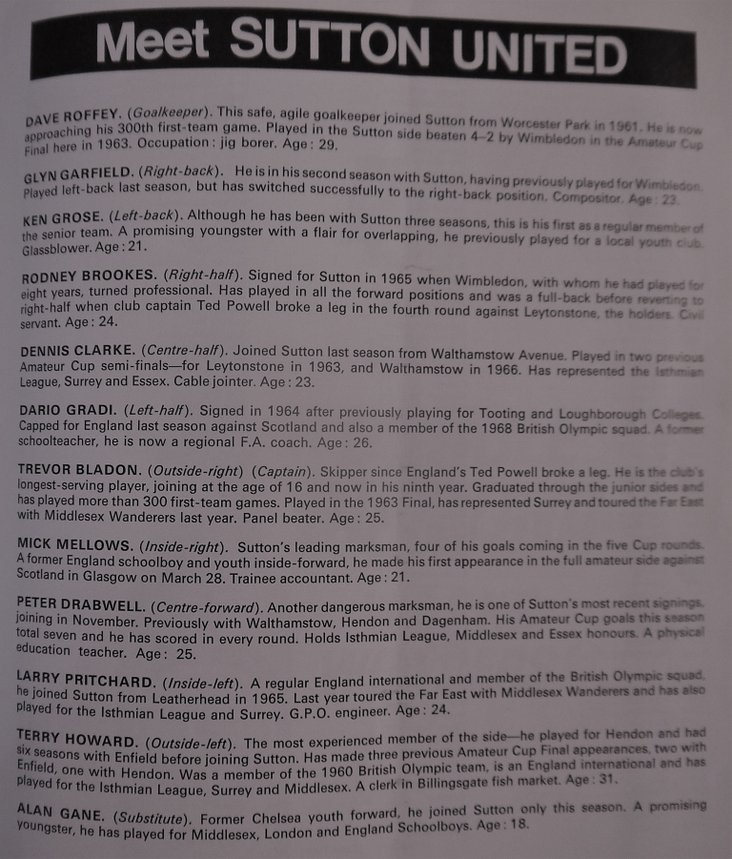 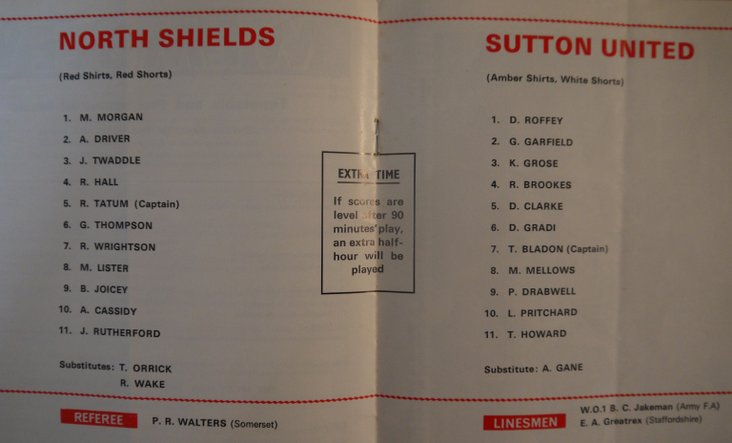 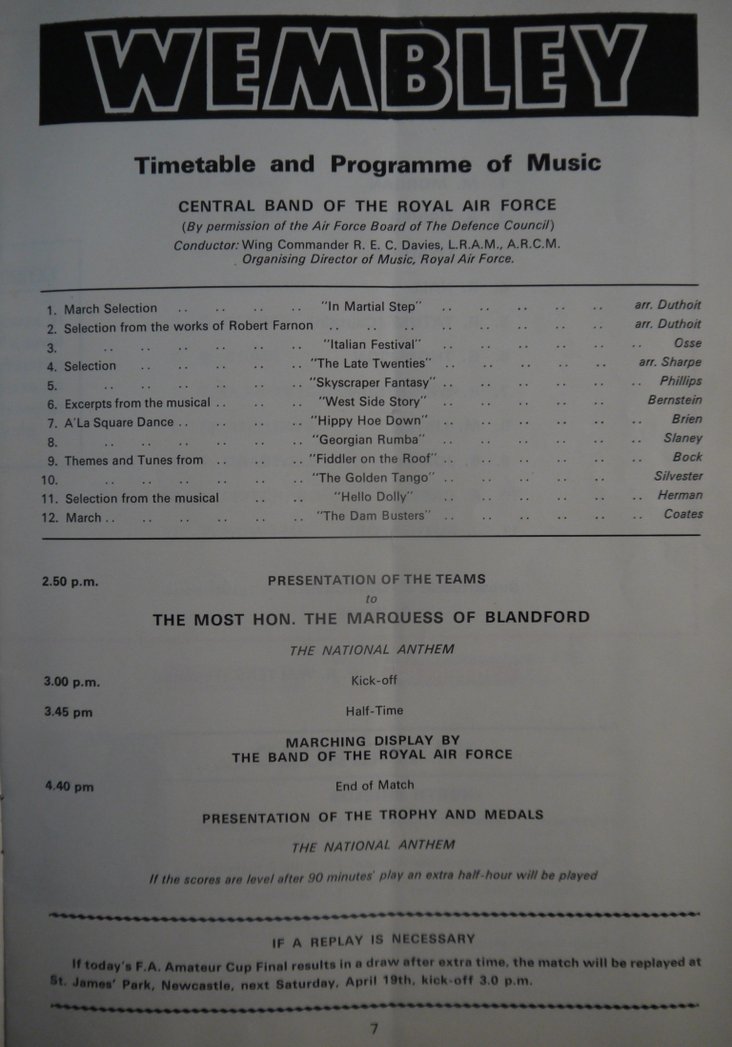 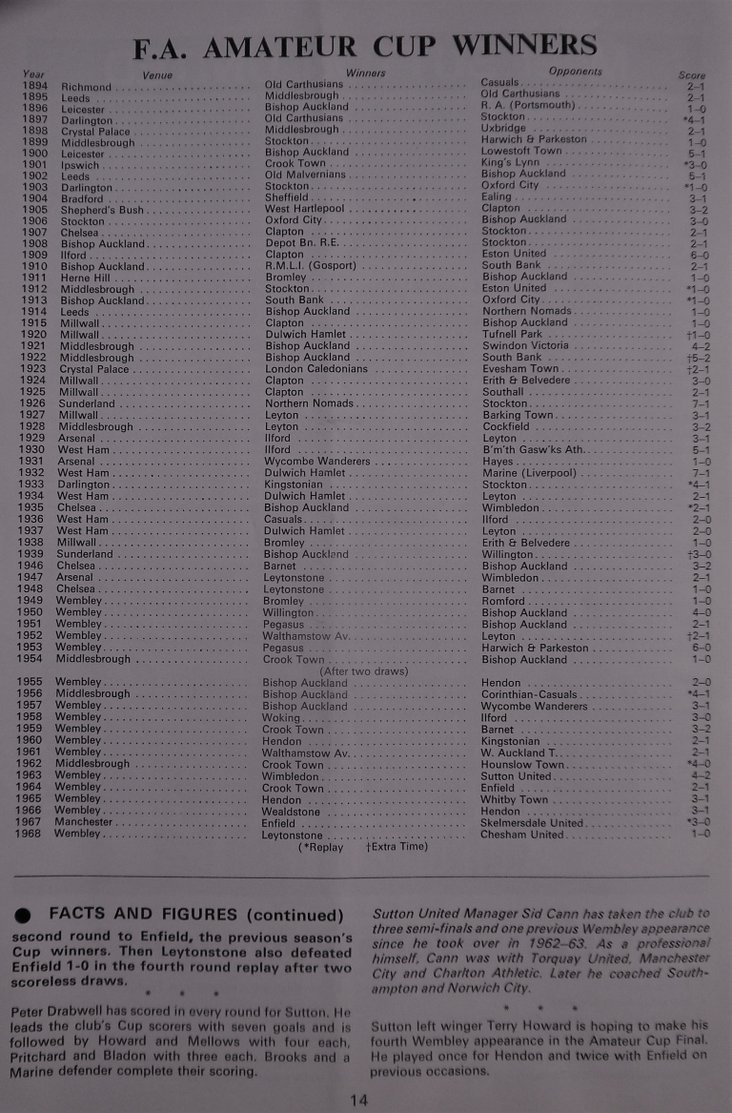 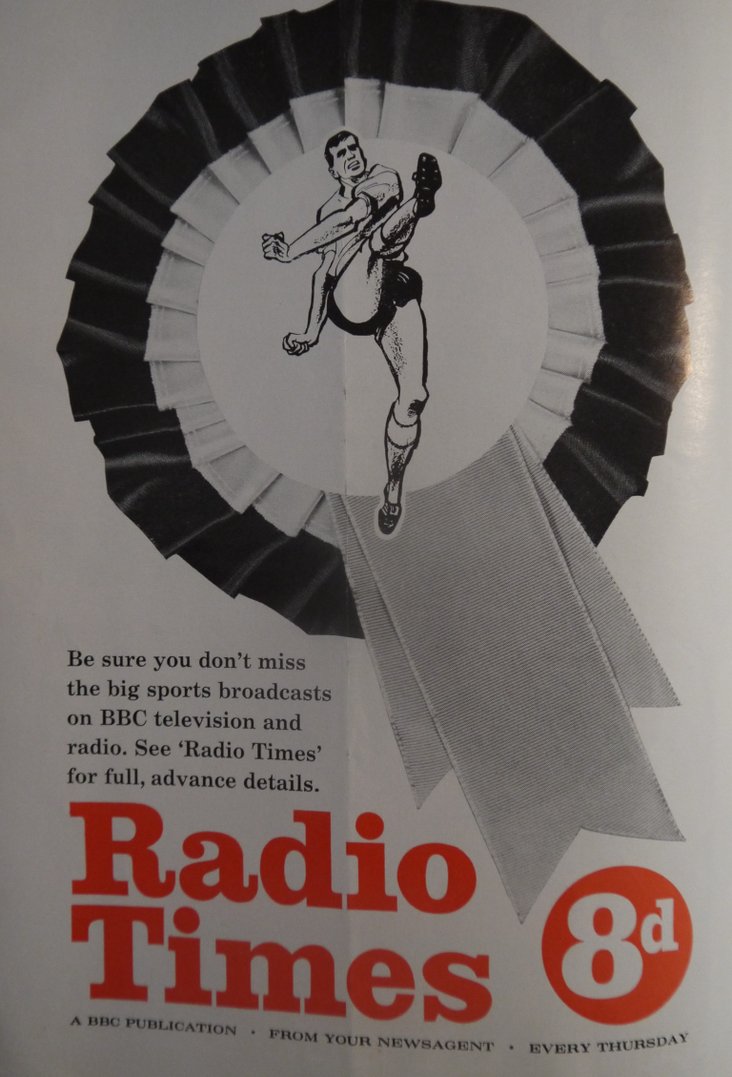 Look at the price, and compare with the cost of the Radio Times you bought for Christmas.

 The best of 2020: David Powell, Canvey Island Gulls fan David takes us back to a day when his side delivered a Cupset against Cray Wanderers