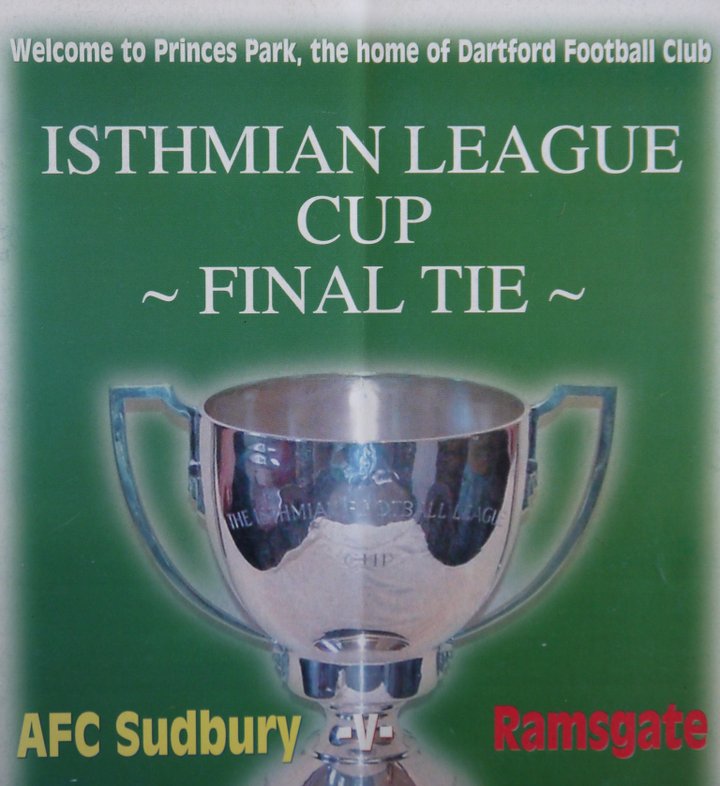 We head back twelve years to look at the programme from a final which promised much, but delivered a little less- although the side that won won’t mind too much!

On Wednesday April 2nd 2008 AFC Sudbury and Ramsgate walked out at Princes Park, home of Dartford FC, to compete in the thirty fourth Isthmian League Cup Final. It was the first such final to be played at Princes Park, but that wasn’t too surprising given the ground had only been open since November 2006. It was the first time the Rams had visited, but the Yellows had previous experience, having played Dartford there in the North Division six and a half months previously- a match which they had lost by one goal to nil.

Ramsgate were the favourites. The Rams were in their second season in the Isthmian Premier Division under manager Jim Ward, and at the time of kick off were in sixth place, pushing strongly for the playoffs- although twenty five points behind runaway leaders Chelmsford City, who had one hand and four fingers on the trophy. But the Rams weren’t overwhelming certainties as the Yellows, under Mark Morsley (some things never change!), were in second place in the North Division, six points behind leaders Dartford but with two matches in hand. AFC Sudbury had also defeated three Premier Division clubs to reach this stage, including the champions-elect, but would be badly hampered by the loss of twenty seven goal forward James Rowe through injury.

The Yellows run to Princes Park looked like this: 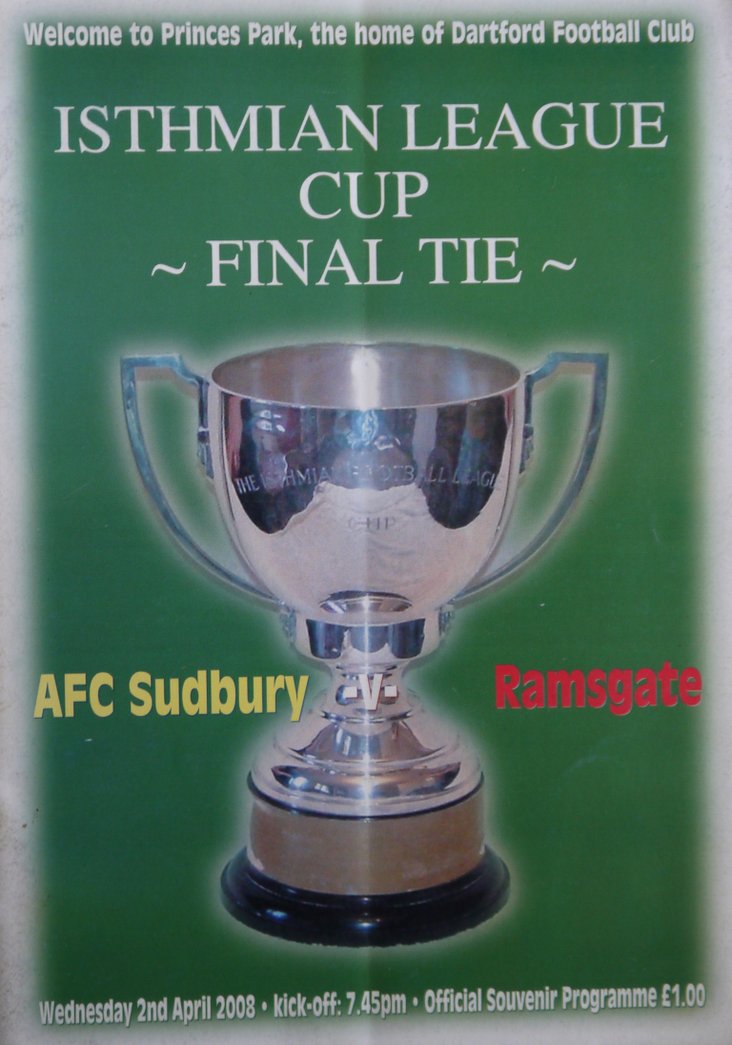 The Rams journey to the final took this shape:

The match referee, Matty McLaughlin, later went on to be an Assistant Referee at a much higher level, working in the Championship and running the line in the 2009-10 League One Playoff Final, where Millwall defeated Swindon Town by one goal to nil (Former Greenwich Borough and Ashford United boss Gary Alexander was on the bench for Millwall). He was assisted by Paul Kelly and Chris Breakspear. Fourth Official Carl Berry was also soon refereeing in the Championship. 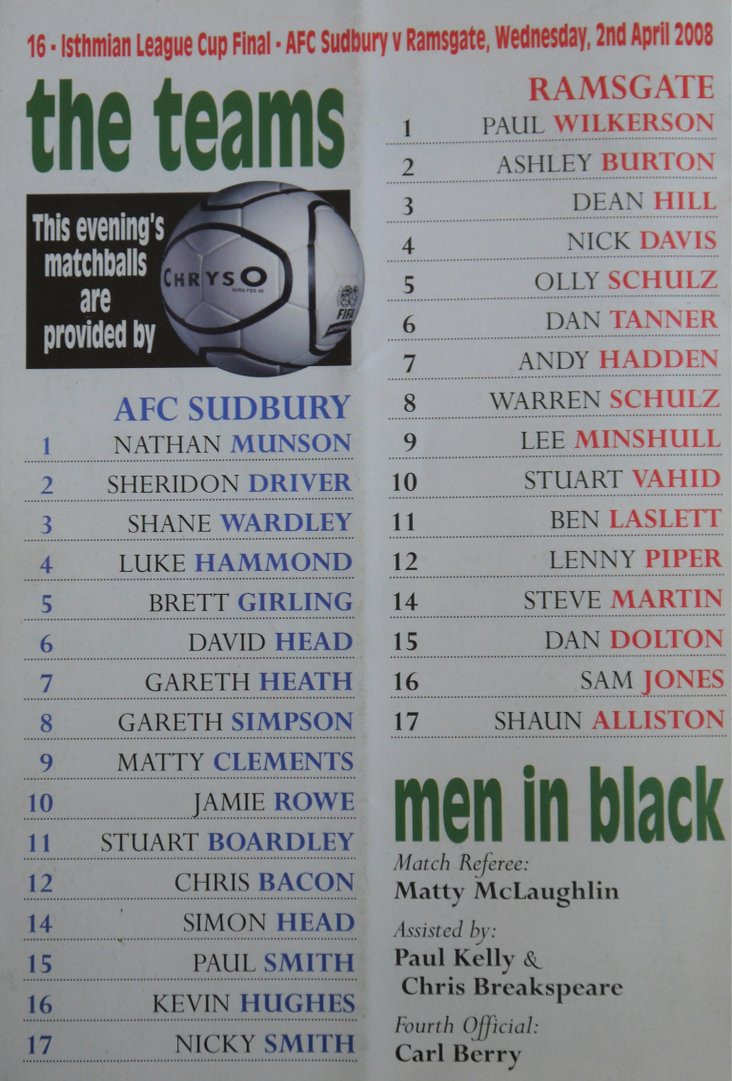 How they lined up

The sides lined up as follows, in front of a crowd of five hundred and sixty eight: 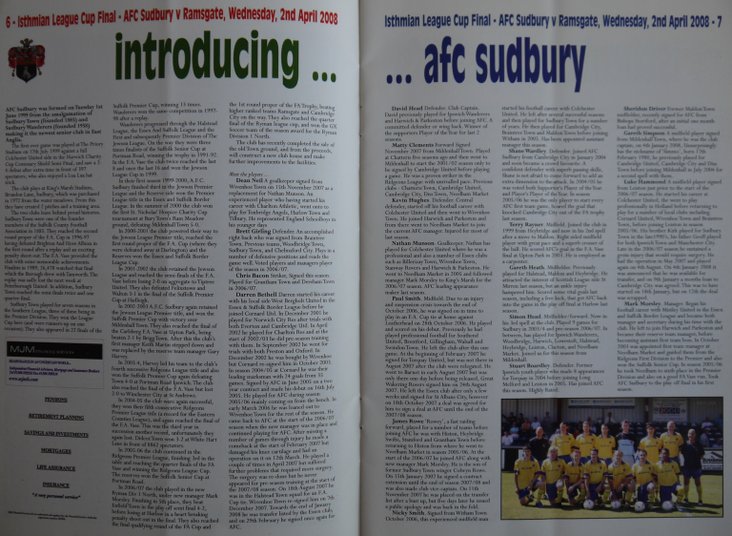 The match didn’t provide either vocal set of supporters with too much to sing about- not that they were any quieter as a result, providing their sides with great encouragement. Forty five minutes, ninety minutes, one hundred and twenty minutes came and went without a goal. So we got to the dreaded penalty shootout, and finally the ball hit the back of the net. The first eight penalties were all made to count, and with the score at four-all Shane Wardley stepped up for Sudbury, only for Wilkerson to dive to his left and make a save. Stuart Vahid stepped up with a chance to win the game for the Rams, and did exactly that, hitting his penalty into the roof of the net. Ramsgate had emerged victorious.

The Rams were to go on and finish the Premier Division season in fifth place, qualifying for the playoffs- even now, their highest ever league position. Sadly the playoffs were a step too far, and they fell two-one to Staines Town in the Semi-Final, before the Swans lost the Final by the same scoreline to AFC Wimbledon. They were relegated back to the South Division the following season, and as yet haven’t been back to our top flight.

The Yellows went off the boil but still finished the season in second place to qualify for the North Division Playoffs, however they fell to a three-two extra time defeat at home to Canvey Island in the Semi-Final. Canvey went on to take promotion, defeating Redbridge on penalties in the Final. Manager Morsley resigned in May. They were then moved sideways to the Southern League Midland Division, very much against their will, and remained there for two years before returning to the North Division- where they have remained ever since, apart from one season in the Premier Division which saw them immediately relegated. 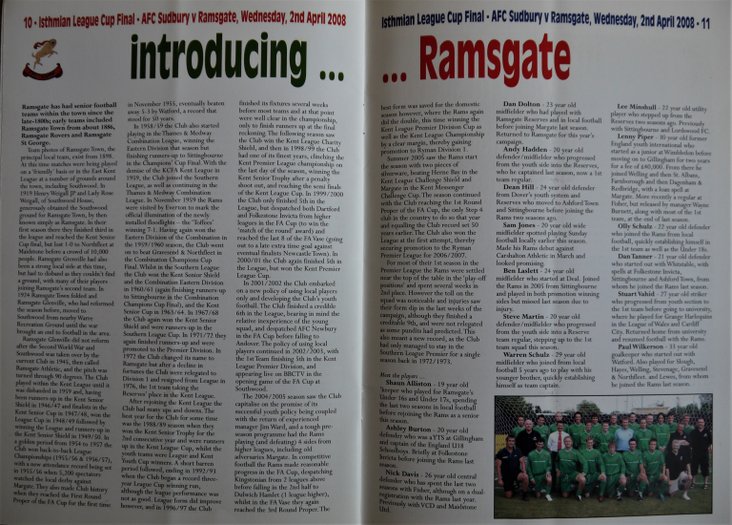 We asked for your memories of the match, and Yellows boss Mark Morsley's were rather bittersweet:

"We were robbed. Played without James Rowe and Matt Clements, Heathy played half fit. Darren Bethell played upfront on his own and was brilliant. Lost Kev Hughes at half time and Chris ‘Lurch’ Tracey came on and was also brilliant. Missed 1 pen. Gutted!!"

We hope that Ramsgate fan Clive Fane has now got a new job:

"Will never forgive my manager for refusing to let me take the day off to go." 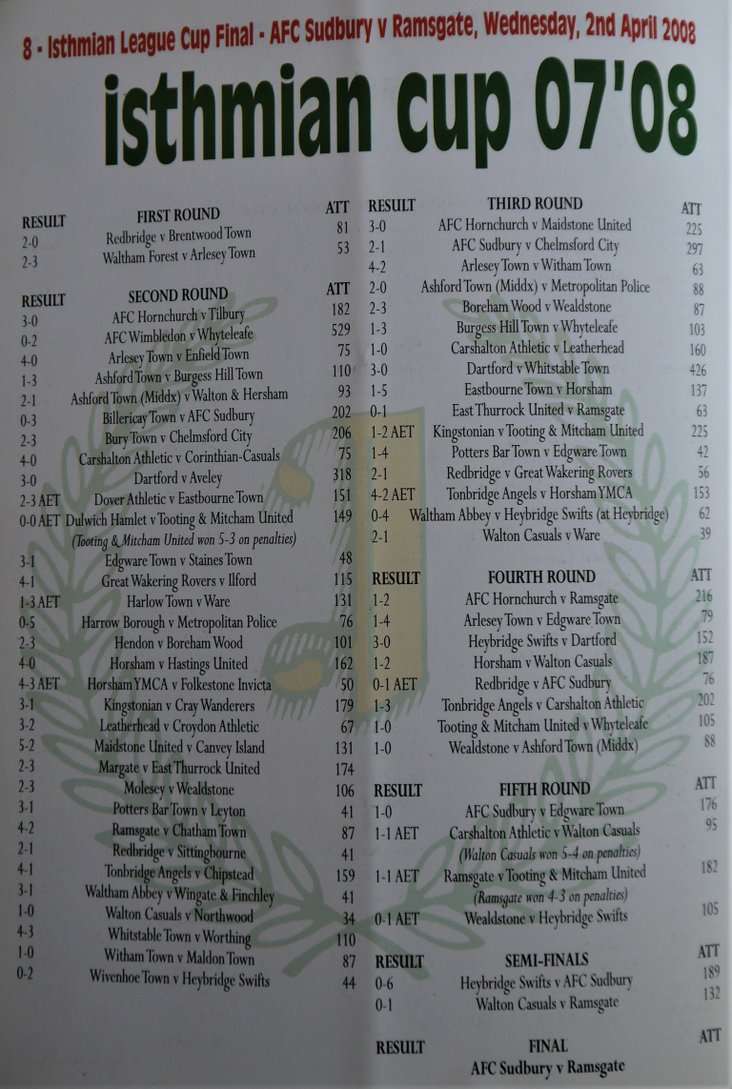 The road to Dartford!

Matt Smith (no, not the one who used to be Doctor Who), added:

"12 years ago, blimey- great night even if we (AFC Sudbury)
did lose."

"I was there, and my son Sam Davies was mascot for AFC Sudbury. Think AFC lost on penalties?" 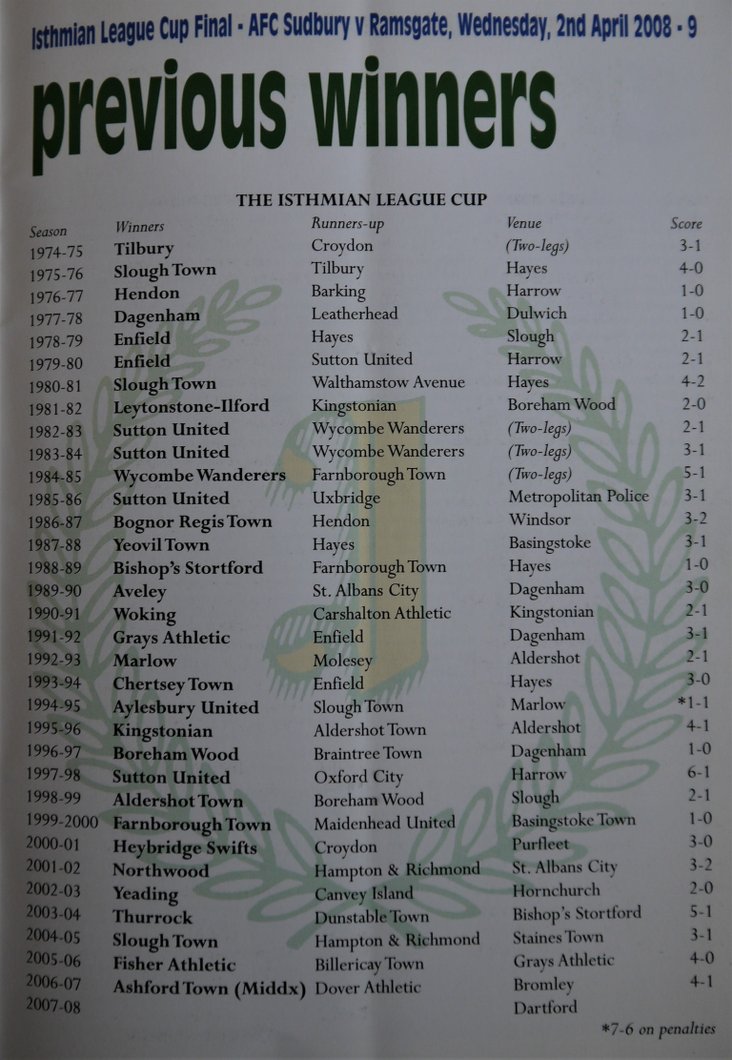 Finally, Anthony Munday shared a tweet with three images of the night, which you can see here. A Ramsgate fan, he added:

"A remarkable night for everyone connected with the club." 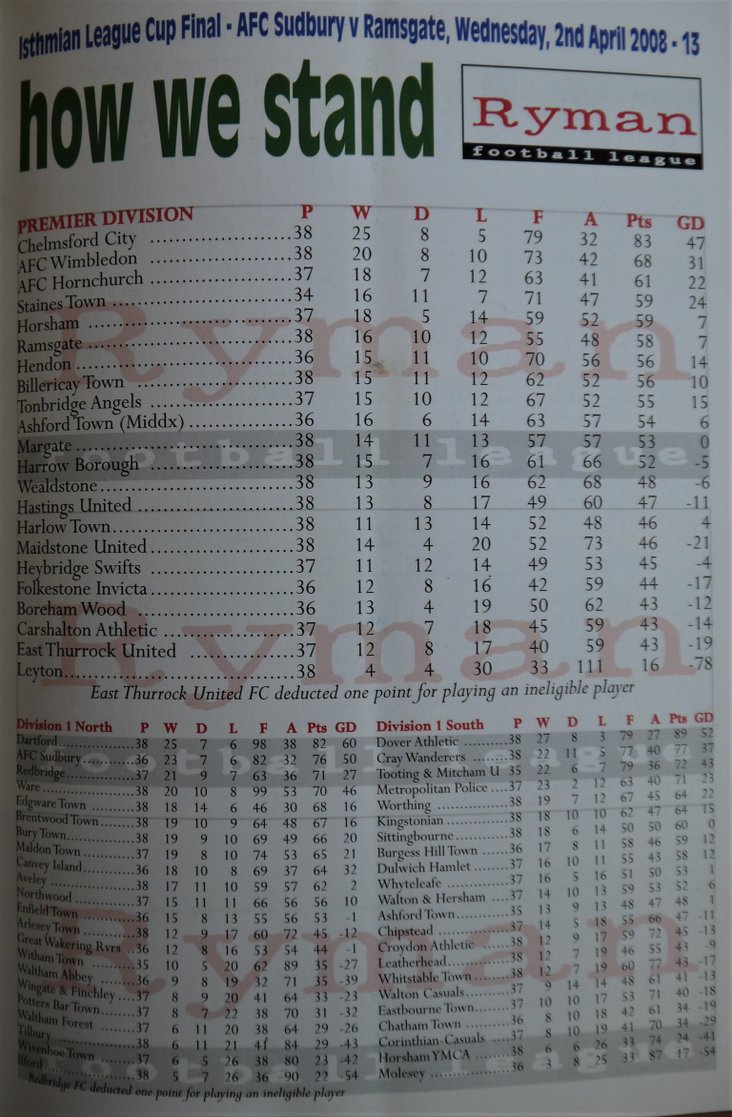 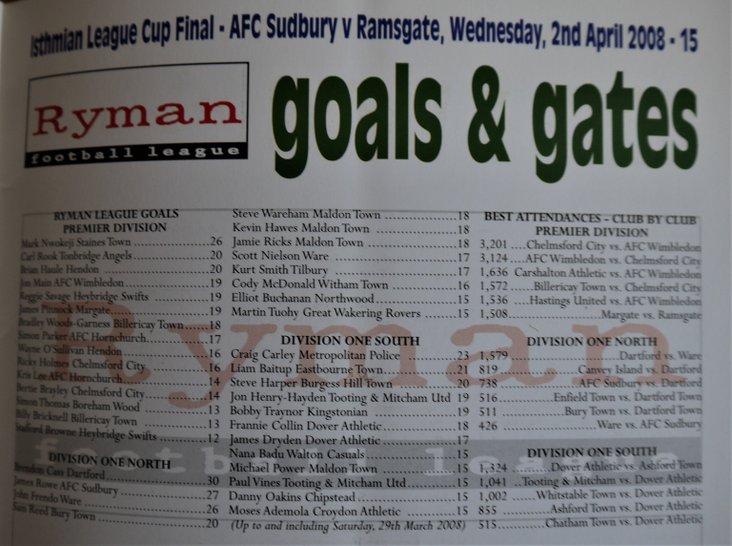 Goals and gates from the season so far