Four-goal K's on top for now 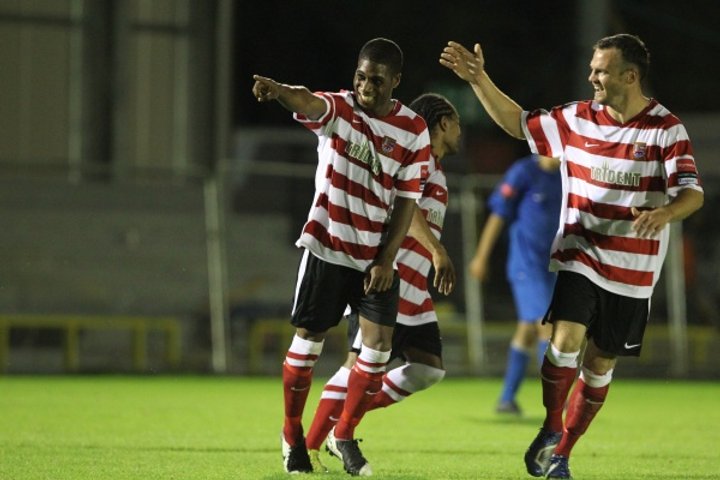 KINGSTONIAN (pictured by Andy Nunn celebrating one of their goals) moved to the top of the Ryman Premier table, at least for 24 hours, with a 4-2 home win over Harrow tonight (Monday).

It's the fourth successive year that K's have played at home on the first Monday of the season and those four games have produced no fewer than 27 goals.

By those standards tonight's game got off to a slow start: it was 15 minutes before Simeon Akinola put the visitors ahead.

Both sides had plenty of chances in the rest of an even and exciting first half but K's gained the upper hand after the restart.

McCollin met an accurate cross from Charles Ofosu-Hene with a splendid header to put K's ahead in the 53rd minute.

In their next attack Jamie Jackson pulled off an athletic save from Lodge but in vain, as the resultant corner found its way to Aaron Goode 20 yards out and he fired the home side into a 3-1 lead.

Jackson made several other top-class saves before pulling down the dangerous McCollin in the 75th minute, allowing Lodge to convert another penalty.

Harrow pulled one back in the 90th minute thanks to a free-kick near the halfway line from Gary Jones which everyone missed.

Home keeper Rob Tolfrey was left somewhat red-faced by that but he was at his best to deny Jones another moments later, saving K's from what could have been a worrying final minute or so.

 Anvils hand out five-goal hammering WHAT a difference a year makes! Last season it took Crawley Down nine games to collect their first Ryman South point. Today the Anvils sit proudly at the top of the table after their 5-0 thrashing of Burgess Hill last night (Tuesday) took their haul to

Jose's day as Ambers upset favourites  THERE was no shortage of surprises in Ryman North, starting at Sudbury where the hosts, widely reckoned to be the title favourites, crashed to a 3-1 home defeat by Cheshunt.