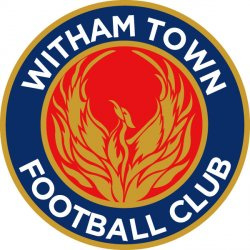 Witham Town have announced that Jack West, Ollie Emsden, Chris Taylor and Ollie Bell have signed on for the forthcoming campaign.

Ollie B made twenty eight appearances last season, most of them in the number ten shirt, scoring five goals. He previously played for Stansted.

Another midfielder, Ollie E, made twenty three appearances, scoring twice- and they'll need to get him to score more often as they won both games when he found the target, against Hullbridge Sports and Grays Athletic.

Forward Jack played nine times, scoring once, in that famous victory over Romford. He previously played for Billericay Town, Maldon Town, Redbridge, Tilbury and Heybridge Swifts, amongst others.

Chris made seventeen appearances last season. He previously played for Romford and Barkingside, and can play both in midfield and in a more attacking role.

 A World Tour of Kent- Part Six- Folkestone Invicta It was nice to be back at the BuildKent Stadium. Perhaps this is the year we get to return for a promotion party?

Brentwood Town secure seven  There have been a number of new arrivals, but this septet was here last season