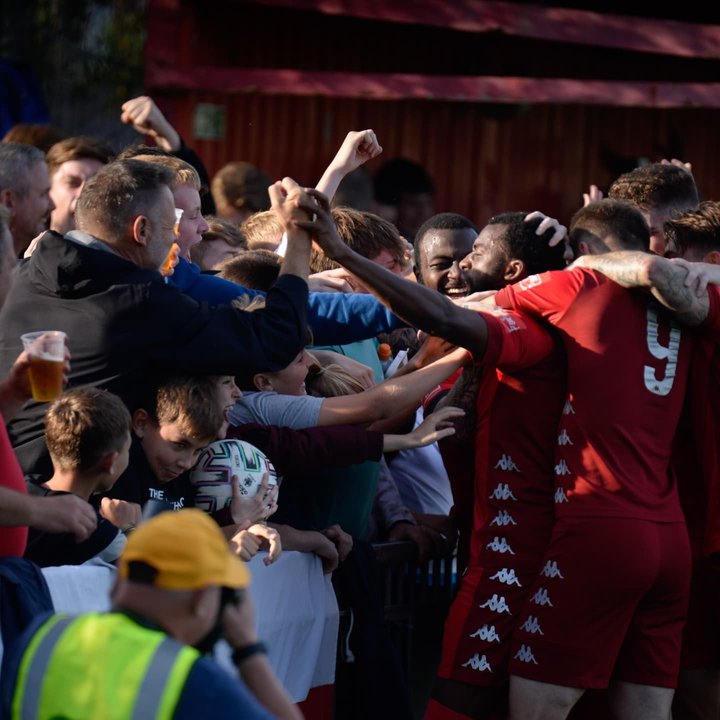 We're not sure we've ever had a set of results quite like today, with two teams hitting seven, one getting six, two scoring five- and losing- and some quite amazing comebacks. It's our round up, and it's incredible.

There’s only one place to start our round up, and that’s at Bishop’s Stortford, where the Blues hosted the Greens as Leatherhead arrived looking to end a run that had seen them without a win since the opening day. Not only did the Tanners not get that win, they were given a good hiding, as Stortford stuck seven goals past debutant keeper Myles Bowman. Archie Jones and Frankie Merrifield made it two-nil at half time, and then after the break the floodgates opened, Jake Cass getting a hat trick- his second of the season- Ryan Charles and Ben Marlow getting the other two. Three hundred and thirty three watched the match, although the Tanners may have thought a more appropriate number was 666.

Leaders Kingstonian had gone three matches without a win before Merstham arrived at King George’s Field, but they put that behind them, winning four-one. Daniel Ajakaiye got the opener on the half hour, but the Moatsiders were level five minutes later through Chace Jacquart. After the break Ollie Cook put the K’s ahead once more, but they had to wait until seven minutes from time to make sure of victory as Cook got another. Gus Sow got yet another penalty in added time to make it four-one- his fifth spot kick of the campaign so far.

Worthing had an early chance for revenge against the side who knocked them out of the FA Cup, as Corinthian-Casuals arrived at the Sussex seaside- and they took that chance, moving up to second place, albeit by scoring the only goal of the game. It was a little rough on Casuals, that goal coming in the very last minute from the spot, Mo Diallo with it.

Our headline image comes from Marcus Hoare at Worthing- who did his usual remarkable job with the camera despite losing his dad Steve this week. Much love to Marcus and to his family- Steve was a Worthing stalwart; a lovely, talented man who helped make every press trip to Woodside Road to cover a match an absolute joy whatever the result.

Potters Bar Town recorded the comeback of the day at Folkestone Invicta. Invicta went three goals up through Adam Yusuff, Ian Draycott and Scott Heard, the third coming in the fifty third minute, and then Ben Ward Cochrane got into the act, pulling two goals back within three minutes. Samson Esan got the equaliser on seventy six minutes, and the two shared the points, Invicta remaining unbeaten in third place whilst the Scholars are sixteenth.

Lewes slipped to fourth place, as Hornchurch arrived at the Pan and left with the points. Sam Higgins got his tenth of the campaign as early as the fifth minute, Liam Nash doubled the advantage five minutes later, and Jili Buyabu made it three and effectively ended the contest on the hour. Joe Tayor got one back just before the end, but the Urchins are only two points behind them in eighth.

Margate are back in the top five after victory over Enfield Town, coming from behind to grab the points. Mo Faal put the Towners ahead ten minutes after the break, but Ben Greenhalgh equalised three minutes later and after thirty two minutes waiting, Godo -Martial Godo- got the winner in the last few seconds.

Haringey Borough are up to seventh, walloping East Thurrock United five-one. The result was even more remarkable when you consider that the Rocks were ahead from the thirteenth minute until the fiftieth. Johnny Ashman got the opener for the visitors, then five goals in eighteen second half minutes through Georgios Aresti, Roman Michael-Percil (2), Alfred Bawling and an own goal made sure the game was over by the sixty eighth minute.

A double from Jordan Cheadle and a third from Lewis White was enough to see Carshalton Athletic ease to three points at Cheshunt, for whom Amadou Kassarate scored; whilst Brightlingsea Regent saw Ken Feyi get two to defeat Cray Wanderers at Hayes Lane- triumphing despite playing eighty two minutes with ten men.

Max Cornhill got the only goal of the game as Bowers and Pitsea defeated Horsham, climbing to fourteenth, whilst Bognor Regis Town came from two down to draw with Wingate and Finchley. The visiting Blues were two up at the break, Bilal Sayoud with his sixth of the season and an own goal doing the damage, and even though Harvey White got one back for the hosts just after the break it looked as if the points were off to North London. Nathan Odokonyero thought otherwise, however, getting an equaliser right at the end. That’s the Rocks fifth draw in eight matches.

Our North Division weekend started last night, as Aveley and Barking met for the third time this month- and the Millers finally began to show what they are capable of, walloping the second place Blues by four goals to nil. Shad Ngandu and George Sykes got two in the first half, Alex Akrofi and Manny Ogunrinde added the next two just before the end.

Heybridge Swifts won for the first time this season- and their fans will think they couldn’t have picked a better day for it, as the side they defeated was local rivals Maldon and Tiptree. The triumph would have felt even better given the winner came in the last minute, Daniel Walker sealing a three-two win. Swifts had been ahead twice by then, Andrew Fennell and Dylan Logan seeing their efforts cancelled out by Shomari Barnwell and Charlee Hughes, but the winner came so late the Jammers had no time to reply.

Unbeaten Bracknell Town hosted unbeaten Marlow in what we thought would be our Pitching In Isthmian South Central match of the day, and by the end only one of them was unbeaten- Marlow, who got the only goal of the game, Nnamdi Nwachuku moving them to within a point of the Robins with two games in hand. Marlow have won every match they’ve played this season, and haven’t yet conceded a single goal!

We thought that would be our match of the day, but given the other three saw twenty four goals between them it wasn’t even in the top three!

Second place Uxbridge, whose first defeat of the campaign came against the Robins last weekend, travelled to Northwood and fired home seven goals! Anthony Mendy got two to make it ten for the season, Mahlondo Martin got another two, Alex Witham, Juwon Akintunde and Lenny Farhall got the others- and Shakheel Morris got one back in added time.

Hanwell Town welcomed Staines Town to the Powerday, and won by the odd goal in ELEVEN! Making that even more remarkable, the Geordies were FOUR GOALS DOWN after seventeen minutes, Sheridan Campbell with one of them and Noah Amissah with two more (we don’t know who got the first one). It was somehow four-all by the break, Ogo Obi, George Nicholas, Adam Laaref and Callum Duffy drawing the hosts level. After the break Obi got his second and the Geordies fifth, Campbell equalised for the Swans, and then Obi made it six-five. Somewhat surprisingly the last twenty one minutes saw no further goals! The Geordies are up to ninth.

Ashford Town and Westfield traded goals at Woking Park, the Tangerines coming out three-two winners. Jack French opened the scoring for the visitors from the spot just after the half hour, Afolabi Soyemi-Ololade equalised almost immediately, and Harry Woodward scored Town’s second within two minutes of the equaliser. Eight minutes after the break Tayshan Hayden-Smith equalised for Westfield, but the Tangerines took the points twelve minutes from the end, George Spiers with the winner.

Sittingbourne climbed to sixth place with victory over Phoenix Sports. Ahmed Abdulla put the Brickies ahead just before the break, Kane Rowland made it two just after it, and although Byron Walker got one back for the visitors with twenty minutes left the equaliser didn’t come, and the points stayed at Woodstock.

Whitehawk were magnificent last weekend when defeating Step Two Slough Town in the FA Cup, but they were less magnificent this time around when facing Lancing. James Fraser put the Hawks ahead, but they weren’t ahead for long before Finn Daniels-Yeomans equalised, and with thirteen minutes left Matt Daniel got the winner for the yellows, sending them up to fifteenth.

Finally, VCD Athletic hosted Sevenoaks Town. Vickers had only lost once in the league this season but had drawn their last three league matches one-one and hadn’t tasted victory since August 21st, when they defeated Raynes Park Vale in the cup. Oaks had lost three of their last four and conceded thirteen goals in the process- and they conceded another five today, an own goal and four from Marcus Elliott, Anthony Adesite, Youseff Bamba and Joe Bingham seeing the hosts up to eighth.

It was FA Trophy time again for a number of our Step Four clubs, many of whom played each other.

Ashford United hosted Chalfont St Peter and triumphed on penalties after a one-one draw, a late equaliser for the Nuts and Bolts- from Josh Wisson- giving them the chance to do that after Shamal Edwards had given the Saints the lead.

A Matt Price hat trick helped Canvey Island to a four one win over Coggeshall Town; Evans Kouassi got their other goal and Sam Bantick got a late, late consolation for the Seed Growers.

Chichester City also got four, against managerless Whitstable Town. Corey Heath got the opener after forty minutes, Callum Overton made it two before the break, and after the break Overton and Tyrone Madhani got two more. Another South East side, and another side in green, Corinthian, went through on penalties five-four after a one-one draw against North Division leaders Grays Athletic, David Knight opening the scoring for the visitors, Ryan Sawyer equalising for the hosts. Hastings United broke a trend by being from the South East Division and not in green, but they continued the pattern by defeating AFC Dunstable three-nil. A second half show from Ben Pope, with two, and Sam Hasler did the damage. Eight hundred and twenty three were in the Pilot Field to watch.

Ramsgate got five for the second match in a row, Jordan Chiedozie with two, Danny Lear with another two and Ashley Miller with the first one as Sutton Common Rovers were walloped; whilst Dereham Town also scored five at Sporting Khalsa- and still lost! Toby Hilliard got a hat trick, Adam Hipperson got two, but the hosts got six.

Great Wakering Rovers won an all-North Division tie against Stowmarket Town on penalties, after Mitchell Gilbey and Reggie Lambe got a goal each for the visitors and the hosts, and Hythe Town also got to take part in a penalty shootout, but with not such a positive outcome as they lost at Welwyn Garden City after a three-all draw. Tom Walmsley, Kane Smith and Liam Smith scored for the Cannons.

 Make it Snappy! Saturday 25 September 2021 Lots of photographers do phenomenal work promoting our clubs, so we thought we'd promote them in return. Here are some shots and some links from yesterday's matches.

Can K's get back to winning ways? If not, there are four sides waiting to pounce!  We've a big day in the Pitching In Isthmian Premier. Who will end the day at the summit?